In a recent international survey, nearly nine in 10 Americans said if they were experiencing memory loss and confusion, they'd go to the doctor to find out if the cause was Alzheimer's. 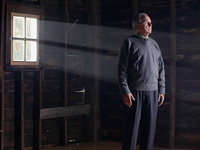 The survey, released in July, didn't ask what people would expect to get from that visit to the doctor. But results did offer a hint: Nearly 60 percent of Americans said they believe there's a reliable medical test that can tell them if they have Alzheimer's; and close to half believe there is now an effective treatment to slow the progression of the disease.

Unfortunately, neither of those things is true — at least not yet. No medical test for Alzheimer's is widely available, and the few drugs used to treat it can temporarily help with some symptoms but don't halt the disease itself.

So the survey results were surprising. "We thought a very substantial number of people would say that they were not sure they would go for an evaluation," says Robert Blendon, a professor of health policy and political analysis at the Harvard School of Public Health, which led the survey along with a nonprofit group.

The public's apparent misconception may stem from a flurry of publicity about Alzheimer's diagnosis, as researchers announce exciting strides toward a reliable test and drug companies vie to bring the first diagnostic tests to market.

In April the Alzheimer's Association and the National Institute on Aging announced new guidelines for diagnosing the disease. These included recommendations for how to use the new "biomarkers" tests that measure two proteins, beta-amyloid and tau, which make up brain "plaques" and "tangles," the signature features of Alzheimer's.

This represents "a special moment in the history of neurology and psychiatry," says Allen J. Frances, M.D., former chair of psychiatry at Duke University. Pinpointing the biological signs of any mental disorder has eluded scientists for decades. Before these tests, Alzheimer's could be confirmed only by an autopsy exam of the brain.

But scientists don't yet understand exactly what various results of biomarker tests mean for each patient or how they can be used to predict a patient's future. While beta-amyloid plaques are present in the brains of all Alzheimer's patients, not everyone with these plaques will go on to develop the disease. Because of such uncertainties, the new guidelines do not recommend the tests be used routinely to diagnose Alzheimer's outside of research settings.

As a practical matter, the tests are not widely available. They involve special procedures such as spinal taps and PET (positron emission tomography) scans and can cost thousands of dollars. Most doctors are not yet familiar with the tests or confident of their reliability. Moreover, Medicare and other insurers don't generally cover these tests to diagnose Alzheimer's. Still, some experts may use them as part of a larger evaluation for dementia. Some patients also may get the tests in clinical trials.

A test for some patients with troubling memory loss could be coming soon.

For now, the recommended evaluation for people with symptoms still rests on talking with the patient and family, administering memory and other mental function tests, and running blood tests and basic brain scans designed mainly to rule out other conditions such as a stroke or tumor. (There are also genetic tests for early-onset Alzheimer's, a rare form of the disease that occurs in people under 65.) Writers of the new guidelines say doctors can usually diagnose Alzheimer's accurately using these traditional methods.

But an Alzheimer's test for some patients with troubling memory loss could be coming soon. Eli Lilly's Amyvid, an injectable radioactive dye that stains amyloid deposits to highlight them on PET brain scans, may be the first Alz ­ heimer's diagnostic product on the market. The U.S. Food and Drug Administration has signaled a willingness to approve it — if the company can ensure those who read the scans are trained to give accurate, standardized results.

The drugmaker says Amyvid would be for older people with mental decline whose diagnosis is uncertain.

Over the years, many doctors have wondered what good could come from telling a patient he might have Alzheimer's, a largely untreatable disease. This attitude, however, is changing, with experts increasingly advocating early diagnosis. They argue that the standard evaluation might instead find a treatable cause of mental confusion — such as depression — and that, even without an effective treatment for Alzheimer's, getting a diagnosis before the disease becomes disabling gives patients time to make choices about how to cope with it.

Another reason to promote early diagnosis: Most Alzheimer's researchers believe that when we find an effective drug, it will almost certainly need to be used early, before damage accumulates in the brain. Indeed, the new guidelines now define a first stage of Alzheimer's, when changes begin in the brain but mental symptoms have yet to develop.

Next: If you could get tested, should you? >>

One of the earliest detectable changes may be the plaques of Alzheimer's. But scientists don't yet know how their presence predicts the descent into Alzheimer's dementia.

Some physicians worry all the talk about early Alzheimer's and the new biomarker tests is getting ahead of the science — and could unleash a wave of premature, uncertain diagnoses of a devastating disease with no cure.

In the recent Alzheimer's survey, two-thirds of U.S. respondents said if it were available, they would get a medical test that would tell them whether they would get Alzheimer's disease — even before they had any symptoms. In fact, no one is now suggesting healthy people with no symptoms be tested for Alzheimer's. As for older people who are showing subtle signs of mental decline, they need to know that the standard evaluation could be ambiguous, says Brian Carpenter, a psychologist at Washington University in St. Louis. But his research has found that patients evaluated at the university's Alz ­ heimer's Disease Research Center actually became less anxious after diagnosis. So did their caregivers. "People are telling us they appreciate having an explanation for the symptoms that they've been having," says Carpenter. "They can move forward and create a plan for their lives." Just because you are starting to experience some mild symptoms, he says, doesn't mean that you can't continue to do things, even work.

For those with no symptoms who worry they may eventually get Alzheimer's, there is no crystal ball test to foretell the disease.

"It will likely be many years before any test can predict precisely who really will get the disease, and when," says Frances, who has helped establish guidelines to diagnose mental disorders. "In the meantime, there will be lots of continued hype about progress in testing," he says. "The best thing most people can do is simply ignore it. Instead of worrying about Alzheimer's, you should make sure to exercise your mind and body, eat well, don't drink too much, and enjoy life."

Katharine Greider lives in New York and writes about health and science issues.