En español | When it comes to infectious bacteria, it's us versus them: survival of the fittest. Unfortunately, human activities have helped create some bacteria that are very fit indeed. These so-called superbugs have adapted to and survived the most powerful weapons we have to combat them — antibiotic drugs. 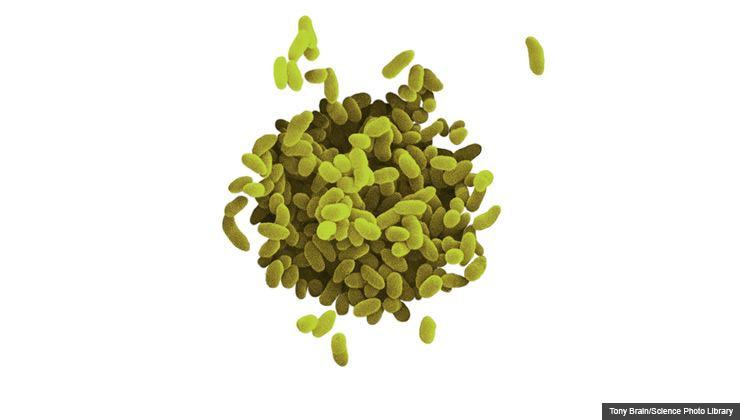 Micrograph of the rod-shaped bacteria "Klebsiella pneumoniae," the new superbug.

The problem isn't confined to hospitals. Garden-variety infections of the ear, urinary tract, skin and lungs are increasingly taking stubborn forms that require more antibiotics or a combination of drugs to cure.

Age-old afflictions such as gonorrhea and tuberculosis — curable for the first time in the 20th century thanks to antibiotics — are getting harder and harder to treat. New strains of one of the most well-known superbugs, MRSA — methicillin-resistant Staphylococcus aureus — are increasingly attacking healthy people outside health care facilities, causing mostly nasty and sometimes invasive skin infections, but also aggressive pneumonias.

Meanwhile, certain bacteria that tend to cause bloodstream and other infections in vulnerable hospitalized patients — bugs with exotic names like Acinetobacter baumannii and Klebsiella pneumoniae — are becoming more lethal, impervious to most or even all of the antibiotics in physicians' tool kits.

"For these cases," says Brad Spellberg, M.D., of the University of California, Los Angeles David Geffen School of Medicine, "we're back to dancing around a bubbling cauldron while rubbing two chicken bones together."

Such "pan-resistant" bacteria are still the exception, but they vividly illustrate what's at stake in attempts to stem the proliferation of drug-resistant bacteria. The latest figures from the U.S. Centers for Disease Control and Prevention (CDC) show that just one of these superbugs, MRSA, caused serious infections in some 82,042 Americans in 2010, killing 11,478. Older people are especially vulnerable if they contract a superbug.

Antibiotics are a cure, and a cause

How have humans let the bugs get stronger? By saturating our environment with antibiotics, the very miracle drugs we created to fight bacterial infection. Some 7 million pounds of antibiotics are sold for human use each year, while 29 million pounds are sold for use in animals, mostly food animals. This, many experts argue, represents gross overuse of the drugs, and only makes it less likely they'll work when we need them most.

Bacteria exist in teeming numbers, reproduce rapidly and can pass genetic traits — including resistance to antibiotics — not only to succeeding generations but also to other bacteria in their environment. The more bacteria encounter an antibiotic, the more readily they spawn hardier versions of themselves capable of overcoming the drug.

Humans and animals are consuming tons of antibiotics.

Inappropriate prescriptions for coughs and colds represent "the number one problem area," says Ralph Gonzales, M.D., who researches antibiotic use at the University of California, San Francisco. "Respiratory infections account for 60 or 70 percent of all antibiotics prescribed in the outpatient setting," he says. "At best, one in five of those infections needs antibiotics." The great majority are due to viruses, not bacteria. Antibiotics have absolutely no effect on viruses. Some patients want an antibiotic even if there's only a small chance it will help, and studies show doctors often acquiesce. Then, rather than take the full course of antibiotics as prescribed, some save pills to use later or share. This may allow germs to persist, develop resistance and come roaring back.

"You don't want to take antibiotics without a physician's advice," says Stuart Levy, M.D., director of the Center for Adaptation Genetics and Drug Resistance at Tufts University. "Don't stockpile them. Don't beg for them. You don't take antibiotics for the common cold."

Taking antibiotics — whether necessary or not — affects the individual and, potentially, others in the community. It changes the mix of microorganisms living in the gut and on the skin, killing sensitive bacteria and giving drug-resistant germs a chance to take hold.

The klebsiella pneumoniae bacteria is highly resistent to antibiotics.

1. Make sure your doctor knows you want an antibiotic only if it's absolutely necessary. Don't insist on antibiotics for colds or flus.

2. When prescribed an antibiotic, take all the pills, even if you feel better. Don't share or save antibiotics.

4. Wash your hands frequently; plain soap and water are just as effective as antibacterial soaps. Widespread use of those cleansers in healthy households might actually promote the development of resistant bacteria.

For example, research suggests that taking commonly prescribed antibiotics increases a person's own risk of harboring or being infected with MRSA. Recent or current treatment with antibiotics is the single biggest risk factor for infection with Clostridium difficile — C. diff — drug-resistant bacteria found mostly in health care facilities that can cause severe diarrhea. Conservative estimates link this bacteria to at least 14,000 American deaths a year.

Like any bacteria, resistant bugs can also be passed to household members and others. One study found that family members of an individual taking antibiotics for acne were more likely to have drug-resistant acne germs on their skin.

The CDC estimates that in hospitals, nearly half of all antibiotic prescriptions are inappropriate. "Antibiotics are sometimes given when they are not needed — for example, sometimes patients are admitted to the hospital with a diagnosis of pneumonia and started on antibiotics, but it turns out they have heart failure," according to Arjun Srinivasan, M.D., medical director of the CDC's Get Smart for Healthcare educational program on antibiotic use.

Many hospitals have implemented "stewardship" programs to cut inappropriate antibiotic use and reduce drug-resistant bacteria in the hospital. Studies show well-run programs can have a real effect.

Human medicine isn't the only area where antibiotics are too liberally applied. Many cattle, pigs and poultry are given antibiotics, not just to treat illnesses but also to prevent the spread of disease when large populations are kept in confined spaces, and, most controversially, to promote faster growth. Often these drugs are the same as or very similar to those used to treat people.

"It isn't the people or the animals that become drug-resistant," says Gail Hansen, a veterinarian and senior officer of the Pew Campaign on Human Health and Industrial Farming. "It's the bacteria. And we're sharing the bacteria."

One way of sharing the superbugs is by eating contaminated meat. Last year, 136 people in 34 states got sick and one person died after eating ground turkey carrying a strain of salmonella resistant to multiple antibiotics. Farms themselves may also spread the bacteria. Most of the bacteria end up outside the animal, as "poop," Hansen says. "Where does that poop go? It goes in the water. It goes into the soil. The soil dries and it gets aerosolized. Everybody's downwind or downstream from someone else. There's also person-to-animal contact, so farmers and workers and their families can be exposed. It gets all over pretty fast."

It's not clear how much agriculture contributes to antibiotic resistance. But the U.S. Food and Drug Administration recently issued new guidelines that call for a halt to "production uses" of antibiotics in food animals — to enhance growth, for example. Increasingly, experts in antibiotic resistance see the problem as one that's multifaceted, global - and growing.

"Resistance is produced and amplified by the misuse of antibiotics," says Levy. "There are lives being lost. And the solution is to get … antibiotics out of the environment as best we can."

Katharine Greider is a freelance writer in New York who reports on health and science.

Visit the AARP home page for great deals, and tips on keeping healthy and sharp.