Obesity, of all lifestyle factors, has the greatest impact on the hormones that increase a postmenopausal woman's risk of breast cancer, according to a new study published in the British Journal of Cancer.

Researchers analyzed 13 previous studies involving some 6,300 postmenopausal women to evaluate how smoking, drinking, weight gain and other lifestyle elements affect levels of sex hormones linked to breast cancer. They found that obesity, by far, appears to have the greatest influence. "Weight does increase your risk, and it looks as if it does that by increasing the hormone levels,"says Gillian Reeves, an epidemiologist at Oxford University and co-author of the July 20 study. 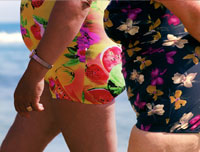 The researchers looked at the women's body mass index (BMI), a calculation of weight divided by height. A BMI of 30 or more is considered obese, and a BMI in the 25 to 30 range is overweight.

The new study, one of the largest to date, adds to a body of evidence linking obesity with increased levels of hormones known to cause breast cancer, says Brian Henderson, a professor of preventive medicine and neurology at the University of Southern California's Keck School of Medicine, who was not involved with the study.

Women who are overweight but not obese also have elevated levels of sex hormones.

"In postmenopausal women, the major source of estrogen in the blood is associated with body weight," says Henderson. "The heavier you are, the higher your levels of sex hormones and the higher your risk for breast cancer."

While some known breast cancer risks, such as age and family history, cannot be changed, postmenopausal women can reduce their breast cancer risk by healthy eating, exercising and maintaining an ideal body weight, says Joanne F. Dorgan, associate professor at Fox Chase Cancer Center in Philadelphia, who was an author of one of the studies reviewed in this larger analysis.

The new study also found that postmenopausal women who consume 20 grams of alcohol or more a day — the equivalent of 1 1/2 to two drinks — also had increased hormone levels.

The effect of smoking on hormones was inconclusive. And reproductive factors — including a woman's age when menstruation began and when she had her first full-term pregnancy — do not appear to have a significant effect on postmenopausal hormone levels, the researchers reported.

You may also like: Exercise, fitness are important for longevity. >>