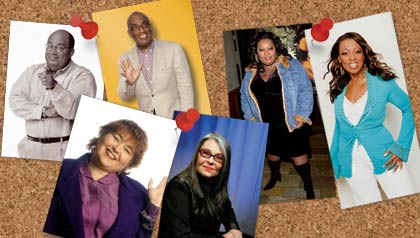 En español | After years of struggling to lose weight, Julie Hartje, 58, decided it was time for desperate measures. Almost 100 pounds too heavy, she knew that being obese put her at increased risk of heart disease, which runs in her family. And she'd already been diagnosed with type 2 diabetes, almost certainly a consequence of being too fat.

Last fall, Hartje underwent gastric bypass surgery. "I didn't feel like I had a choice," says Hartje, who lives in Beloit, Wis.

One of several forms of bariatric (weight-loss) surgery, gastric bypass is the most complicated. Surgeons create an egg-size pouch out of the stomach, reconnecting it to the small intestine. The operation restricts how much food people can eat and also bypasses portions of the intestine that absorb food, so some fats and sugars pass through without being digested. The surgery reduces the size of the stomach — so people feel full on much less food — and changes the way the body absorbs nutrients.

Some 220,000 bariatric surgeries were performed in the United States last year. And while surgery may appear to be an extreme method for addressing America's growing weight problem, three decades after researchers began to track an epidemic of obesity and type 2 diabetes, many experts say that it is the only reliable treatment. Dieting and exercise may work for a small percentage of people. "But studies show that most people long-term lose only a few pounds," says Nestor Villamizar, M.D., a bariatric surgeon at Duke University Medical Center in Durham, N.C.

Gastric bypass surgery, on the other hand, can cause people to lose 80 percent or more of their excess weight. And to the surprise of many researchers, this surgery reverses type 2 diabetes in many patients — often immediately after surgery, before they begin to lose weight. Among obese patients with type 2 diabetes who undergo gastric bypass surgery, studies show that 86 percent see significant improvements in blood sugar control. In 78 percent, the signs of diabetes vanish entirely. No other treatment for this potentially deadly disease has been shown to work as well.

The operation also has been shown to lower blood pressure, improve cholesterol levels and relieve obstructive sleep apnea, a common breathing problem associated with obesity. It can even help the heart. A recent report from researchers at the Medical College of Georgia showed that, after gastric bypass surgery, enlarged hearts often return to more normal shape and function.

Next: Who should be considered for bariatric surgery? >> 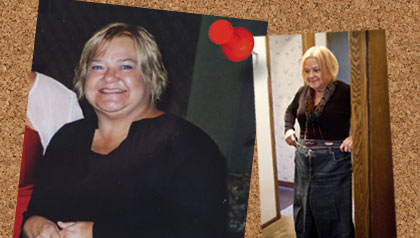 Bariatric surgery is winning respect. "There's been deep skepticism about surgery for weight loss, in part because obesity hasn't been officially viewed as a disease," says surgeon David R. Flum, M.D., a professor at the University of Washington School of Medicine. "But type 2 diabetes is widely accepted as a disease, and one that can lead to blindness, kidney failure, amputations. Since surgery can reliably reverse diabetes in people who are seriously overweight or obese, we should be offering them that option."

With the astonishing reversal of type 2 diabetes in many patients, some experts say the bariatric procedures should be an option even for people who aren't morbidly obese.

Experts use body mass index, or BMI — a combined measure of height and weight — to determine who should be considered for bariatric surgery. A BMI of 30 or more is obese. Guidelines from the National Institutes of Health say bariatric surgery is an option for anyone with a BMI of 40 or higher. (A woman 5 feet 4 inches weighing 235 has a BMI of 40.3, for example.) People with a BMI of 35 to 39 and a medical condition related to obesity, such as type 2 diabetes, also are candidates.

Besides gastric bypass, the other common weight-loss surgery and the least invasive is gastric banding, the option chosen by reality TV star Sharon Osbourne. Surgeons place a hollow silicon band around the upper stomach, creating a small pouch, which drastically restricts the amount of food that can be eaten at one time. The Food and Drug Administration recently approved the use of gastric bands for patients with a BMI between 30 and 34 and medical complications related to obesity.

Some bariatric centers require patients to go on a weight loss and exercise regimen before the operation, to prove they're willing to make lifestyle changes. A growing number of insurers require prospective patients to go on supervised liquid diets and to lose some weight before they'll cover the costs. But critics say some insurers set increasingly strict requirements to discourage people from getting bariatric operations. "There's no evidence that dieting and losing weight before surgery improves outcome," says Michael Jay Nusbaum, M.D., chief of bariatric surgery at Morristown Memorial Hospital in New Jersey.

Next: What's the most popular form of bariatric surgery? >> 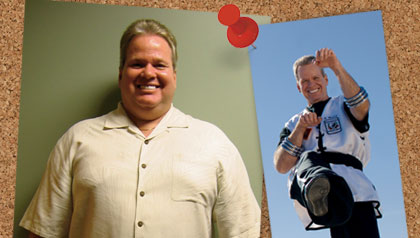 Before and after pictures of Bill Kelly, who turned to bariatric surgery to combat obesity.

Gastric bypass remains the most popular form of bariatric surgery, followed by gastric banding, according to Bruce M. Wolfe, M.D., president of the American Society for Metabolic & Bariatric Surgery.

"Patients typically choose gastric banding because it's less complicated and because the band can be removed, so it's also reversible," says Wolfe, who also serves as chairman of the National Institutes of Health's research consortium on weight-loss surgery. People who are at high risk for complications from surgery may be candidates for banding, as are patients who have had abdominal surgery and may have scarring that makes a bypass difficult. "But while bands pose the least risk, they're also less effective than gastric bypass in terms of weight loss and diabetes control," says Wolfe.

In a recent study of 82 gastric banding patients who were followed for 12 or more years, nearly half had to have the bands removed because of complications. Osbourne had hers removed after she lost weight.

Some patients try gastric bands and, if they don't work, go on to have gastric bypass surgery, although doctors discourage that as an option. "If we're going to do a band, we want to make sure the patient is fully committed to making it work," says Wolfe.

Like any operation, banding and bypass surgery pose risks, including infection and leakage of stomach contents into the abdomen. Yet studies show the procedures have become far safer since first introduced in the late 1980s. "At this point, we can say that the risks of being morbidly obese far exceed any risks from the surgery," says Guilherme M. Campos, M.D., associate professor of surgery at the University of Wisconsin-Madison. He points to research showing that many people denied coverage of bariatric surgery by their insurance companies later develop serious complications, including type 2 diabetes and heart disease.

Although bariatric surgery can cure obesity-related diabetes, it doesn't work for everyone. The longer people have had type 2 diabetes, experts say, the less likely they are to see it resolve after surgery. And not everyone loses dramatic amounts of weight. "It's still possible to 'eat through' a gastric band or a bypass," says Nusbaum. "If people go on consuming high-calorie foods and snacking all the time, they'll stay fat."

Next: Life after weight-loss surgery. >> 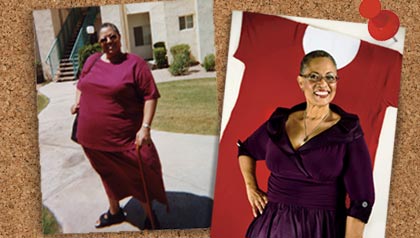 After bariatric surgery to combat obesity, Joyce Lewis stands in front of the outfit she wore in her "before" picture.

"Bariatric surgery is really just a tool," says Campos. "People still have to change the way they eat and the way they live." Because surgery drastically limits the size of the stomach and in some cases interferes with absorption, it's crucial for people to choose nutritious foods. Most bariatric programs require patients to receive diet and physical activity counseling before the operation. Many work with patients afterward to monitor their progress.

To date, more than 1 million people in the United States have undergone bariatric surgery. But experts still debate whether surgery to alter the digestive tract is a rational solution to the growing epidemic of obesity around the world.

Medicare covers bariatric surgery for those who qualify, but many private insurers balk at the cost — as much as $35,000.

For more information, including surgeons and hospitals designated as "Centers of Excellence" in performing the procedures, go to the American Society of Metabolic & Bariatric Surgery at asmbs.org.

"When I put on my public health hat, I have to admit that it seems crazy," says Flum. "But I'm a clinician. I treat patients who have tried everything else, who have type 2 diabetes and other complications of obesity, and they're desperate. This is the only thing we can offer that allows for a cure."

Still, living with a gastric band or a bypass isn't easy. "You really have to make an effort," says Julie Hartje. At first she could eat only very small amounts of pureed foods. Recently she's begun to introduce string cheese, scrambled eggs, cottage cheese and small pieces of vegetables to her diet.

Solid food has to be carefully chewed or she can't keep it down. To get enough protein, she drinks two protein shakes a day. Like most bariatric surgery patients, she's also on a regimen of vitamin and mineral supplements to avoid deficiencies. But even some pills are too large to digest, so she has to take them in liquid form.

Alcohol, carbonated drinks and caffeinated beverages are all banned. For the first six months after surgery, she carefully avoided drinking any liquids for a half-hour before and after eating, to make sure that her digestive tract could absorb nutrients from solid food. She now has to wait for two hours after a meal to drink water or other liquid. "That's been hard for me," she says.

But she's lost 60 pounds, far more than she's ever lost by dieting. Before the operation, she had to give herself seven shots of insulin a day — 400 units in all — to control her blood sugar levels. She's down to just two shots of 10 units each a day. Eventually, she hopes, her diabetes may go away completely.

"For me, I have to say, it's been nothing short of miraculous," Hartje says.

Peter Jaret is a freelance writer living in Petaluma, Calif.