En español l Something as simple as taking a brisk half-hour walk  outdoors three times a week can significantly boost stroke survivors' physical fitness and improve their ability to get around — all within just a few months, new research shows.

Better still, these gains could translate into a reduced risk of illness whileimproving overall quality of life, says Carron D. Gordon, lead author of a study published this month in Stroke, a journal of the American Heart Association. 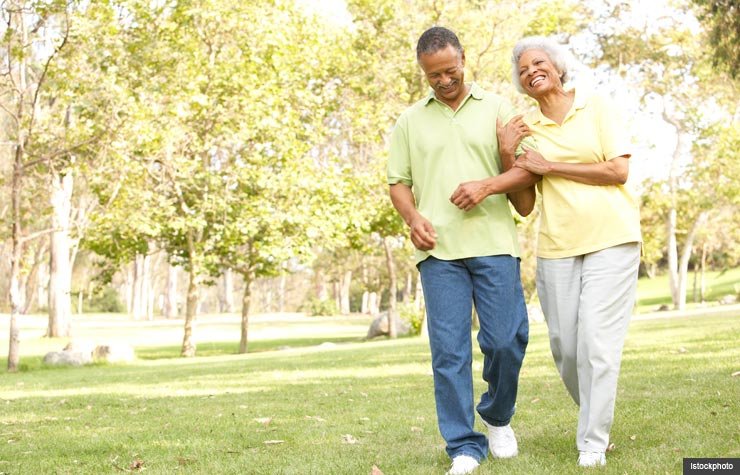 The study was conducted among 128 stroke survivors in Jamaica, where Gordon is a lecturer in the school of physical therapy at the University of the West Indies. People who return home after undergoing rehab for a stroke "spend most of their time doing very little," she says. They often withdraw from everyday activities, because they lack energy and are worried about falling. "I was interested in what could be done for them," Gordon says.

The study enrolled people who had previously suffered a stroke between six months and two years before the study. They ranged in age from 42 to 90 (their average age was 64), and were randomly divided into two groups. One group received therapeutic massage to their affected limbs for 25 minutes, three times a week for 12 weeks.

A second group walked outside three times a week for 12 weeks. They started out with 15-minute walks, gradually increasing to 30 minutes, keeping their activity level at 60 to 85 percent of their maximum heart rate. They were supervised by instructors and could be accompanied by a friend or relative if they wished.

"They walked in any convenient place in their community," Gordon says. "This could have been around their home, on a sidewalk or in the park."

After three months, the groups were compared, and the members of the exercise group walked faster than the massage group, covering 290 meters (more than three football fields) in a standard six-minute walking test. That was 174 feet farther than those who had only received massage.

Their resting heart rate, a key measure of cardiovascular health, improved as well. Those who walked for exercise averaged 78 beats per minute, versus 84 beats per minute for the other group.

While the exercisers did not improve in performing basic activities, such as dressing themselves, they reported that their quality of life improved, as did their physical fitness and endurance. "The fact that there was improvement in their physical capacity and endurance would certainly be meaningful to any elderly person with a stroke," Gordon says.

Cheryl D. Bushnell, M.D., a neurologist who specializes in treating stroke patients at the Wake Forest Baptist Medical Center, hailed the study for demonstrating the benefits of an everyday activity like walking.

"We just don't emphasize exercise enough, in my opinion," she says. "This is nice evidence-based proof that exercise does more than just improve your quality of life. It affects metrics that could affect your longevity, such as walking speed."

Bushnell found it noteworthy that the exercisers in Gordon's study benefited from walking just three days a week, pointing out that the American Heart Association recommends 30 minutes of exercise a day, five days a week.

Gordon's study is the first to examine walking by itself (others have tested a combination of aerobic and muscle-strengthening programs). She next wants to see whether walking affects blood pressure, blood sugar levels and lipid levels, or prevents stroke recurrence.

"I really think walking is a great exercise for all of us," Gordon says.

Michael Haederle is a freelance health writer and frequent contributor to AARP.