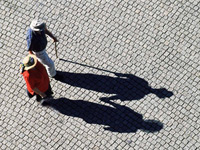 En español | Dodging dementia may be as simple as slipping on a pair of walking shoes and heading out the door. A study from the University of Pittsburgh found that walking about six miles a week seems to protect against brain shrinkage, which in turn may slow the progress of cognitive decline.

Brain size typically shrinks in late adulthood and often heralds the onset of dementia. Earlier studies suggest that physical activity protects against the deterioration of brain tissue, but no long-term studies have been carried out to test that theory. These researchers set out to do just that.

At the start of the study, they asked 299 healthy, dementia-free men and women, average age 78, to keep track of the number of blocks they walked in a week.

After nine years, the researchers measured the brain size of the participants using high-resolution brain scans. It turned out that the men and women who walked more at the beginning of the study had more gray matter. Those who logged approximately six to nine miles a week fared best, even after taking into account variables such as age, sex, body mass index and education. Walking more than that didn't provide extra benefits.

Four years later, testing showed that nearly 40 percent of the group had developed dementia or cognitive impairment, that is, problems with memory, language or concentration. After comparing the brain scans with walking patterns and cognitive function, the researchers found that the people who walked the most retained the most gray matter and cut their risk of developing memory and thinking problems in half.

"This research is unique in that we examined the brain itself rather than depending on what people tell us," says epidemiologist Lewis Kuller, M.D., one of the study's authors. "Looking at the relationship between brain changes and walking suggests that walking may be beneficial — and walking is the most common physical activity of older people." Although the study doesn't prove that walking prevents loss of brain function, it does suggest that people who walk do better down the road.

"Based on current evidence, physical activity stands as one of the best ways to lower the risk of dementia," says neurologist Daniel Kaufer, M.D., of the University of North Carolina-Chapel Hill, adding that this study shows the long-term benefits.

"It connects the dots between being more physically active at the start of the study to having a bigger brain nine years later," and shows that subjects who walked the most halved the risk of memory problems 13 years after the study began, continues Kaufer, who was not involved in the study.

A study published in August in the journal Circulation might help explain why: Researchers in that study found that people whose hearts pumped more blood had less brain shrinkage as they aged. It may be that increased blood flow to the brain helps keep it healthy by providing nutrients and removing toxic waste products.

Kaufer's bottom line? "Walking a mile a day helps keep dementia at bay — but it's no guarantee."

The study appeared online in the Oct. 13 issue of the journal Neurology.