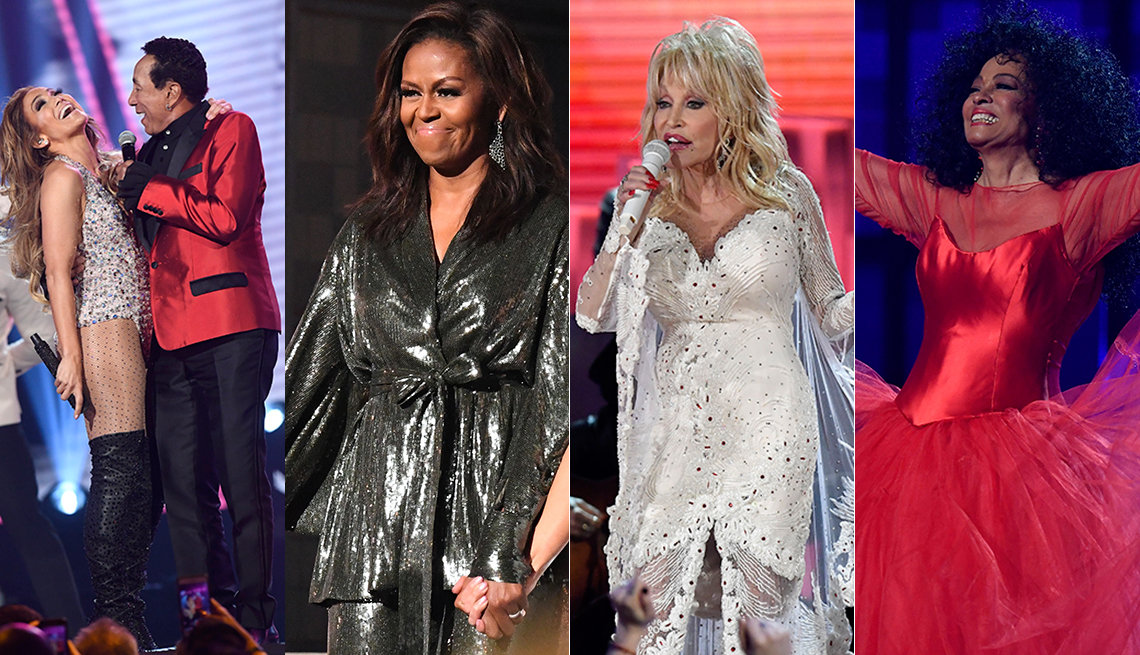 In a 2019 Grammy Awards show heavy on lavish production numbers and complete with fireworks and the usual parade of young musicians, four moments stood out for viewers over 50.

First, the most surprising star turn: former first lady Michelle Obama. She appeared — as glamorous as any of the music stars — at the opening of the show with Lady Gaga, Jada Pinkett Smith, Jennifer Lopez and host Alicia Keys. In that company, it's no wonder the audience at first seemed unsure of who she was. But once Obama spoke, it was clear they got it. 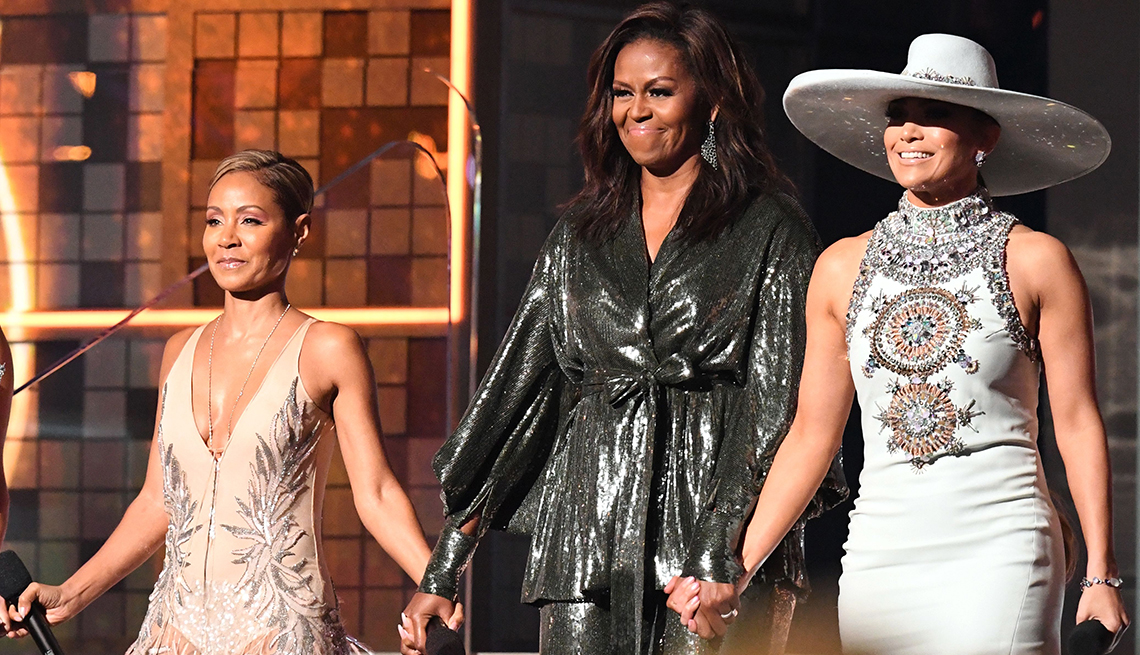 “From the Motown records I wore out on the South Side, to [Beyoncé’s] ‘Run the World’ song that fueled me through this last decade, music has always helped me tell my story,” she told a cheering crowd. Obama was quite a “get” for music's big night, but she does have a connection. Obama’s former chief of staff, Tina Tchen, 63, now chairs the diversity task force of the Recording Academy, which puts on the Grammys. 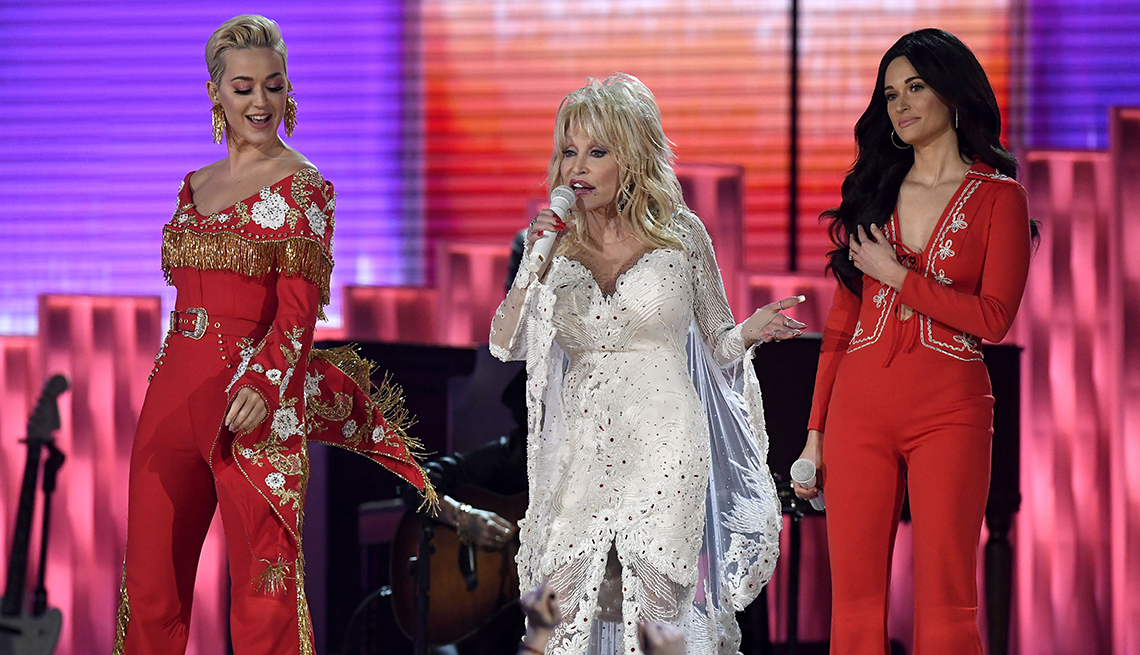 Dolly Parton was honored at the 2019 Grammy Awards via a series of duets with the likes of Katy Perry (left) and the night's biggest winner Kacey Musgraves (right).

The second big moment was a tribute to Dolly Parton, 73, who gracefully upstaged album-of-the-year winner Kacey Musgraves and a faltering Katy Perry, singing Parton's smash “Here You Come Again.” Then Parton dueted with her goddaughter Miley Cyrus on “Jolene” (which was a hit for both of them) and sang Neil Young’s “After the Gold Rush” with Cyrus and Maren Morris — not quite matching her classic 1999 version with Linda Ronstadt and Emmylou Harris — which was followed by an excellent performance with Little Big Town of her new tune, “Red Shoes,” from the film Dumplin’  and an all-star finale of “9 to 5,” the title tune of her 1980 hit film (which she’s remaking with Jane Fonda, 81, and Lily Tomlin, 79). 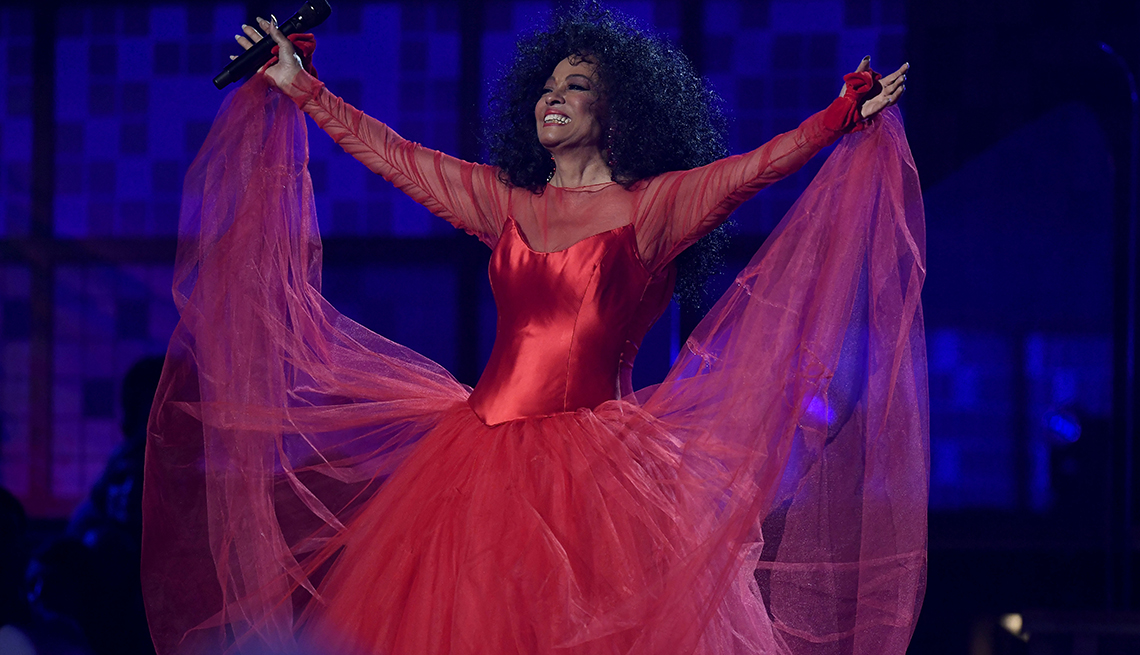 Diana Ross got a headstart on her upcoming 75th birthday with an electric performance of her past hits.

Then came Diana Ross, celebrating her 75th birthday six weeks ahead of schedule. “Happy birthday to me!” she declared. On her real birthday, March 26, she’ll rerelease her 1983 film Diana Ross Live in Central Park. Though her entrance in a voluminous scarlet satin and tulle gown was characteristically dramatic, she was quite upstaged by her inordinately adorable grandson Raif-Henok Kendrick, 9, who teasingly rebuked Alicia Keys for calling him a “distinguished little guy” — “I’m almost 4-foot-9!” — and said, “Ladies and gentlemen, please welcome my grandmommy, Diana Ross!”

Ross sang her schmaltziest hits “Reach Out and Touch” and “The Best Years of My Life,” and urged the audience, “Learn, dream, unlock new doors!” Some grumbled that Ross, with 70-plus hits, ought to have earned more respect from the Recording Academy, which has given her zero Grammys except a 2012 lifetime achievement award. But her early-birthday Grammys performance touched many at the show, including her actress daughter Tracee Ellis Ross and Motown founder Berry Gordy. And she looked spectacularly unlike many people’s idea of a grandmommy. 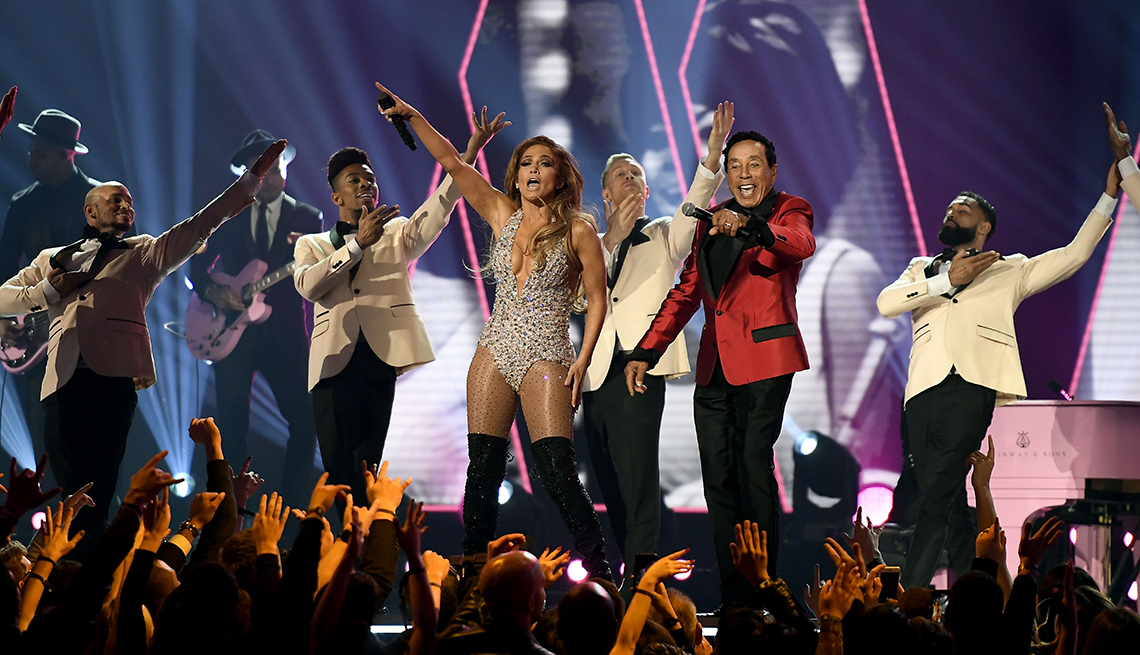 Jennifer Lopez and Smokey Robinson helped pay tribute to Motown's 60th anniversary with a medley of the label's biggest hits.

The final top moment for older viewers was when Smokey Robinson, 78, sang in a tribute to Motown, which he cofounded with Gordy 60 years ago. He dueted with host Alicia Keys on “The Tracks of My Tears,” one of his 26 Top 40 hits. “People say I’m the life of the party,” he sang, and for many at the Grammys, he was. He also dueted with Jennifer Lopez on his song “My Girl,” changing the lyrics to “My Jen.” When Lopez was criticized as the Grammys choice for the main performer in the Motown tribute because she’s Puerto Rican, not black, Robinson (who has green eyes, thanks to his French great-grandmother) said, “Anyone who is upset is stupid.” Lopez certainly gave drama to Motown hits from “ABC” to “War,” executing dance moves and backward flips off the piano that one doesn’t often see from a singer who's about to turn 50 (in July).

“Motown was music for everybody,” Robinson said. Then he got ready to host another, even bigger star-studded tribute show, Motown 60: A Grammy Celebration, that's being filmed two days after the Grammys and airing on CBS at 8 p.m. ET on April 21.