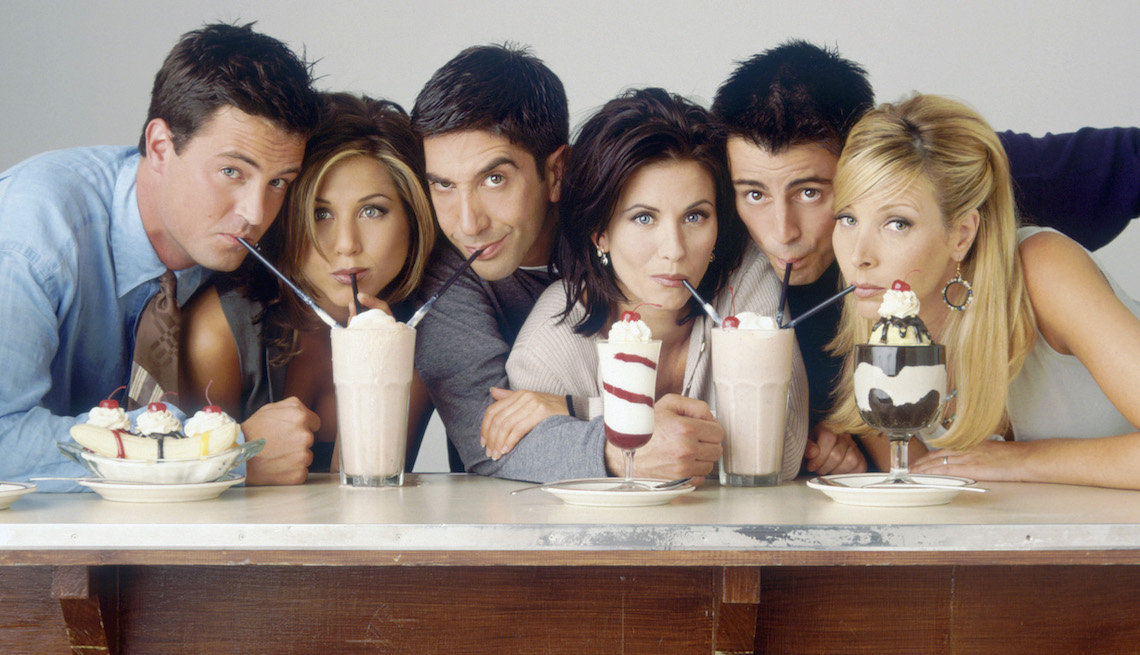 En español |  Friends, still the second-most popular show on Netflix a quarter-century after its debut on NBC, now has an all-AARP-age cast: Its youngest actor, Matthew Perry, turns 50 on Aug. 19. He was just 25 when he made TV history in 1994 with now-50-year-old Jennifer Aniston, Matt LeBlanc, 52, David Schwimmer, 52, Lisa Kudrow, 56, and Courteney Cox, 55, who played Perry's wife (though she was really married to David Arquette).

It's estimated that just over a twenty-fifth of everything watched on Netflix is an episode of Friends. It's so perdurably beloved that HBO Max paid a reported $425 million to wrest it from Netflix and help launch its forthcoming streaming service in 2020.

Fans will likely turn out on Sept. 23, Sept. 28 and Oct. 2, when 12 classic episodes (plus cast interviews and never-before-seen scenes) will be screened at over 1,000 U.S. theaters for Friends 25th: The One With the Anniversary, including 1997's “The One With Chandler in a Box” — in which Perry's character, Chandler, spends six hours in a wooden packing crate in penance for smooching the girlfriend of his roommate Joey (LeBlanc).

Nobody in the cast is living in a packing crate these days. As of 2015, each actor was reportedly still earning $20 million a year in residuals for Friends. Here's how each one is doing now:

Chandler (Matthew Perry): After the hit show went off the air, Perry earned a Golden Globe nomination and three Emmy nominations for The West Wing and The Ron Clark Story — he only got one Emmy nom for Friends — as well as played Ted Kennedy on The Kennedys After Camelot and the excellent bad guy Mike Kresteva on The Good Fight and The Good Wife.

Monica (Courteney Cox): She missed out on starring in Desperate Housewives — her real-life pregnancy gave Teri Hatcher that role — but she had a post-Friends hit with Cougar Town, about the hunt for love among people pushing 50. Her net worth is estimated at $120 million versus Perry's $80 million.

Phoebe (Lisa Kudrow): Still close friends in real life with Cox and Aniston, Kudrow starred in superb movies (Easy A, Booksmart) and earned an Emmy nomination for Web Therapy, on which all the Friends but Aniston guest-starred. Success has helped her come to terms with aging. As a guest on his podcast, she told host Marc Maron, “I end up with, ‘So what? So, all right. You're older. That's a good thing. Why is that a bad thing?’ “

Ross (David Schwimmer): He will costar with Meryl Streep and Gary Oldman in Steve Soderbergh's Panama Papers drama The Laundromat this fall, currently plays Debra Messing's love interest on Will & Grace, and received an Emmy nomination in 2016 for playing Robert Kardashian in The People v. O.J. Simpson.

Joey (Matt LeBlanc): His Friends spin-off Joey tanked, but his 2011-2017 show Episodes won him his first Golden Globe Award, plus more Emmy nominations than Friends did.

Rachel (Jennifer Aniston): The most successful Friend is Aniston, reportedly worth $220 million, who recently acted in and produced Netflix's hit Dumplin'. She also stars in the forthcoming fall series The Morning Show, with Steve Carell and Reese Witherspoon, which anchors Apple's attempt to crush Netflix with its own new streaming service.