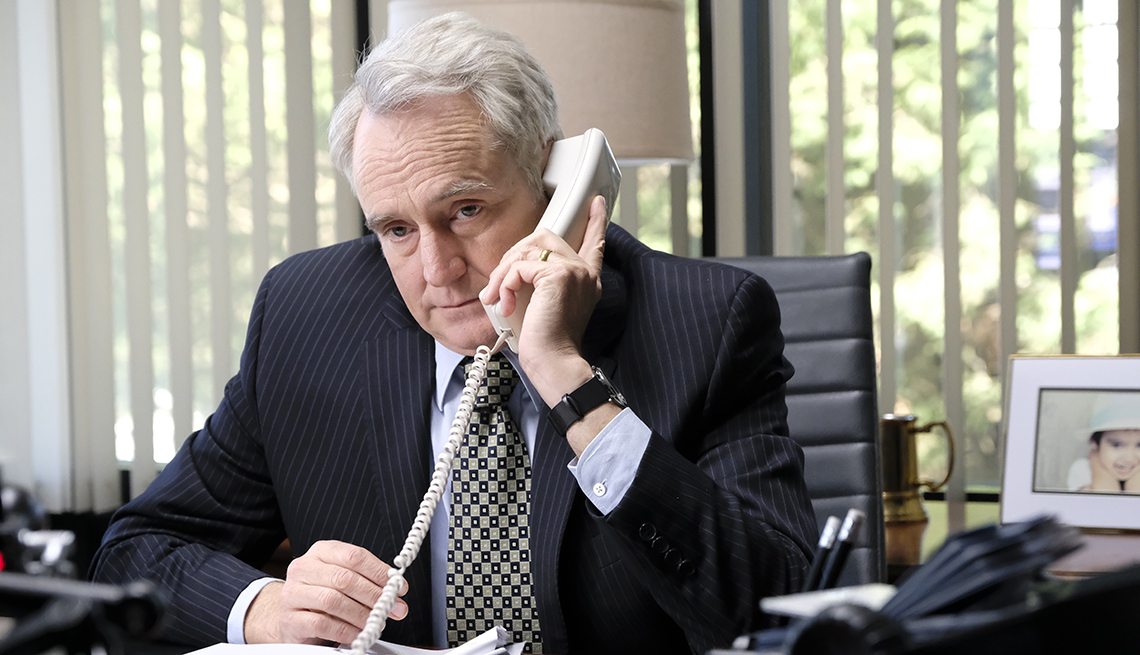 Bradley Whitford, 59, known for his Emmy-winning role on The West Wing, has "shocking" white hair these days to go along with his white-hot career. With choice roles in such critical darlings as last year's The Post and Get Out and a delicious turn as a bad guy in Nicole Kidman's new drama Destroyer, he will now be seen in National Geographic's six-episode docudrama Valley of the Boom as Netscape CEO James Barksdale. The series centers on Silicon Valley's dot-com boom and bust, so we couldn't help but ask about technology, The West Wing and more.

1. Valley of the Boom is set in the dot-com gold rush circa 2001 — right at the time The West Wing was a hit. Can you believe technology has changed our lives so much in that short time?

It rearranged the way our neurons fire. The digital world is fiercely addictive, right? We don’t have any antibodies for this. We’re like islanders when a colonist shows up. We have no capacity to deal with this. But I had a grandmother born in the 1880s, and she used to weep about telephones because nobody wrote letters anymore. So it’s all relative. We have to adjust to this, and I guarantee you when the first printing press went into operation, a bunch of monks showed up and said, “I just memorized an entire book! What are you doing?”

2. And speaking of change, how about your full head of white hair?

It’s kind of shocking. My insight on aging is that there are no segues. It feels like one day you’re a young guy starting out in show biz, and the next day you’re Wilford Brimley, you’re a grizzled industry veteran. I had been in situations on television shows where they want you to dye your hair, and I hated that. I was very relieved to put down my foot and say, “This is where I am.”

3. White hair didn’t keep you from being cast in Nicole Kidman’s new crime film Destroyer. So do you still feel relevant?

You never know what’s coming next. I feel just truly blessed. Honestly, something that really helped me transition into an older version of myself to the public was Get Out [the $4.5 million indie hit that made $255 million]. That movie was a very, very lucky sort of way to transition.

4. You’re a frequent guest on The West Wing Weekly, a podcast for fans hosted by your former castmate Joshua Malina and composer Hrishikesh Hirway. Is that a nostalgia trip for you?

Here’s an amazing thing. I would bet that the majority of people who watched The West Wing did not watch it in its first run. I’m glad we didn’t know people would be picking this apart 25 years later, because it would have been scary. We’re a very tight group. We all went through an incredible creative cultural experience, and the farther we get away from it, the luckier we realize we all were. It was a show about politics that was not cynical. That is, to me, the legacy of the show and something I really believe in. It’s easy to make fun of politics, but politics is the way you create your moral vision and Aaron [writer-producer Aaron Sorkin] is a very noncynical, patriotic guy. I think we all are, even though as individuals we are dark and cynical people. I am very proud to be part of it. It’s fun to go back.

And now, are you going to ask me if there’s going to be a reboot?

5. I wasn’t. But there have been reports. Is there going to be a reboot?

I have no idea. But apparently, [West Wing actor] Richard Schiff is talking about it.