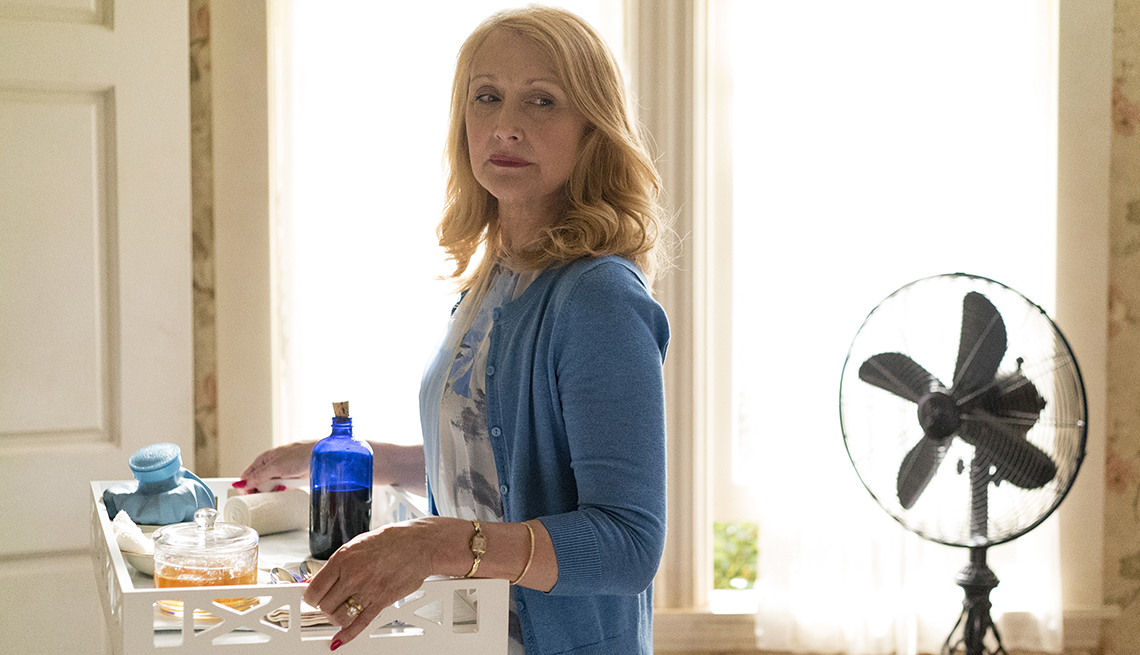 Patricia Clarkson plays a domineering mother in the new HBO miniseries "Sharp Objects," based on the novel by Gillian Flynn.

Few actresses have taken a classier, riskier, slower route to success than slyly subversive Patricia Clarkson, 58, who disdained mainstream roles (and TV) for decades, earned cachet in prestige roles (an Oscar nomination for Pieces of April, two Emmys for Six Feet Under, a Tony nomination for The Elephant Man), and scored the most interesting part of her life as Adora, Amy Adams' ultra cultivated, smothering mother in HBO’s new eight-part miniseries Sharp Objects. "I told Amy [that] Adora is the most perfect woman I've ever played," says Clarkson in a purring voice that carries traces of her New Orleans youth and Yale School of Drama polish. "Perfect hair, perfect nails, and a raging river of emotion lurking beneath. When you see the last episode, you’ll say, 'Oh my God, I talked to that scary woman on the phone!'"

Adams plays an alcoholic, mom-traumatized reporter investigating young girls' deaths in her hometown, Wind Gap, Mo., where Adora runs a hog-butchering empire, rules the social set with an iron fist, and regards her daughters as possessions. "There’s a lyrical quality to her, a dichotomy, a manipulativeness that I've never gotten to play before," says Clarkson. "It's all about keeping people close, not letting them go."

Wind Gap is like her personal dollhouse, with her daughters as her favorite dolls. "Would I like to play a superhero in a unitard? Sure, but I'm happy to play complicated, surprising characters that are essential to the story, not the dumb roles that put women of a certain age in secondary roles. Now I can pick and choose."

"Adora is the most perfect woman I've ever played: Perfect hair, perfect nails, and a raging river of emotion lurking beneath."

Clarkson, whose proposed rallying cry for Hollywood women is "more pay, more say, no lay," refuses to sell out in ways some actresses feel they must. "There are certain parts I won't play: sadly cheesy love objects or just mothers, the archetypal horrible boss that has absolutely no texture, no voice, or asexual characters. I won’t play women that I feel degrade women at a certain age. Because we actually have more to offer than we ever had in our 20s and 30s and 40s. People are finally realizing that women in their 40s, 50s, 60s can sell tickets. People want to see us, people want to see us thrive. They want to see us complicated and not perfect. We can make you money!"

Clarkson's profile has never been higher, and she's still gloating over the unprecedented emotional depths she gets to plumb in Sharp Objects. Adora is like a set of Russian nesting dolls, a persona concealing a persona. "She's an actor, really. It's Patricia playing Adora, but Adora playing a role, and that was quite a feat I had to maintain." In a distinguished career often relegated to secondary parts, like many actresses over 25, she’s never had a central confrontation like the one she has with Amy Adams in this one. "The soon-to-be-infamous bathtub scene that Amy and I endured took both of us to the edge of our sanity," she says with a low chuckle, "but we’re resilient. We had a hug and a glass of wine and a laugh at the end of the day."

Clarkson's day is nowhere near its end: As a high-IQ power-monger on Netflix’s House of Cards, she challenged Kevin Spacey's character as an equal, and she'll be there next season when Robin Wright seizes control of the show. She’s getting bigger roles, like a homicide detective in the forthcoming thriller film Out of the Blue, loosely based on Martin Amis' novel Night Train. "We should be working more as we age," Clarkson says. "Women working into their 80s and 90s should be the norm. It's exactly how our business was meant to be. An actress should never retire. Never!"