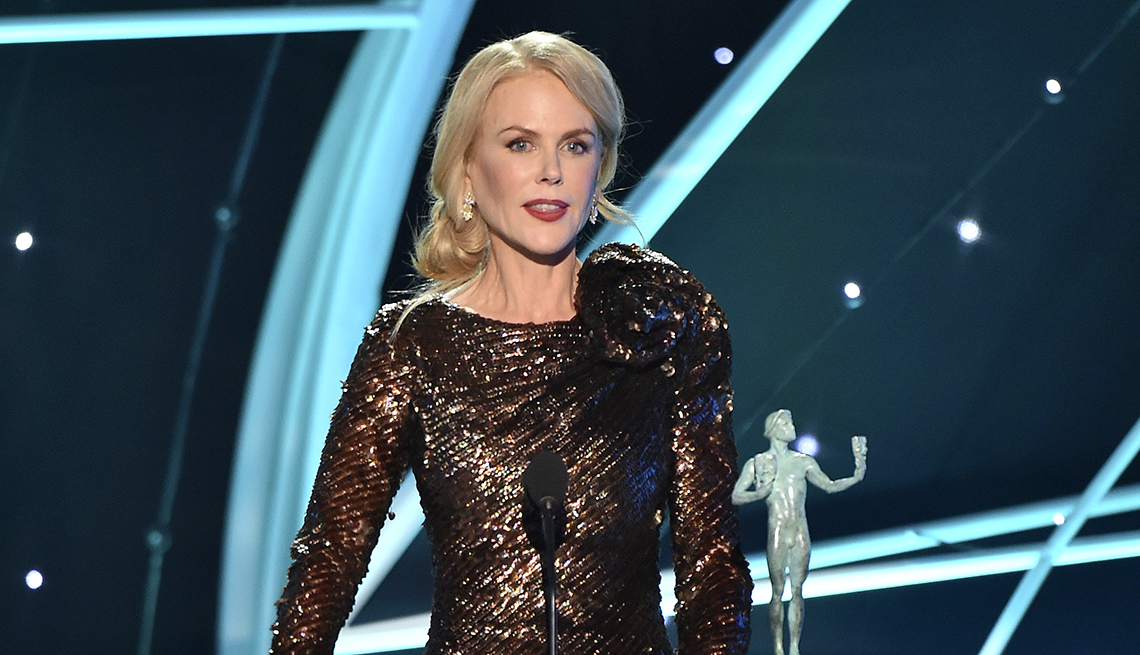 Nicole Kidman accepts the award for outstanding performance by a female actor in a television movie or limited series for her role in "Big Little Lies."

The evening belonged to Kidman, who previously had won the Emmy, Golden Globe and Critics' Choice awards for playing an abused wife in the HBO TV hit Big Little Lies, and she devoted her acceptance speech to celebrating and advocating mature actresses in an industry that regards them as “washed up.” After winning the award for outstanding performance by a female actor in a television movie or limited series for her role, Kidman — who noted she had the flu — exclaimed, “Oh, wow! Yikes! I'm crying,” then hailed the other nominees: Laura Dern, Susan Sarandon, Jessica Lange and Reese Witherspoon. “There are others — Meryl Streep, Jane Fonda, Judy Davis, Shirley MacLaine, Judi Dench — I want to thank you all for your trailblazing performances you have given over your careers and how wonderful it is that our careers today can go beyond 40 years old," she said.

"Twenty years ago, we were pretty washed up by this stage in our lives, so that's not the case now. We have proven, and these actresses and so many more are proving, that we are potent and powerful and viable. I just beg that the industry stays behind us because our stories are finally being told.”

Actually, begging doesn’t work in Hollywood, and it won’t be necessary, because actors over age 50 are getting more bankable. Six of the 10 SAG actor races were dominated by grownup talent, and each of them made a bundle for those studios that overcame instinctive ageism and hired them.

More work needs to be done in educating the industry to use its 50-plus talents — especially women — instead of discarding them. As Kidman told the crowd, “It's only the beginning.”