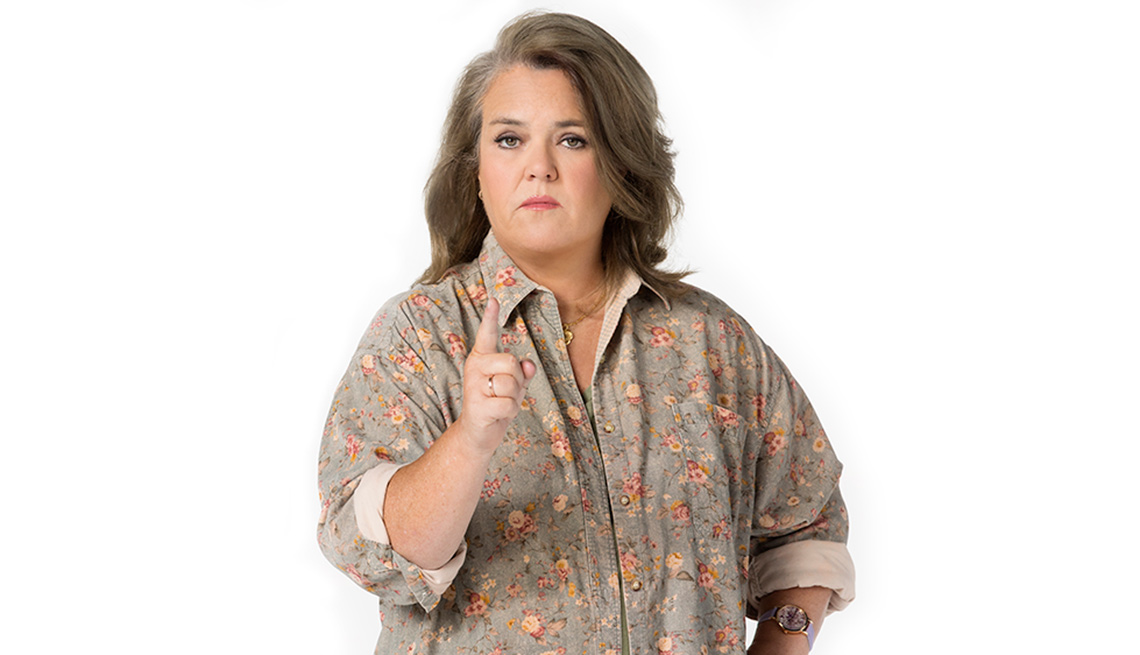 Rosie O'Donnell waited until age 55 to take her first regular series role, as Tutu, a messed-up grandmother on SMILF. Actress-director-writer Frankie Shaw (Mr. Robot, Stronger) created this semiautobiographical TV show about a single mom that is adapted from her Sundance Film Festival award-winning short film. The series premieres Nov. 5 on Showtime. O'Donnell tells AARP that, like Showtime's hit Shameless, the show feels authentic to her experience.

Why did you wait until SMILF to become a series TV star?

I have five children ages 4 1/2 to 22 and couldn't go to L.A. for a show. And there wasn't a role that spoke to me. As a young actress, I knew that as I got into my 60s, I'd be able to do the Geraldine Page roles, like The Trip to Bountiful — the kind of Irish standard character I always knew that was in my future. So when this role came up, I thought, Here we go! I was stunned by Frankie's unique voice, the birth of a major artistic voice in our culture. The reality of an Irish Catholic working-class family — struggling with poverty and mental illness and all that comes with it — is accurately portrayed in this beautiful show. It's a woman-oriented, woman-powered series about a mother and daughter and how their lives mix and don't. It's like a feminist manifesto. Frankie grew up with a feminism that never existed when I was a kid, and it empowers her to write truthfully and expose the gritty underbelly of life with compassion, and not with disdain or self-loathing.

What will Rosie fans see that's new in you?

Tutu suffered in a family where emotions were never discussed and people often took to the bottle, rather than address their feelings. There's a stoic madness, and my character is mentally compromised, with either borderline personality disorder or severe untreated bipolar disorder. [O'Donnell has been public about her own different struggle with major depressive disorder and post-traumatic stress disorder.] We explore the reality of her loving her child [Shaw] more than anything and yet not being able to be civil to her or maintain a relationship. It's very honest, and I felt I could bring a lot to it by dying my hair gray and letting the gray grow out and having no makeup — being as authentic as I can be.

Do fans recognize you with that look?

People don't notice me with gray hair. They go, "Are you Rosie O'Donnell?" I say 'Yes.' "No, you're not." I say, 'I swear to God I am.' "Oh, my God! You sound like you." The freedom of a 55-year-old woman is to show herself in this invisibility cloak that people think is really horrific and dehumanizing. But for me, it's provided a freedom that I haven't had in a couple decades. My teenagers were not so happy about my gray hair and looking like a grandma. Embarrassing for my 14-year-old. Horrible for her.

Your kids must suffer for your art!

My kids are suffering more than me. For me, it's the beginning of what I hope to be my second-chapter acting career.

I was a Connie Britton fan from Friday Night Lights (produced by Showtime's CEO David Nevins) and Nashville, but I never would've known how freakin' funny she is. We have this scene where she's had plastic surgery and I see if she's all right. And we did this whole improv of her being high on Vicodin and out of it.

Shades of the classic comedic Quaalude scenes of Leo Di Caprio in The Wolf of Wall Street and Albert Brooks in Modern Romance.

I was like, Connie Britton! Who the hell knew you were so goddamn funny? She gets the majority of the laughs in this series.

And you get some tears. Showtime is more hospitable to tough comic/dramatic material than broadcast networks, as in Shameless.

Shameless is one of the best shows on TV, an epically beautiful tale of deprivation, mental illness and addiction. My brother Eddie, the oldest in our family, said, "You gotta watch this new show!" I did and said, 'Eddie, that's our childhood! No mother, a father incompetent to deal with being a widower with five kids — and you're Emmy Rossum, the oldest one trying to keep everyone together.'

Do you worry about SMILF finding the kind of mass audience you're used to?

The benefit of Showtime and any subscription network is that it's not based on ratings. They don't let anyone see the ratings. They bring all this content in like a museum, and you pay to get into the room and choose what you like. So you don't have the pressure you're under on broadcast network TV or basic cable. Showtime believes people will pay attention to Frankie's talent. She's a heroic feminist icon. This young, beautiful, sexy, intelligent, artistic, creative woman is someone that everyone needs to know. This is her debut, and she's only got the stratosphere after that.

I'll be watching. And you've inspired me never to dye my hair.

Good for you! You'll feel freedom.