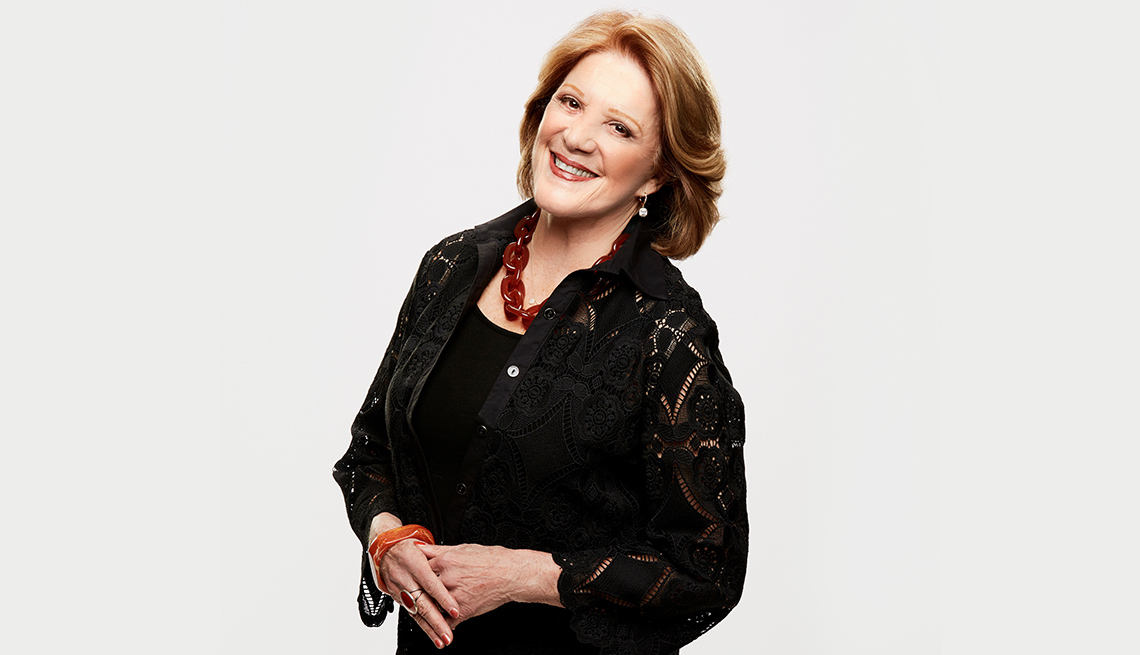 Linda Lavin isn't slowing down as she gets ready to turn 80 on Oct. 15.

Linda Lavin, 79, really seems to mean it when she calls her new CBS sitcom 9JKL, which premieres Oct. 2, “funny and smart.”

“We all say this stuff when we’re plugging a series,” says Lavin, a Broadway star most famous for her title role on Alice, another CBS sitcom. “But this is a real collaboration between highly talented and skilled people who had one goal in mind — and that was to make a great show.”

She plays Judy Roberts, the mother of two adult sons. The show's focus is the newly divorced Josh (Royal Pains' Mark Feuerstein, 46), who has moved into a New York City apartment that’s sandwiched between those of his parents and married brother, Andrew (David Walton, 38). And yes, they are in apartments 9J, 9K and 9L.

Surprise: Boundary issues abound. Judy — whose husband, Harry, is played by Elliott Gould, 79 — is focused mainly on poking her nose into her son’s business, romantic and otherwise, and making wildly inappropriate comments. (“We used to be one body,” she says to Josh in the pilot.) 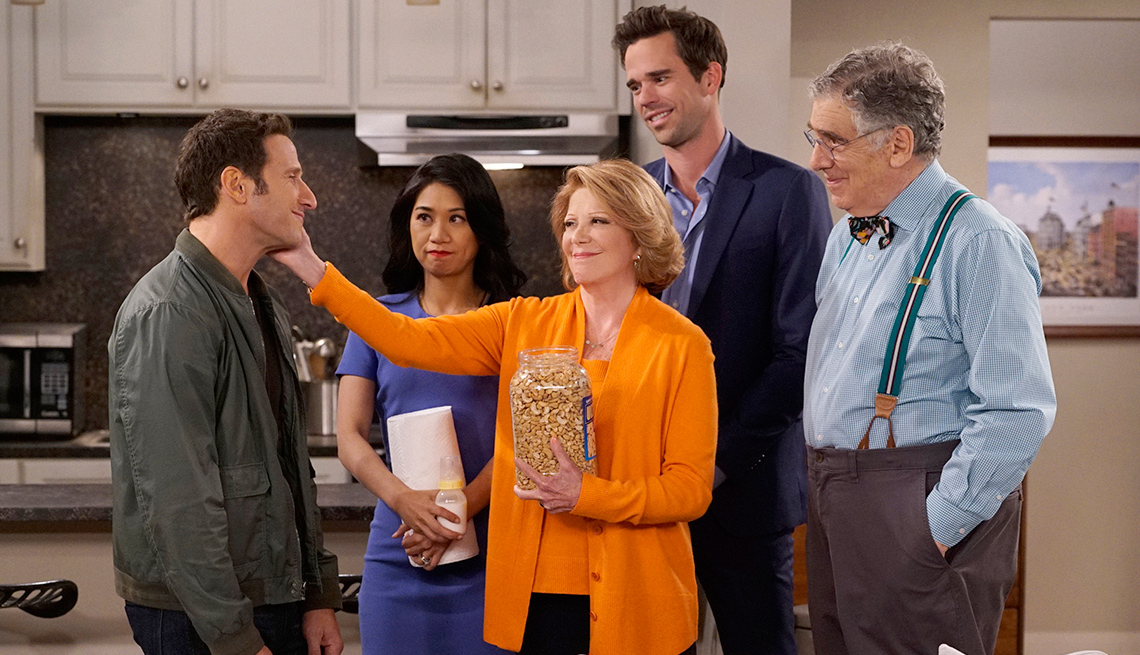 "9JKL" stars Mark Feuerstein (left) in a family comedy inspired by his real life. His character, Josh Roberts, lives in a New York apartment sandwiched between those of his doting parents (Elliott Gould and Linda Lavin) and competitive brother (David Walton) and sister-in-law (Liza Lapira).

“She doesn’t have a very thick filter,” the actress says of her character.

Lavin, of course, will forever be known for a more substantive role: Alice Hyatt, the Mel’s Diner waitress she played from 1976 to 1985. Based on the 1974 film Alice Doesn’t Live Here Anymore, the show was centered on the trials of a single, working mom in Phoenix — with reliable laughs provided by, among others, Polly Holliday’s Flo ("Kiss my grits!”).

“I’m thrilled when people recognize me as Alice,” Lavin says when asked whether she ever gets tired of being defined by the role. “She changed my life. She politicized me, she brought me into the arena of women’s issues, financial issues, economic issues, health care issues, single mother issues, working women issues.” Lavin went to ERA marches, gave speeches on labor issues and viewed herself as a kind of role model. She also won two Golden Globes for her performance. No, she adds, “I never get tired of it.”

Lavin, who grew up in Portland, Maine, has spent much of her career onstage. She appeared on Broadway (Gypsy, The Sisters Rosensweig) in shows that have earned her six Tony nominations and a win for her role in Neil Simon’s Broadway Bound in 1987.

Twice divorced, she married her third husband, Steve Bakunas — a carpenter, artist and musician — in 2005. They settled in Wilmington, N.C., where they turned an abandoned garage into a 50-seat theater that they ran together for five years.

They now live in rural New York near the Massachusetts border and are transforming a 250-year-old barn into a B&B with five guest suites in the hamlet of Spencertown. They're thinking about calling it Country Suites and plan to hire a manager to run the place. (There will be no chatting with Lavin over your morning waffles, in other words.)

Devoted to singing for as long as she can remember (even in the crib, Lavin has said), she also has a nightclub act. Last summer she performed at Birdland in Manhattan, belting out jazz standards while telling stories “about my childhood, about my life now,” she says, with a five-piece band that includes Bakunas on drums. In 2011, she released an album of jazzy show tunes called Possibilities.

Lavin took on 9JKL at the request of Feuerstein, who cowrote the pilot with his wife, Dana Klein. Lavin and Feuerstein had grown close playing mother and son in NBC’s short-lived 1998 sitcom Conrad Bloom.

The actress, who turns 80 in October, describes her latest project experience as “really the best time I had on television in a long time.” Lavin can't imagine anything better than the life she is living: “I have everything I want, everything I’ve ever needed, right now.” 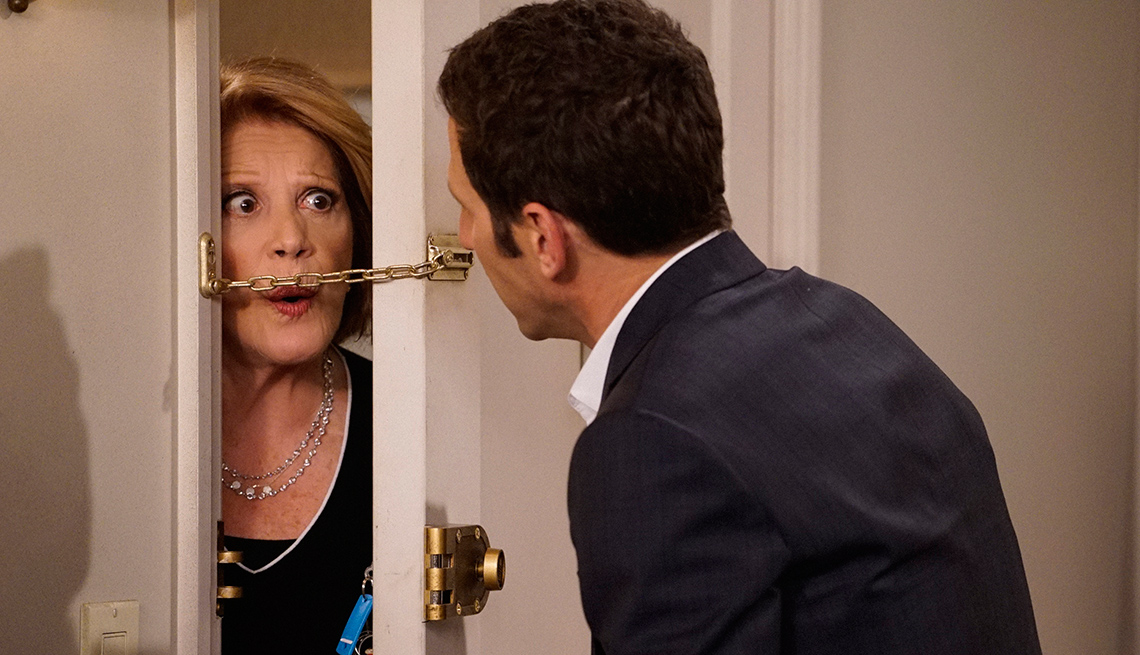 Linda Lavin and Mark Feuerstein, who plays her son, in "9JKL"