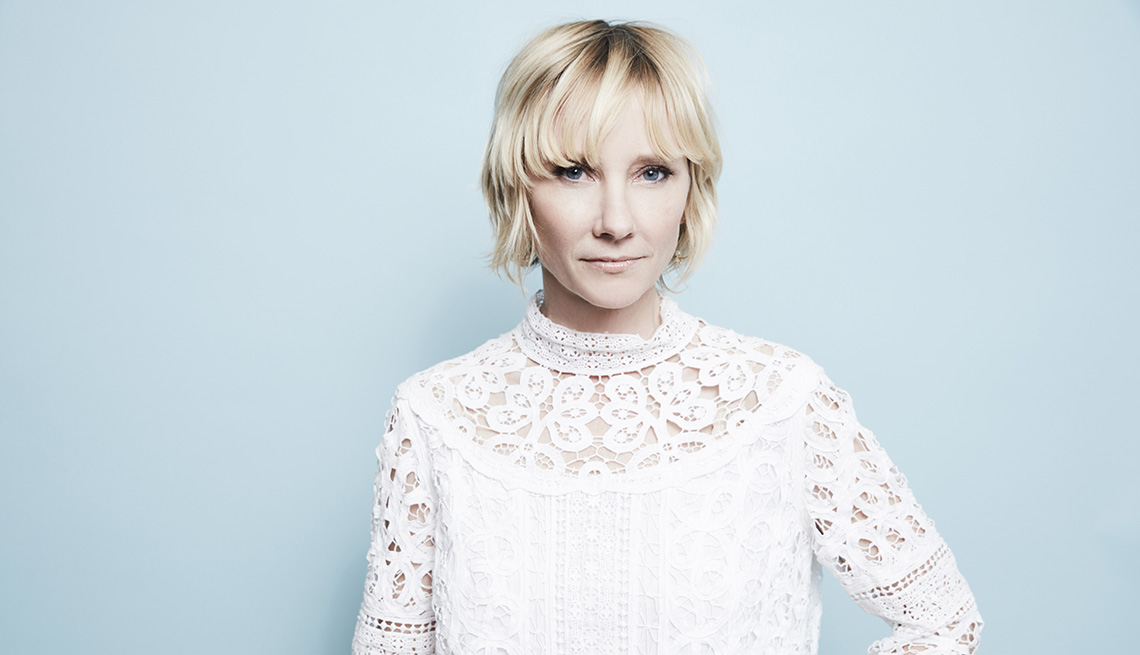 Actress Anne Heche stars as the Deputy Director of the Defense Intelligence Agency on the NBC drama series "The Brave.”

While she aces her new role as ultra-focused intelligence director Patricia Campbell on NBC’s The Brave (Mondays, 10 p.m. ET), Anne Heche readily cops to a little off-duty chaos. “You’ll have to excuse me, I’ve just been in three different time zones and my brain is a little off,” she says about a minute into our chat, after apologizing for a slight delay in tracking her down.

As for where, exactly, she is? That part’s a little unclear. It was supposed to be Chicago — where she and her two sons, Homer, 15, and Atlas, 8, are meeting up with her partner, James Tupper, as he wraps up a film. But having just arrived at a “strip mall,” somewhere outside the city, she says, “I could be anywhere! I have just been dumped into what we are calling the Marriott Oasis, which exists in every state in the country, and which we’ve been visiting a lot this summer.”

Entertainingly zany, or as she puts it, a bit of a “goofball,” Heche clearly enjoys playing with our expectations of her. (You may recall the title of her very candid 2001 memoir, Call Me Crazy.) In fact, when it comes to coordinating the complicated logistics of her life right now — as she and Tupper debut major roles on different TV programs — she appears to be directing the action with a cool head.

Keeping her boys on a normal school schedule, she says, is a major goal, but she otherwise tries to stress the value of seizing opportunities when they arise. “I tell them, 'Guys, these are good problems to have,' ” she says, describing how she and Tupper asked their sons to help them swiftly move out of their L.A. residence, which they are renting out, and set up up a kind of swing home in Albuquerque, N.M., where The Brave films. The hope, says Heche, is that the pair can tag-team parent during shows that “we hope to film simultaneously, but not at exactly the same time.”

Her new role is indeed a major opportunity for Heche, who has been steadily working in TV since her film career almost flatlined nearly two decades ago. It’s also a perfect vehicle to challenge any assumptions about her acting range. After all, wry and winsome Heche might not be the first almost-50 actress you’d imagine as the tough-as-nails deputy director of intelligence for the DIA, monitoring the bodycams and satellite feed in a just-OK suit. But on the small screen, her ability to mix vulnerability with a quiet authority draws you to her somewhat-staid character as much as to the highly trained hotties in the field. 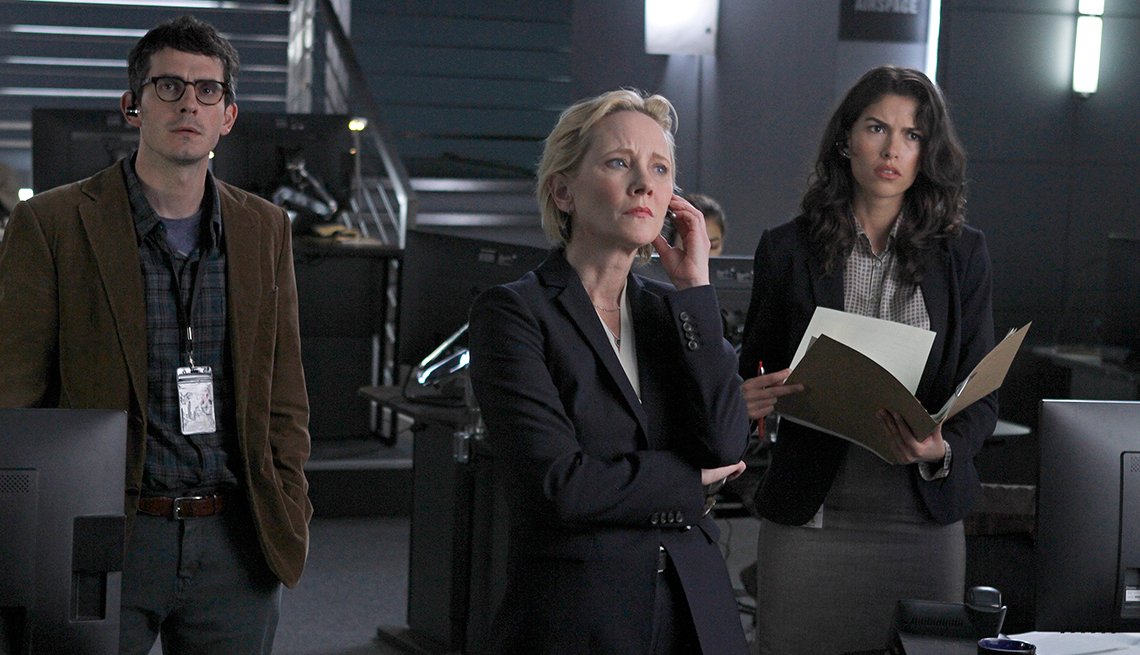 The cast of "The Brave” includes, from left to right, Tate Ellington as Noah Morgenthau, Anne Heche as Patricia Campbell and Sofia Pernas as Hannah Archer.

If the pilot doesn’t leave much to the imagination (we see a photo of Campbell’s dead son, in his battle fatigues, on her desk in the opening shot), Heche’s concentration pulls you in as the plot swiftly builds. While immediately sympathetic, her character is also a rapidly compartmentalizing master of calculation, one defined by the Solomon-like decision she faces early on: Should she keep her team focused on the original mission of saving an American doctor kidnapped in Syria, or follow a newer set of orders to sacrifice the young surgeon in order to nab a bigger terrorist target?

Cast by creator and executive producer Dean Georgaris for the “humanity” she could bring to the role, Heche seems to earnestly believe in what the show, originally called God and Country, purports to do — shine a light on the men and women carrying out a decade of war in the Middle East, often, she points out, in secret. “We’re acting, but we never for a minute forget that there are real people in the world risking their lives and making these decisions. We are really committed to honoring the people who do sacrifice their lives every day for us.” To prepare everything from the “physicality” of her HQ role to understanding how they’d actually monitor a drone, Heche and her castmates worked with a variety of ex-military and intelligence officers who serve as consultants to the show.

Otherwise, Heche believes her own life has prepared her to play tough-as-nails Campbell, a woman with, like herself, a somewhat complicated backstory. “We say on the show, arm yourself with the facts. I feel that way about my life. I’m armed with a lot of facts. I’ve lived through a lot and I’ve made a lot of mistakes,” she says. “Unfortunately, we live, we learn.”

One of five children born to Nancy and Donald Heche in Aurora, Ohio, Heche was 13 when her father, whom she has said abused her, died of AIDS. Her brother would die soon after. Cast as twins on the soap opera Another World at 19, Heche moved on to choice film roles in the late '90s, starring opposite some of Hollywood’s biggest male leads in major releases like Donnie Brasco, Six Days Seven Nights, and Wag the Dog. But it was her very public relationship with Ellen DeGeneres, and Heche’s subsequent breakdown following their 2000 split, that thrust her into the most blinding spotlight. (A nasty custody battle with ex-husband Coley Laffoon would bring later unwanted headlines.)

But if her career crashed, and then sputtered, Heche never stopped working, with credits accumulating for everything from TV movies to voiceovers for animated cartoons. Among the highlights: She earned a Tony nomination for her role in Twentieth Century on Broadway in 2004, starred in ABC’s Men in Trees (2006-08), and took on guest roles in shows like HBO’s Hung (2009-11) and NBC’s Michael J. Fox Show (2013-14). She also appeared in independent films like Cedar Rapids (2011).

Like a special ops team with a lot riding on its next move, it’s easy to root for Heche, who was discovered by an agent in a high school production, and lit out for New York despite her mother’s disapproval (the two remain estranged today.) But whether or not the role on The Brave lodges her firmly back in the firmament, Heche says she’s thrilled to be exactly where she is now, working on a show with a seriousness and relevancy that she embraces in midlife. “It’s what I want to be talking about now … and it’s a role that it took a lifetime to earn,” she says. That she also gets to play “mother hen” to her talented and multilingual castmates who happen to “look great in their workout clothes”? Just another box she can tick off on the dream job inventory. As she puts it, “Check, check and check!”