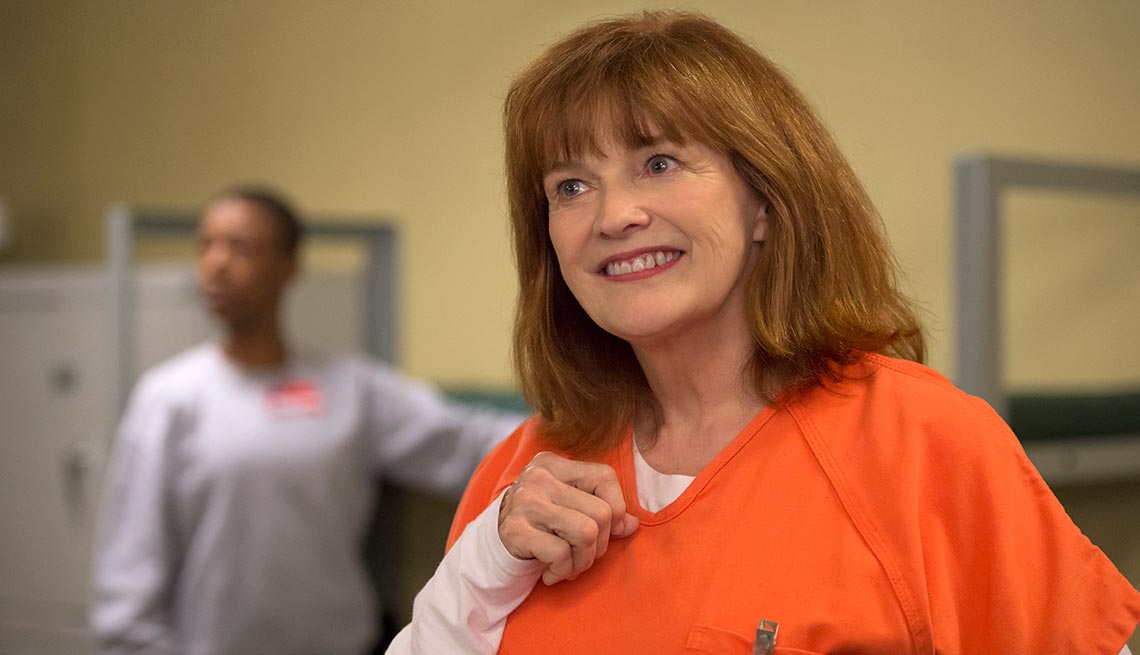 Orange Is the New Black fans are getting a richer slice of Blair Brown this season as lifestyle maven Judy King, a daytime TV personality serving time for tax evasion — and trying to ingratiate herself with fellow inmates and staff. Any resemblance to Martha Stewart is purely noncoincidental.

The role is a far cry from Molly Dodd, the 30-something Manhattan divorcée Brown made her own on The Days and Nights of Molly Dodd from 1987 to 1991.

"Judy is perfectly nice," says Brown of her Orange character. "But she's a fairly amoral person, with no loyalty to other people. Still, I like her weird practicality: She wants to get in and out as fast as she can — move past it and move on. She takes her licks. Her thinking is, 'All right. Let's do it.'"

Though Brown, 69, has never been arrested, she muses that she "might have had an incarceration issue in a past life." When she started shooting her scenes last season — Brown appeared in five episodes — Judy King had not yet been locked up. But on Brown's first day of filming for the 2016 season, she confesses, "I was actually quite nervous as I was picking up my clothes — not about acting, but because I was about to enter prison."

Some disenchantment with her supporting roles on two recent network series — Limitless and Fringe — had primed Brown to jump at the chance of being cast in Orange.

"I enjoyed my time on both series," she reflects, "but they turned out to be 'boy shows.'" In 100 episodes of Fringe, Brown notes, "we had just one female director. The show's original premise had three female characters, but they got weaker as the series went on. The business is dominated by father-and-son stories — but sons have mothers, too."

Women who didn't buy the you-can-have-it-all myth of the 1980s identified strongly with Brown's Molly Dodd, a New Yorker who was anything but self-assured. Molly bounced from job to job while dabbling in music, her open personality seeming to invite problems rather than peace into her life.

Luckily, Orange creator Jenji Kohan was a big fan of the show. "Molly Dodd is the reason I got Orange," Brown says. "It was a new form — a 'dramedy' — with no laugh track, which the network hated. Nor did Molly have a plan for her life. There was so much pressure on women back then — they were expected to be everything to all people, and to be good and happy about it — but we never made Molly a striver. We never wanted her to walk to work in a suit and sneakers, then switch to high heels."

Just as Orange has transformed the way we watch TV — you'll search a 1980s dictionary in vain for the term "binge-watching" — so have viewer sensibilities relaxed considerably since the days when network censors objected to this Molly Dodd dialogue line: "He keeps trying to get into my pants." "The alternatives the censor came up with were just foul," Brown recalls. "They were nothing that anyone would ever say, like 'He wants to slide into my knickers.' "

No such squeamishness afflicts Orange, as its devotees well know. And Brown has found solace in an odd overlap between the show that broke her out and the one that pens her in: "We shot Molly Dodd at the same place as Orange — the Kaufman Astoria Studios in Queens. Those were my happiest times. Now I get to go back to the same building, and the same experience."