'Longmire' Is Back — on a New Network 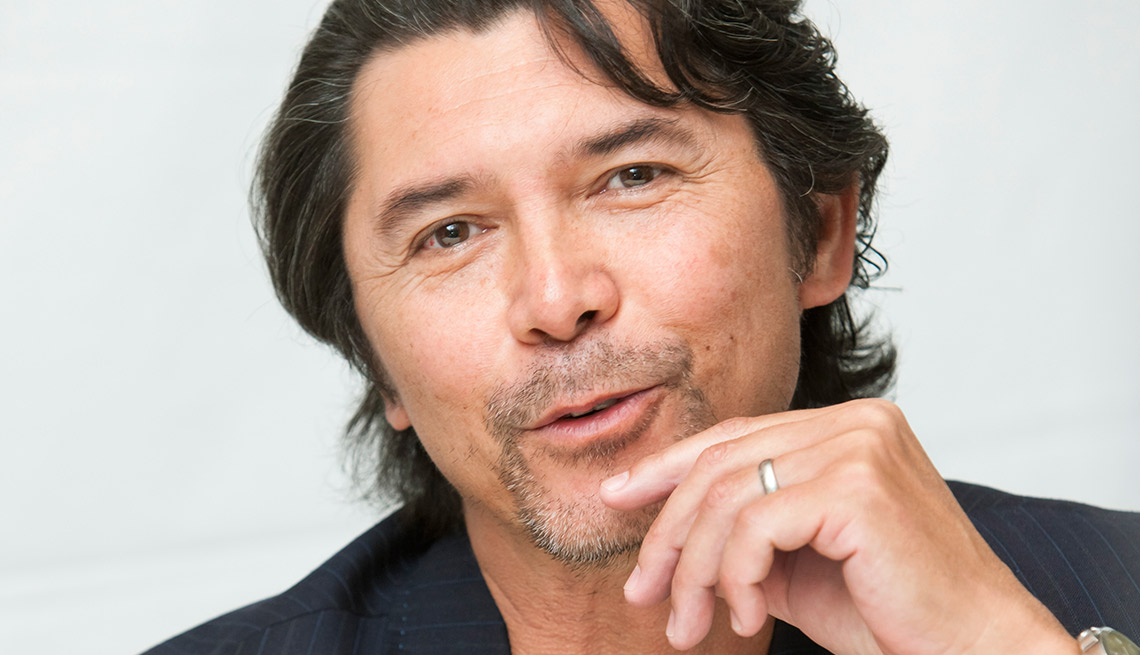 The contemporary western Longmire, having put its rabid fans through a 13-month hiatus after A&E execs rashly dumped the show in August 2014, returns to the screen on Sept. 10. That's when savior Netflix will make all 10 episodes of Season 4 available for streaming.

Not that the first three seasons lacked followers: Longmire, based on Craig Johnson's mystery novels, was averaging 5.6 million viewers per episode when tone-deaf A&E pulled the plug because the median age of the viewing audience was 60. The network hadn't reckoned on the wrath of fans, who took to social media as the #LongmirePosse to demand the show's revival.

Q: What attracted you to Longmire back in 2012?

A: "This is something special," I thought when I first read the script. There was so much between the lines, and you had the feeling that these characters had lived, you know?

Henry Standing Bear just jumped off the page at me. I was in love with him from page 3. It was a contemporary western, but it had this retro feel to it. It spoke of things like McCloud or Gunsmoke. This kind of show wasn't on the television landscape, which tends to homogenize everything, so I thought, "That's exactly why it's going to fail! Because it's so good and so different!"

Q: Were you surprised by the intensity of fan reaction to Longmire's cancellation?

A: I was more surprised by the decision [to cancel]. For A&E to say, "We don't want that kind of [older] demographic" is just offensive. The fans proved their loyalty — "We'll follow Longmire wherever it goes!" — and I know that had an impact on Netflix's decision to pick us up.

Q: How did you prepare for the role of Henry Standing Bear?

A: First of all, I read all the books. Craig Johnson is a very good friend of mine now — I even wrote the introduction to [his short story collection] Wait for Signs. But having played a number of Native American roles, everything from Lakota to Navajo and even Inuit, I knew there had to be specificity — to the culture, to the philosophies, even to the landscape.

So I reached out to Marcus Red Thunder, the show's technical adviser and the prime inspiration for Henry Standing Bear in Craig's books. He's a very good friend of Craig's, and he lives right by the Lame Deer reservation in Montana, so I said, "Listen, man, I want to come up and visit the rez."

I flew up there and got to know the people. I visited the high school and talked to the kids. I visited retirement homes and spoke to the older people, many of whom still walk in the Cheyenne way. And I soaked up the landscape — we're talking about sacred land, which was important for me to absorb to even approach the role of Henry.

I was adopted into the Cheyenne Nation — the family of Tiger Scalp Cane. I did sweat with the brothers, went through a naming ceremony — I have a Cheyenne name now — and spoke at the Lame Deer High School graduation.

Q: What specifically about Longmire do you think has inspired its fans to demand its renewal?

A: It's part and parcel of the novels — there's a rabid fan base for the books. I did a panel at the Tucson Festival of Books with Craig and Robert Taylor [who plays Sheriff Longmire], and it sold out in 10 minutes!

Q: The show portrays a strong but nuanced and multilayered friendship between two men — kind of rare these days, no?

A: Well, I think that's just another facet of the show that speaks to a real audience — to the heartland of America, to American values. I think a cycle of cynicism went through television in the last 15 years or so, but Longmire is clear-eyed, it is objective. It knows there are gray areas in the world, that there are even dark areas, but it tries to rise above that.

Unfortunately, a lot of our heroes on screen these days are antiheroes. They're cynical, they're loners, they've bucked the system. And that has kind of become a cliché. So in a way Longmire is a return to those old values we appreciated in television shows during the golden years.

Q: You also play foreman Luis Urzua in The 33 [out Nov. 13], a film about the survivors of Chile's San José mine collapse. That shoot must have been intense.

A: We actually shot it in a salt mine in a tiny little town called Zipaquirá, outside Bogota, Colombia. We went into this mine every single day for 2 1/2 months. It was total immersion, and it was tough — I had to lose 18 pounds for the role.

A: Well, those guys were down there for 69 days. They were there for 17 days without people knowing they were alive, subsisting on a spoonful of tuna and a sip of milk or water a day — until the milk ran out.

As soon as I got the gig, our director, Patricia Riggen, said, "OK, Lou — go on a crash diet!" They sent [actors] Jacob Vargas, Tenoch Huerta and me to the Biggest Loser camp for a day, just to jump-start us. I swear to God, they almost killed us! I'm in pretty good shape, but I thought I was going to die. They put us on 1,300 calories a day — [though] I shaved it down to 1,000 — and two to four hours of constant cardio [workouts] per day.

Before the shoot, I lost 15 pounds in three weeks. Then I get this phone call from Patricia saying, "Stop the diet! One of our sets just burned down, so we have to change the schedule. We need you to put the weight back on." So I put it back on before we started shooting, then had to lose it [again] over the Christmas break.

Q: I can't imagine you losing 18 pounds. How low did you go?

A: Well, I'm of an age now [53] where I'm doing projects that have to touch my heart. I want to put things out there that have something to say — things that transcend entertainment, that speak to the human experience. I've had a wonderful history of being involved with projects like that. You put out a certain energy to the universe, and oftentimes it's answered.