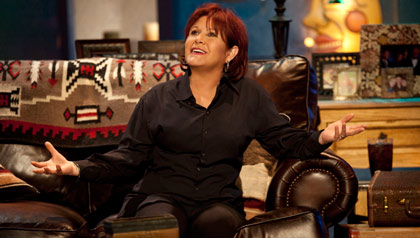 Carrie Fisher has spent much time in recent years telling theaters full of strangers the bizarre and tragic details of her life, including how her good friend died in her bed; how mental issues found her hallucinating entire cities; and how when she was a child, her father left her mother for Elizabeth Taylor.

On Tuesday and other nights this month, Fisher's Wishful Drinking, a one-woman show that has played to great reviews around the country, appears on HBO at 9 p.m. She tells AARP that relaying these tales on stage is far less trying than sharing them in more intimate settings.

"I had to get new medication from my psychopharmacologist, and he made me tell these stories for real. It was so upsetting," says Fisher, 54. "I wanted to say to this doctor, could you just read my book?"

Fisher — who refers to the 2008 best-seller the show spawned — deals with the probing of her life's rough edges through comic detachment, a feeling she conveys in the show with the line, "If my life wasn't funny, it would just be true."

One advantage of having such a bizarre family is that the comedy comes from sticking to the truth. And as a veteran wordsmith — Fisher has not only authored several best-selling books, she was also a top Hollywood script doctor — she can turn that truth into memorable pearls of wisdom.

"There are certain lines that, after time, my brain will start abstracting, like it's doing a puzzle," she says. "When I get into lines like, ‘Celebrity is just obscurity biding its time,' that's true. It's just arranging unruly feelings into tame words."

Fisher gets great material out of the time her father, singer Eddie Fisher, left her mother, actress Debbie Reynolds, for Elizabeth Taylor, and the later oddity of having her own daughter, 18-year-old Billie Lourd, date Taylor's grandson. She explores this strange circumstance with a huge family tree she calls "Celebrity Inbreeding," where she navigates her parents' numerous romantic liaisons to figure out if Billie and Taylor's grandson are related.

While much of Wishful Drinking concerns her often painful childhood, Fisher makes it clear that she is still close with Reynolds, and was with her father, who died in September.

"I'm not gonna spend my life judging something my dad did at 26," Fisher says. "It's a billion years ago. My father was not really made to be a parent, but he was a great guy, and he was great with me."

As for Reynolds, Fisher mentions that the two live next door to each other, which she says speaks for itself.

"It's not like we hang out," she says. "But her house smells different than mine. It smells good."

Given the peculiarities of her own adolescence, she has often swung in starkly different directions in order to protect her daughter.

"My experience growing up was that my mother was at work a lot, and I never saw my father at all," she says. "I hope my daughter doesn't remember it this way, but I was like this specter just constantly watching over her, never wanting her to feel like I've abandoned her."

The mother-daughter relationship also has been informed by Fisher's bipolar disorder, which she says can occasionally reverse the parent-child dynamic.

"Unfortunately, my daughter's had to grow up maybe faster than other kids," she says. "It's difficult as a child to have a mother who's bipolar. All the hairs on her neck are trained to me, because she has to see where I'm at in order to proceed. The unpredictable nature of it causes you to pay that much more attention."

But Fisher — who tries to read, write and exercise every day, although she admits that third item is often left behind — says that while certain traits remain the same, these days she's a calmer, relatively more stable person.

"Chaos is sort of my ongoing currency," she says, "but it has mellowed out a bit as I've gotten older. I don't go out looking for trouble much, and I've learned to head myself off at the pass. If I see myself going potentially in a wrong direction, I know what to do."

• Watch the My Generation segment on Carrie Fisher.