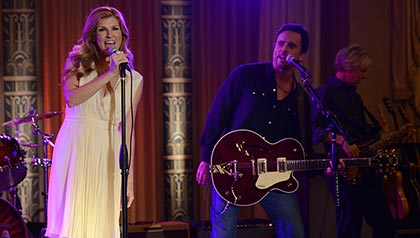 "Nashville" — one of the best TV shows you're not watching and should be — stars Connie Britton from "Friday Night Lights"; Charles Esten is guitarist Deacon Claybourne.

Dancing With the Stars, NCIS and Modern Family are doing fine without you. But, with the TV networks looking at ratings during the annual November advertising sweeps, we thought it time to recommend a few good shows that could use your attention. Here are nine in a variety of categories we can say are the best shows you're not watching — plus an online bonus.

Over four seasons, this NBC series has beautifully expanded from adaptation of a 1990s movie to become one of the finest grown-up dramas on television. The large Braverman family and its many joys and crises feel real — sometimes, as in the case of one character's ongoing battle with breast cancer, almost too real — and so do the intergenerational relationships and sibling rivalries. The writing is Emmy-worthy, and there is plenty of fine acting, particularly by Craig T. Nelson and Bonnie Bedelia, who often provide tiny moments of resonance. A recent episode combined both, ending with the elder Bravermans sitting on their porch swing listening to "A Whiter Shade of Pale."

Destined to live in the shadow of its ABC Wednesday night lineup-mate, Modern Family, The Middle is just as funny as the Emmy-winning Family — and probably more like the way most of us live. As a working-class, Midwestern couple struggling to get by with three challenging kids, Neil Flynn and Patricia Heaton are perfectly calibrated to deal with the chaos around them. The kids are a hoot, too.

The D.C. drama that debuted on ABC to little fanfare last spring perfectly balances the fine mix of gravitas and cheesiness required of a true guilty pleasure. For gravitas, how about the backdrop of the nation's capital, all those iconic buildings teeming with powerful people, including — you guessed it — the president himself? For pure cheese, you get weekly tabloid tales, plus a U.S. president who's as much creepy stalker as commander in chief. Tony Goldwyn is great as the POTUS who can't keep it in his pants, and Kerry Washington, the real star of the show, is fantastic, too, as the "fixer." Watch it once. We bet you'll be back for more.

NBC's Today show has all the (unwanted) drama, with cohosts spinning quickly through the revolving doors at 30 Rock, and ABC's Good Morning America, now highest-rated of the big three, has the hip factor. But CBS This Morning, still the ratings underdog, has Charlie Rose, who got the job earlier this year at age 70. Rose, Oprah's BFF Gayle King and Norah O'Donnell have an easy, unforced chemistry — a refreshing alternative to their highly caffeinated competitors.

Next page: Martha Stewart, plus an online treat. » 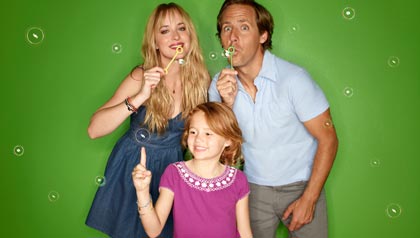 Dakota Johnson, Maggie Elizabeth Jones and Nat Faxon in 'Ben and Kate,' a comedy you might find funny, if you were watching it.

Admittedly, the pickings were pretty slim for new sitcoms this fall (seriously, CBS, Partners?). But it's not damning with faint praise to say that Fox's Ben and Kate is the best of the bunch. Dakota Johnson and Nat Faxon are consistently funny as a brother and sister reconnecting as adults. Johnson is particularly good as the single-mom straight woman to Faxon's good-hearted bozo. She's the daughter of Melanie Griffith and Don Johnson, and seems a natural comedian — not surprising to anyone who has seen her dad's cameos on HBO's Eastbound & Down.

We love a little "food porn" as much as the next amateur chef, but lately cooking shows have gotten out of hand, no? It's hard not to feel a smidge unworthy when such uber-entertainers as Ina Garten or Giada De Laurentiis effortlessly whip up complex meals and try to tell us how easy it is — and that's before they welcome their fabulous guests over to their decorated-to-the-hilt mansions to eat it all up while we watch. Martha Stewart may not have been the obvious choice to bring cooking shows back to the basics, but that's what she does on her new PBS show. No frills, no pretentious dinner parties — just solid, basic cooking techniques.

In sports, big games are what most people remember, but ESPN's fabulous documentary series focuses on what happens after the buzzers have sounded and the stadium lights are out. Originally planned as a celebration of the network's 30th anniversary in 2009, the series continues by popular demand. It's a straightforward conceit: Give noted filmmakers a camera and send them after a sports story close to their heart. Barry Levinson profiled the Baltimore Colts pep band; Wright Thompson looked back at the integration of the Ole Miss football team. Next up is You Don't Know Bo, Michael Bonfiglio's profile of two-sport sensation Bo Jackson, who, what do you know, turns 50 this month. It airs Dec. 8 on ESPN.

In the age of Honey Boo Boo and The Real Housewives of Fill-in-the-Blank, it's hard to find a reality show that doesn't require viewers to shower thoroughly after watching. Enter A&E's Duck Dynasty, which follows the Robertson family in Louisiana, a clan that has grown fabulously rich by selling — wait for it — duck calls, including its best seller, the "Duck Commander." The Robertsons are as filthy as they are filthy rich (you'd never guess the size of their bank account from the state of patriarch Phil Robertson's ramshackle abode), but they're kind of fascinating, and it's a nice change of pace to watch a reality TV family that actually likes one another.

Comedians in Cars Getting Coffee

The concept is absurdly simple. For each approximately 15-minute episode of Jerry Seinfeld's new online series (watch them at comediansincarsgettingcoffee.com), he hops into one of the sleekest or quirkiest models in his car collection, picks up a friend and drives to a nearby coffee shop. And then they talk. Just talk. About whatever comes up. Trust us, it's hilarious. Of course, when your friends include people like Alec Baldwin, Louis C.K. and Ricky Gervais, hilarity is kind of expected. "You have finally done the show about nothing," Larry David tells his old Seinfeld mate as they reach the bottom of their coffee cups.