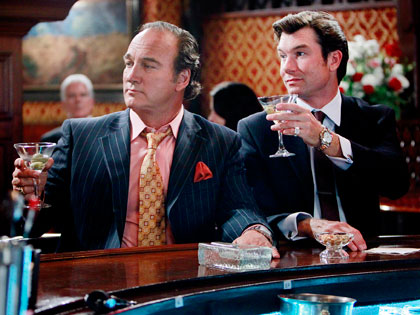 Jim Belushi and Jerry O'Connell on The Defenders.

After playing a suburban, sports-loving father of five for eight years on the hit sitcom According to Jim, you'd think that Jim Belushi would be a perfect go-to guy for any suburban dad role. So it might have surprised some when he returned in The Defenders, airing Wednesdays at 10 (Eastern time) on CBS, as a public defender standing up for the downtrodden in Las Vegas. But when we see his Nick Morelli struggling to revive his marriage — especially opposite his partner, Jerry O'Connell's smarmy playboy Pete Kaczmarek — then all seems right with the television world. Belushi spoke to AARP about the show, and how the strong comedy legacy established by his late brother John now continues on in his own comedic actor son, Robert.

Q: What appealed to you about The Defenders?

A: My agents said, "Please read this. You've been offered this role." And the letter said "Pete." [I read it] and thought, this isn't right for me. This guy is making love to a prosecutor. He's flashy. I'm in my 50s. I guess I'm hot. Maybe I'm hot. CBS sees me as hot, my agents see me as hot. Jim, you've got such low self-esteem. Why can't you see yourself as these other people see you?

Finally I go, OK, I'll play the role. I just don't think it's really right for me. And my agent goes, c'mon — drinking a martini in the morning? I go, "Oh. You mean Nick. The other role?" Then I read it and went, yeah, that's right up my alley. I can't believe I punished myself for two days.

Q: Nick is dealing with a busted marriage. Did you model that relationship on any aspects of real life?

A: No. Both of my divorces were not civil. I have no idea what a divorce is like going through it in a civil way.

Q: Your oldest son, Rob, is continuing the Belushi legacy established by John and then you at Second City. Did you see signs of comedic promise from him as a kid?

A: I saw signs of great charisma and charm. He's the smartest Belushi yet. I basically said to him, I don't know why you're not trying theater. We got quite a legacy here in the family. I said, "Don't not do it because of John and me. That's the wrong reason not to do it. Don't do it if you don't like it. But you don't know if you like it or not until you try it." So he tried it and he just took off, and he's doing great.

Q: Did you take any steps when he was young to try to instill a love of comedy in him?

A: No. He went to Crossroads [School for Arts and Sciences] here in L.A. for three years, which has a great drama program, and he was just screwing around. I'd go there and give improv classes and direct their cabaret show, and Robert wasn't in any of them. I felt that it was out of resentment or anger or something, so I moved away from him, and he opened himself up.

I love that John was my brother and he was so successful. When they say I'm in the shadow of John, I say, you know what? I like being in the shade. Embrace it. I'm proud of him. I was a fan of John's. People who compare me to him, it's like — I don't compare myself to him. The guy was brilliant. I'm just another actor. Another fan.

Q: Whatever burden Robert may be feeling, you probably had a bigger one.

A: Oh, yeah. I could get in any room for an audition because of the last name, but I had to work double time to get the job. I had to get rid of any preconceived notions, then create another identity that they liked. That stress made me work harder. That was my point with Rob — that you gotta work harder, which is great.

Q: You have a great interest in your Albanian ancestry. How did that come about?

A: Back in 1995, my father had left there sixty years prior, and I wanted to take him back. So we went back in '95, and I just fell in love with this little town that he's from, a little village in the mountains. A magical place.

Q: How important is it to you that your kids develop an appreciation for their ancestry?

A: Robert went with us on that trip in '95. My two [younger] kids, there's a certain point when they'll get curious and start asking questions. I actually bought my dad's property from his sister. I'm hoping to maybe reconstruct what was there, maybe go there once a year.

You know what it is? I miss my dad. It's more about missing my dad than anything else.

Q: It's an amazing way to bring him back.

A: Yeah. That was his last trip. He passed away the following June. We got it on videotape, us walking through the village. We walked up this little hill, and everyone from the neighboring villages sat at the top of the hill and greeted my dad. He turned and looked at me, and I said, "You happy, dad?" And he looked at the camera and said, "Yes, Jimmy. I'm happy." It was a great moment. I remember right where he was standing when he said that. I've gone back with my little brother maybe four times since then, and we go to that spot.