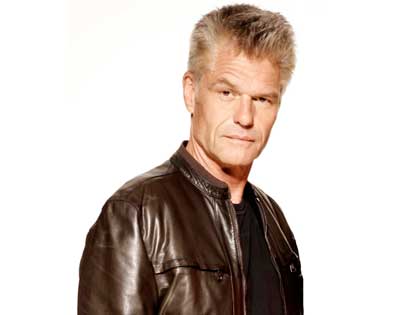 Harry Hamlin, 58, is well known to many television viewers from his stint on the 1980s show L.A. Law, and to cult film fans for Clash of the Titans. But despite this, Hamlin says, many younger fans of pop culture have no idea who he is. That's one reason he and his wife, actress Lisa Rinna, decided to do the TV Land reality show Harry Loves Lisa. Airing Wednesdays at 10 (Eastern time), the show documents how the two navigate their careers, including Hamlin's attempt to return to the business after a decade-long break to raise his daughters. AARP spoke to Hamlin about the ups and downs of being a veteran actor who dared to step aside.

Q: Why did you take a break from show business?

A: Because my first daughter was born. I have a 30-year-old son who grew up when I was working the most, who was living in Europe with his mother. So I didn't get a chance to see him that much, and he didn't get enough of me growing up. Once that bell has been rung, there's no way to un-ring it. So I said, "With these kids, I'm going to be here for them.' "

A: It hasn't been easy. It's been living hand-to-mouth, month-to-month, a patchwork of this, that and the other thing, but it has been absolutely worth it.

Q: Why did you decide to return to show business?

A: My kids are now 9 and 12, and much more self-sufficient. They require less of my time on a daily basis.

Q: When you were considering getting back into acting, did you involve your girls in the discussion?

A: Oh, yeah. They don't want me to do stuff that's going to take me out of town or require fifteen-hour days. Last week, for example, I worked on a show called Franklin & Bash, a new show for TNT, for four days, and for four days I did not see my children. So that was a bit of an issue, and they saw firsthand what that would be like.

Q: What are the greatest obstacles to your returning to the business now?

A: Nobody knows who I am.

A: Kids run the business. If they're 35, they were 15 when I left L.A. Law, and chances are they weren't watching it. A lot of them did see Clash of the Titans, so they know who I am from that.

It's a very mercurial business. There has to be a continual presence somehow — you have to remind them you're still there.

Q: Is that why you're doing "Harry Loves Lisa?"

A: This show is a way to reinvent myself and Lisa using a new paradigm. We were in the middle of the recession and the world was collapsing around us financially, so we said, "Why don't we do a show that harkens back to when Ozzie and Harriet was on TV?" There was a post-war zeitgeist when I was growing up that allowed these kinds of shows to be part of the popular culture, and we thought this might be a good time to reinvestigate that vibe. Reality TV is popular and gets big ratings, and contains a lot of dysfunction and blood on the walls — people screaming at each other and getting drunk and stuff. Our show is very family-oriented, and kind of sweet.

Q: On the first episode, you perform stand-up comedy for the first time. What's it like doing something so far out of your comfort zone at 58?

A: I've done stuff out of my comfort zone a lot in life, and it always somehow works out. It requires that leap of faith you hear about so much. That's why I did Dancing with the Stars at 55. If someone had said, "We're going on an expedition and we're gonna climb Everest," I would have gone for it, because at that time, I needed to do something to shake things up. I got out of it exactly what I wanted, which was that I was able to walk on that stage the first night and get through the dance. And the same thing happened with this. Doing stand-up comedy was not quite as large an event, but still required me to go way outside a comfort zone. Panic helps a lot.

Q: After Dancing with the Stars, did you find that this sense of rejuvenation stuck with you?

A: Yes. I came out of it a stronger, more adventurous person, and the following year was asked to do Billy Flynn in Chicago. During the process of asking me to play this part, they never asked me the one question you think they'd ask. Can you guess what that question might be?

Q: Whether or not you could sing?

A: There you go. The answer to that question would have been, "No." But I accepted the job after having done Dancing with the Stars and learning how to dance in five weeks. If I could learn how to dance in five weeks, I thought, maybe I could learn how to sing. So I hired a teacher here in L.A., and probably paid him more than I ever made doing Chicago. And I learned how to sing, and went on, and the reviews were great. We sold out the house. And all that having never sung a note on stage.