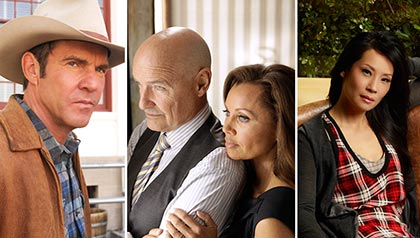 For true TV fans, there's something exciting about the arrival of new network shows, an autumn ritual that will begin later this month. Some of those programs may start off with a bang — and keep popping all season long and beyond. Others might fizzle out and disappear before you even knew they existed. While it's hard to predict a show's fate, we've come up with a list of the most promising of this season's pilots to recommend as the best television for grownups.

This haunted house story is set in a grand old Manhattan apartment building, where the tenants put down more than a simple deposit when they sign a lease. Lost fans will appreciate seeing Terry O'Quinn as the devilish landlord, and Vanessa Williams plays his equally scheming wife.

The nuclear submarine USS Colorado goes rogue after its captain, played by the talented Andre Braugher, disobeys a confusing fire order, forcing the crew to take refuge — from their homeland and foreign enemies alike — on an exotic island. The twisty, tricky pilot is the new season's most gripping, and it promises a wild ride as captain and crew, including Robert Patrick and Bruce Davidson, try to clear their names. (Read an interview with Andre Braugher)

Reba McEntire returns to TV playing a newly single mom named Reba whose philandering country star husband is jettisoned in the pilot. She relocates her family — her two teenage kids and her mom (Lily Tomlin) — from Nashville to Malibu, where "even the ugly people" are beautiful. It's a retro sitcom, right down to the loud laugh track and a wacky neighbor trope, but there's something refreshing about how skillfully it's executed and the way it centers around a 50-something woman trying to restart a career. Tomlin is wonderful.

Next: A new twist on Sherlock Holmes. » 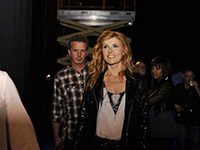 This modern-day take on Sherlock Holmes transports the famous detective from Scotland Yard to Manhattan. But here's the twist: Watson is a woman. CBS has always done well with detective dramas so dusting off history's most famous sleuth is a solid bet. Jonny Lee Miller (Dexter, the TV miniseries Emma) makes for a rakish Holmes, while Lucy Liu is the lady Watson. Comparisons to BBC's currently popular Sherlock are probably inevitable, but there's room for more than one take on this tale.

This sitcom centers on two lifelong best friends and business partners, Joe (David Krumholz) and Louis (Michael Urie). Joe's straight and about to get engaged and Louis is gay and living with his partner. It's not much of a premise, but the odd-couple pairing is good for more than a few laughs in the pilot. Also, it's from the team behind the successful old series Will & Grace and has a prime slot in CBS's Monday comedy lineup, so it'll likely get room to grow. 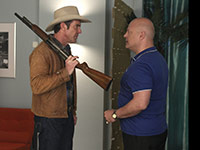 Dennis Quaid makes his first regular TV appearance as a reliably gritty and stoic Vegas Sheriff Ralph Lamb. It's a drama based on a true story about the fledgling development days of Las Vegas in the early 1960s and Quaid squares off against Chicago gangster Vincent Savino (Michael Chiklis) for control of the dusty desert town. Guess we know who wins.

Next: The Office actress gets her own sitcom. »

Ever wonder about the doctors in all those mob movies who attend to gunshot wounds for guys who, let's just say, can't exactly stroll into a hospital for treatment? This show hopes you do. Jordana Spiro stars as the surgeon of the title. William Forsythe plays the mob boss who calls on her. There's potential here.

Single mom Kate (Dakota Johnson, daughter of Don Johnson and Melanie Griffith) juggles child-rearing, dating and her aimless, flighty but good-hearted brother Ben (Nat Faxon). Faxon is a funny guy — he won an Oscar earlier this year for cowriting the screenplay for The Descendants — and he and Johnson have great comic chemistry. 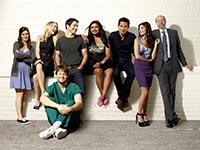 The cast of Fox's much-anticipated new show "The Mindy Project."

Mindy Kaling (Kelly Kapoor on NBC's The Office) gets her own sitcom, playing perpetually single young doctor Mindy Lahiri. The pilot has some fun with the conventions of chick flicks; otherwise, it's a bit uneven. Kaling is a funny lady, so expect this one to grow into itself if given enough time.

Given the close relationship many people have with their pets, a sitcom set at an animal hospital, with jokes cracked and heartstrings pulled each episode, feels kind of like genius. Having a monkey as one of the show's main characters — and a monkey in a doctor's outfit who rides a tiny ambulance, no less — feels a little less like genius. Justin Kirk (Weeds) plays the arrogant vet who runs the place.

An old-school procedural that follows the work and personal lives of firefighters and emergency workers at a Windy City fire station. It's from Law and Order producer Dick Wolf — need we say more? Eamonn Walker (ER, Oz) plays the battalion chief. 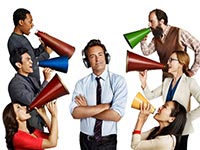 Matthew Perry and the cast of NBC's "Go On."

Matthew Perry takes another whack at post-Friends TV glory, playing a recently widowed sports radio host attending group grief therapy sessions. Sounds heavy for a sitcom, but Perry plays off nicely against a gaggle of quirky therapy patients. It's worth keeping an eye on.

The lights go out for good in this ambitious new sci-fi drama set on an overblown, futuristic Earth 15 years after a global blackout. The show follows a young girl trying to reunite her family and discover the reason for the mysterious power loss. The pilot feels listless but it's an intriguing idea, and there are proven Hollywood heavyweights — Lost creator J.J. Abrams and Iron Man director Jon Favreau — at work here so it could brighten.

Well, there's our list of must-see new shows. What TV shows are on your list? Let us know in the 'Tell Us What You Think' comment section below.