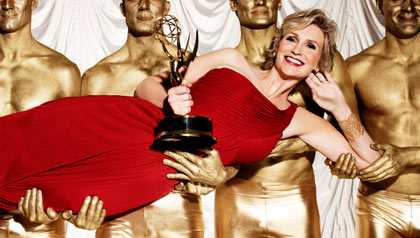 The star of Glee (the TV sensation in which she plays "delusionally cocky" cheerleading coach Sue Sylvester) has a revealing memoir out this week (Happy Accidents) and will host the Emmy Awards Sunday on Fox. As I prepared to interview her, every friend or colleague I talked to volunteered a different favorite Lynch role:

"She plays a mean guitar in A Mighty Wind."

"You've seen her dismantle Charlie Sheen in Two and a Half Men, right?"

From playing a bit role in 1988's Vice Versa with Judge Reinhold to headlining next year's Three Stooges with Larry David, Lynch has appeared in a remarkable 149 productions.

When I sat down with her in the offices of her publisher in New York, she shared with me her take on alienation, intimacy, divatude, gay marriage — and insight into how this multitalented actress has managed to embody such delicious evil that all America loves to hate her best-known character.

Q: Your book Happy Accidents is a work of raw emotion and brutal honesty. You examine your feelings of alienation, self-contempt and inadequacy, your fear of rejection and intimacy, your alcoholism. What happened in your life that gave you the confidence to reveal all that now?

A: I had friendships with two people in my life who, when I attempted to do my habitual behavior of building a case to break up with them, wouldn't allow me to do it. They both said to me, "I'm not going anywhere." And that moved me so deeply. It was a turning point for me in terms of intimacy — in allowing someone to really know me and really see me, and to allow the friendship to deepen.

Q: From an early age, you write, you "always felt a weird dark energy bottled up inside." That sounds a lot like Sue Sylvester. Will reading Happy Accidents help us understand her character better?

A: Yes, absolutely. That weird dark energy —when I was a kid, I didn't know what it was. I just had to "thrash it out," as my mother called it. I became quite intolerable, creatively and artistically, with other people. I wanted nothing more than to be part of a group, and yet I couldn't help alienating people.

I became quite a diva, and intolerant, and people knew when I was not pleased. Some people were afraid of me, and other people just kind of blew me off. But I wasn't making any friends. I only had one person who remained my friend, and he was my boyfriend for a while. Even though I told him I was gay, he was like, "That's alright." And even after I was rather evil to him, he still is my friend. And we still talk to each other every year on our birthdays.

Q: You also write that "Sue is always looking for the next fight. Years later, with lots of distance, I saw my young self in one Sue Sylvester." So I'm wondering, who's darker? The current Sue Sylvester or the young Jane Lynch?

A: The young Jane Lynch was as dark as Sue Sylvester is today, because Sue Sylvester really hasn't dealt with what has angered her. It's the vulnerability of the tenderness inside of her, the "inner child," if you will, manifested in [the character of] her little sister with Down syndrome. Sue decided that she was at war with the world to protect this child. And she was left too young with this older sister to take care of, this girl, when her parents abandoned the two of them. She was her caretaker and from an early age started arming herself. And today she still hasn't done the work to disarm herself. And that's why she's so blown away by [the character of] Will Schuester and his goodness. He actually inspires the softness in her.

Q: Just as Sue has "coach's pets" on Glee, it sounds like in your offstage life, Matthew Morrison, who plays Mr. Schuester, and Chris Colfer, who plays Kurt Hummel, have sort of become coach's pets off screen.

A: They are. I love them both. They both came to my wedding party that I had in California. Yeah, they're sweethearts. I live with my niece — she's 25 and she and Chris have become good friends, and I couldn't be more pleased. I love both of them so much. Matthew, he's my man. Every impression and observation is filtered through his compassionate heart. He's very kind.

Next: Jane talks about life with her wife Lara. >>

Q: You've said that the process of writing this book was very difficult.

Q: And Lara Embry, your wife, sort of served as your unofficial editor?

A: My unofficial editor and co-writer. Absolutely. She would go in there and take what I had done, and she would shape it. And she would say, "Now read this, does this ring true for you?" And I'm like "Oh! Yes! That's exactly what I was trying to say." She moved a word here, she added a word there — "I think what you're trying to say is this. Is that right?" And I'd say, "Yes, that's it!" And then in my own words I would tell her, and she would type it for me.

Q: During your freshman year at Illinois State University, you wrote, you "managed to continue to ignore the pounding refrain of 'You're gay!' knocking on my psyche's door." How were you able to overcome that denial and achieve acceptance?

A: I absolutely fell in love with somebody. You know. And so I had to look at it. Because it was so clear. I don't have a very high tolerance for discomfort, psychological or otherwise; I can't go a lifetime in denial like some people can. You see some people and you're like, "I can't believe they don't see this right in front of them!" I don't, relatively speaking, have much tolerance for denial.

Q: And you and Lara celebrated your one-year wedding anniversary?

Q: How’s that whole marriage thing working out for you , Jane?

A: It's working out quite well, let me tell you. We have not been faint of heart in our first year of marriage; we've taken on so much. Lara moved from Sarasota, where she left a thriving practice. She's a psychologist. Took her child, brought her to me. We live together in West Hollywood in an apartment, because we're renovating our house. You're not supposed to do all this stuff in the first year. I remember in Sobriety they say, "Don't do these things in the first year." And I think they probably apply to marriage. And then we wrote a book together. And we're doing great.

Q: Lara rows as a stress reliever. What's your outlet? Are you an athlete? What do you do?

A: I go to coffee shops for my outlet. Which is just not healthy at all. But Lara's been a great influence on me. I'm kind of a manic exerciser. I'll like exercise for a week and be crazy, and then I won't do it for six months. But she does it every day, and I go with her. She'll say like, "Let's take a walk…take a hike."

Q: And it was on one of those walks in Runyon Canyon that the genesis for the book came about —

A: Yeah. She was very gung-ho about it. She said, "You should write a book."

Q: Why did she say that?

A: Because I think she thought it was interesting. I always start with emotional motivation. She's a psychologist, she's all about that. So I think it jazzed her. She said, "Why don't we write it down? Maybe there's a book in here."

Q: What specific stories were you talking about that caused her to say, "You need to get that on paper."

A: The childhood stuff — when we were talking about my relationship with my family and my sense of alienation, no matter where I was. And how I went out of my way to feel even more alienated, instead of going toward people. And how the woman she knows today is not that way at all — I'm very open to connection and intimacy. I surprise myself.