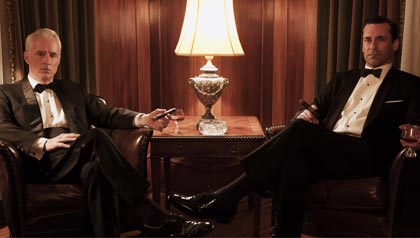 Everything you see on the popular series Mad Men has been chosen and placed in your line of sight for a reason:

The floral couch into which Pete Campbell settles uncomfortably in his Connecticut home, the light fixtures that frame the Manhattan hallways in the Sterling Cooper Draper Pryce offices, the liquor bottles from which so many cocktails have been poured, the vintage glassware from which those drinks are tippled — the list can go on.

AMC's hit drama has always been as much about its look as its story — how many other shows have inspired an entire Banana Republic clothing line? — but on its currently airing sixth season, plot points seem to slip away as easily as a Don Draper pledge of fidelity. By now, the characters have been well established. We know what to expect from them, or at least we think we do. 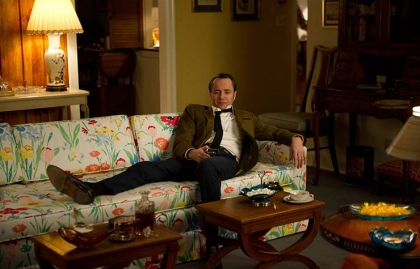 The scenery, however, can still surprise. Indeed, one of the joys at the dawn of each new season is picking through the visual cues to detect how much time has passed as the show moves through the 1960s.

With Mad Men now set firmly in the seminal year of 1968, the look is shifting from the dark mahogany and knotty pines that have largely defined it toward a more colorful, sometimes psychedelic template.

As the story continues to nudge up against the 1970s, those changes will become even more pronounced, which set decorator Claudette Didul expects will be a challenge.

We’re kind of turning to new colors, the burnt oranges and the avocados. And you’re going into the not-so-great-looking furniture and look and artwork,” Didul, 51, says of the time period in question. “Things are getting a little murkier.” 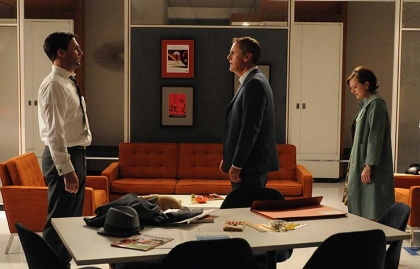 When Didul joined the show at the start of the fourth season, she was thrown right into the fire of its artistic process. Her first assignment from show creator and writer Matthew Weiner was huge: Design the then-sparkling new SCDP offices.

In Mad Men time, the switch took place in 1964, and the new space marked an important tonal and visual shift, away from the staid traditional look at the old established agency.

Roger Sterling’s office was reflective of the scrappy new start-up’s fresh look: chrome details that were then becoming popular, long windows for more natural light, pop art on the walls and hip, minimalist furniture Didul found in commercial architecture books of the era gave the space a bright, forward-looking vibe.

The furniture in the mod Sterling Cooper Draper Pryce offices that looks so hip to present-day viewers would more likely have been found in drab settings like hospitals or insurance offices in the '60s.

The work drew raves from viewers and designers alike, and it introduced her to the Mad Men set machinery, which starts with the legendarily secretive Weiner's vision of precisely how he wants a scene to look. He relays his thoughts to production designer Dan Bishop and Didul, who then leads a crew of more than a dozen whose job is to research, track down, procure and set up every piece of scenery.

For ideas, she combs through vintage decorating magazines from the era like Architectural Digest and House and Garden. Some of her best and most surprising sources are those commercial architecture and decorating books — the furniture in the mod Sterling Cooper Draper Pryce offices that looks so hip to present-day viewers would more likely have been found in drab settings like hospitals or insurance offices in the '60s.

The search for inspiration is often easier than the hunt for the actual items. The team searches antique stores, both brick-and-mortar and online, and keeps a close eye on auction and classified sites like eBay, Etsy and Craigslist.

Next page: Don Draper does Manhattan. » 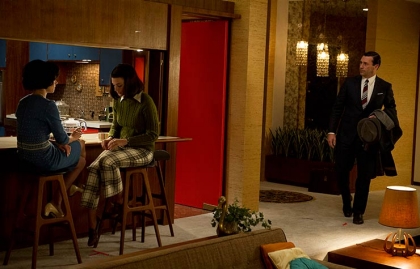 It's now 1968 on "Mad Men," and Don Draper's Manhattan apartment looks its age.

Among Didul's favorite finds are the Erik Buch-designed bar stools in Don and Megan Draper's Manhattan apartment (see right), the splashiest new set from season five. She unearthed the stools on eBay and had them shipped to the set from Virginia.

For this season, Didul's team tracked down the perfect light fixtures for the newly expanded SCDP offices from as far away as Spain, Brussels and Italy.

"It's like an archaeological dig," she says. "It's all great. It's what existed, and we need to find it."

The show's viewers do their own digging, too. One of the weekly rituals of ardent fans is combing through each episode to ferret out anachronisms, which makes invisibility the true goal for Didul and crew.

"People like to see something and say, 'Oh, that never would have existed,'" she says. "You hope that they can just sort of sit back and relax and enjoy the show."

One of the big advantages Didul now brings to the job is her memory. The Mad Men crew includes many who lived through the period they're now re-creating, Didul among them.

She was born in 1961, which makes her about the same age as Bobby Draper on the show. And with the proceedings now nearing the end of that decade, she finds herself drawing more heavily on personal photos and recollection. The Campbell home in suburban Connecticut is heavily inspired by her own childhood home in nearby Westchester County, N.Y., where she grew up the daughter of a lifelong adman.

"It's that reproduction French provincial and colonial look, and authentic antiques," she says. "The furniture, the architecture — it reminds me of home."

The nostalgia conjured by such a loving visual re-creation of the era may be the key to the show's appeal to boomers, for whom each Sunday night airing is a stroll down memory lane.

Don Draper, cad that he is, knows the power of reviving a bygone era. Recall his famous Carousel slide projector pitch to Kodak executives at the end of the show's first season, when he might as well have been speaking about Mad Men itself:

"It lets us travel the way a child travels," he said, "around and around, and back home again, to a place where we know we are loved."