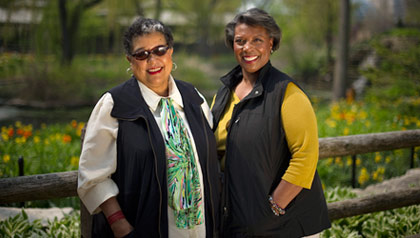 Grannies on Safari is a TV show sponsored by AARP and hosted by Pat Johnson (left) and Regina Fraser.

Regina Fraser and Pat Johnson, two erudite 60-somethings, turned their passion for world cultures and knack for reinvention into a new gig: hosting Grannies on Safari, their own travel show. They even sold their fur coats to raise seed money to launch the project.

The third season of their Grannies on Safari kicks off Sunday with travels to India (two shows), Peru (two shows), South Africa (Western Cape) and Zanzibar. The series airs on PBS stations nationwide and in 117 countries via UK Travel Channel. AARP is the exclusive sponsor, and selected the grannies to be the faces of AARP's 2011 "What's Next" campaign.

No matter where they go, the duo pack just one suitcase! Here's what's in it:

Both breast cancer survivors, Fraser and Johnson say their purpose is to inspire folks of all ages to seize the day and see the world.

"People see these rotund, mature women climbing mountains and meeting extraordinary artists, and think, 'What am I doing sitting here?'" says Fraser. Proof of their ability to inspire is every viewer who has contacted them to ask, "Where are you going next?" and "Can I come along?"

The Chicago residents took a group to Egypt in January — arriving the day civil unrest erupted. True to form, the grannies seized the moment and ended up reporting on events for news operations back home. A woman who saw one segment got in touch, explaining, "I'm going to be 70 soon. I like to travel. Wherever you are going next, can I come with you?" Three weeks later, she joined them in South Africa.

Nothing could have been more satisfying for two women who see themselves as role models in pursuit of "discovery, knowledge and adventure."

Looking back, it's easy to see how their career paths led them to the partnership and friendship they now share. Their acquaintance started 30 years ago when their children attended the same school in Los Angeles. Their friendship grew roots after their careers reconnected them in Chicago in 1994. Johnson was a commissioner in Chicago's Cultural Affairs Department and Fraser a marketing executive for Chicago-based United Airlines, which donated tickets to support international exchanges.

"I was in awe of Pat, that she knew all these artists around the world and knew all these fascinating things," Fraser recalls. "If you take a dart and throw it at a map, she's been there. We became friends then because we have so many things in common."

That said, they are very different personalities.

Johnson has been to 76 countries. She's the cultural connection, the seeker of artists. She's also the stoic, the deadpan, the partner who would be happy to never again hear the question: "Do you know what you're eating?"

And how does monkey taste?

This season, Johnson added a new country to her long list: Zanzibar, a spice island off the coast of Tanzania.

"Zanzibar," she says dreamily, stretching out the syllables. "Zanzibar was quite impressive and exotic and a totally new experience for me."

Antarctica, the only continent she has not visited, tops her bucket list.

"I would like to commune with the penguins," she says, "walk out on the ice, get up close, have a little conversation."

Fraser has been to 39 countries. She's the enthusiast who eagerly samples exotic foods (roasted slugs!) and willingly hops aboard any animal that serves as a mode of transport: elephants, camels, even an ostrich in Israel.

Every trip is a learning experience, whether it's visiting new places or seeing new glimpses of places they have been before. They inevitably don the local garb, sometimes with glamorous results, always with good humor. When the van breaks down, or a revolution breaks out, they roll with it.

"Having a sense of humor always works," Fraser says. "There are a lot of funny things that happen while traveling and it helps us when we share them and keep laughing."

The banter and bicker comes naturally. The two opinionated women had different takes on the Taj Mahal, one of their stops this season.

"I thought it was one of the most beautiful places I've ever seen," says Johnson. "It lives up to its reputation."

Fraser's opinion: "It was just OK to me because it was a memorial. In India, the Amber Palace took my heart because it was a living, breathing fort where people had worked and lived. I could imagine the people going through their daily lives."

Each episode includes stunning panoramas, lush sounds of nature and indigenous music, travelogues, ceremony and customs, and vignettes of local artisans plying their trades: the Moto weavers in Zanzibar, pottery makers in Morocco who still mix clay with their feet, Zulu doll makers in South Africa. Each season, the Grannies have been more intentional about building sustainable cultural bridges.

Next: Watch a teaser from the show. >>

"We are women who have worked all our lives. We relate to and respond to these people, and understand the difference between eating and not eating, of girls not going to high school because they need an electric olive press," Fraser says.

They have not wavered in their belief that boomers, never content to watch from the sidelines, are raring to see the world. "We're living proof" of that generation's penchant for reinvention, Fraser observes.

"They want to go to that village in Costa Rica and build that school. They want to be productive, to give back, to leave a legacy," says Fraser, who at 68 refers to herself as a "leading edge baby boomer."

"It has nothing to do with age or whether you are traveling or joining a community group or helping people in hospice. We are still productive people with a desire to participate in life."

Beating a life-threatening illness takes determination. Fraser was in her late 20s, with a 1-year-old daughter.

"I was given a blessing to be alive. From that experience I promised myself to never give up, to follow my dreams, to do all the things I wanted to do and try to always show those I loved that they mattered," she says. "I still live my life like this today. Doing this TV show is a result of that pledge I made to myself 40 years ago."