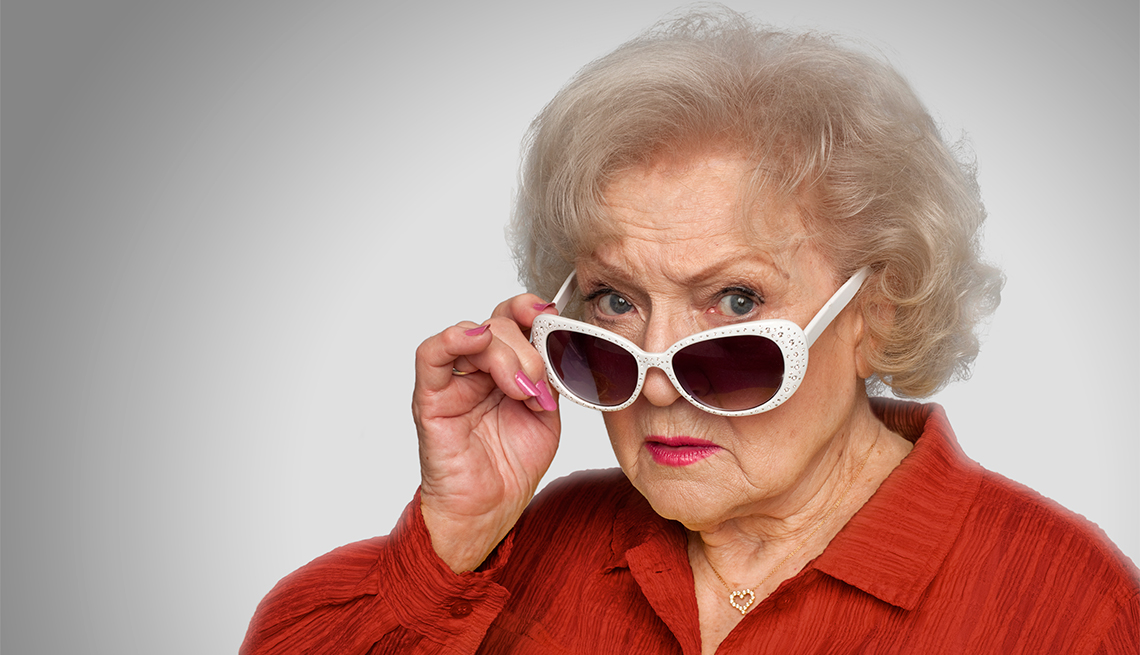 Betty White says. "I learned that at my mother's knee. Age was not important. It was where your head was."

In honor of Betty White turning 95 this month, AARP looks back at a 2011 interview in which White discussed her return to TV fuled by a snicker-inducing Snickers Super Bowl commercial and her then role as celebrity member for AARP.

Watch: This is What Old Looks Like in Hollywood

Actually, considering what a hot property the Golden Girl is these days, TV Land's desire to lock her into a long contract is understandable. Not only does Betty have Hot in Cleveland returning with new episodes June 15, she has her new If You Ask Me (And Of Course You Won't) book out and a new comedy reality show, NBC's Betty White's Off Their Rockers, on the way. And the amazing, multiple Emmy-winning TV Academy Hall of Famer is also relishing her latest role — celebrity member for AARP.

"I never thought about age much," Betty insists. "I learned that at my mother's knee. Age was not important. It was where your head was."

Betty's AARP campaign revolves around embracing age and ridding oneself of any worry about it — themes she's completely natural with and enjoys supporting. Her mother never lied about her age, Betty says, nor did she.

That, of course, makes her the rarest of rare birds in Hollywood, where it's considered necessary to career survival to avoid disclosing one's number of years on the planet. "It does become important on your résumé," she allows. "It's just that my age has been an open subject for so long, people see me and think, 'Oh, there comes that old broad again.'"

Looking back, she does recall other people worrying about her age for her, starting with television emcee Al Jarvis, whose six-day-a-week live variety show Betty joined in 1949. "He said, 'You know, now is a good time to start knocking off a couple years from your age. It will come in handy as you get older.' I was 26 at the time. He said, 'Tell everyone you're 22.'"

It turned out, however, that Betty wasn't very good at fudging. She found herself hesitating in an interview, saying, "I was born in, nineteen, ah, nineteen — well, I was really born in 1922, but they want me to knock four years off my life, so you do the math."

"Those guys were so nice," she continues, "they always knocked the four years off — TV Guide, TV Mirror, everybody did. Isn't that something?"

Betty is at a loss to explain the pop star-sized surge of love coming her way from the public and the industry over the past couple of years, with her snicker-inducing Snickers Super Bowl commercial, her Saturday Night Live guest hosting gig demanded by fans on Facebook, her movie roles in The Proposal and You Again, and her TV show guest appearances and series.

"I've never really gone away," she points out. "I'm just very grateful to not only be busy but enjoying all of it.

"I love Hot in Cleveland, which is not so new now. I love the girls, love working with them," she adds, speaking of co-stars Valerie Bertinelli, Wendie Malick and Jane Leeves.

Betty completed the second season of Hot in Cleveland, shooting on a Friday night. The following Monday, she was on a plane heading East to begin a book tour. Ahead she has her latest TV enterprise: hosting and serving as executive producer of Off Their Rockers, the American version of a hit European show that has senior citizens playing pranks on younger people.

"For once the older people come out ahead," Betty proclaims. She's quick to add, "I think it's kind of fun. It's nothing harmful."

She's looking forward to employing actor pals to pull off the punking — "older character actors and actresses who would like to work. We can't use some of our famous friends because it would give away our setups."

Having that much input into the show sounds like a lot of work, but Betty says, "I'm OK as long as it doesn't get to be too much pressure. It mustn't be that. It must be fun."

Where does she get the energy to do all she does?

"I'm blessed with good health. I'm so lucky with that," she acknowledges. "I love what I do. I'm blessed with that. I don't think of it as work, because I'm doing what I enjoy. I've never needed much sleep. I go to bed late and get up early. I'm rarely in bed before midnight and I'm often up till 1 o'clock, and then I'm up again by 6:30. If I get four or five hours of good sleep, I'm all right."

Even though Betty's cast mates and others tend to be protective of her, she's known for insisting on doing things for herself, including driving. Although she's had more dogs and cats surrounding her in the past, today she has but one dog with whom she shares her home: a 7-year-old golden retriever she describes as a "career change service dog" that came with the name Pontiac.

"I like to think of him being named after the Indian chief, not the car," she quips.

When animals are mentioned, Betty lights up: "Animals are my real life. I have to stay in show business to pay for my animals." She's been involved with the Morris Animal Foundation and the Los Angeles Zoo for decades, as well as other animal-supporting groups.

As part of the ramp-up to her book's release, the publishers sent her 2,500 copies to sign. "I came home and my entire living room was full of books," she recalls. She eschewed any human help. "Pontiac and I just sat here and I just kept at it, pile after pile, until I got it done."

If You Ask Me "is not a memoir," she says. "My second book, Betty White in Person, had various subjects and I wrote kind of like an essay on each one. They wanted the same format 25 years later, to see how my opinions have changed about working, sex, grief, happiness, sadness and so on. So I was investigating myself."

One thing she found was that "I'm a little less tolerant in some ways. My tolerance level is short when people abuse privileges, show ingratitude or lack of appreciation." She recently expressed disgust toward Lindsay Lohan and Charlie Sheen and other trouble-making stars who "party too much, don't learn their lines, are unprofessional and they grumble about everything" as she was quoted in London's Daily Mail.

Long renowned for her old school Midwestern work ethic, arriving prepared and with a good attitude wherever she goes, the Oak Park, Ill.-born star admits, "I get hacked about that. I don't usually show it, but I do get hacked."

It's been 30 years now since Betty lost the love of her life, her third husband, popular emcee Allen Ludden, after 18 years of marriage. She has been going solo since then. Her words about surmounting grief and hard times bear the weight of experience, simple as they are: "I really do believe the positive approach beats the negative," says Betty. "Everyone has something good they can hang on to. You have to focus on the good stuff, and celebrate the good times."