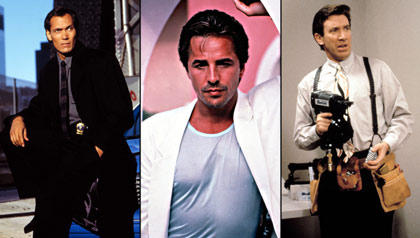 Television is aging upward in a dramatic way.

Thanks to the success of current shows starring Tom Selleck, Kathy Bates and William Shatner, a parade of stars in their 50s, 60s and 70s is making TV pilots now with hope of getting on the air in the fall.

Julia Louis-Dreyfus, 50, has a much-buzzed-about HBO satirical comedy, Veep, on the way. She plays the bespectacled vice president of the United States. Cybill Shepherd, 61, is in an ABC culture clash comedy pilot about an American-and-Indian family. Terry O'Quinn of Lost, 58, stars along with 79-year-old Della Reese in ABC's Hallelujah pilot that uses a gospel choir as a sort of Greek chorus.

Meanwhile, look who's back on the air this spring. Mad About You's Paul Reiser, 53, is in a new NBC comedy with an April 14 debut date and, of course, ABC's highly touted Body of Proof starring Dana Delany, 55, premiered in late March.

"I plan to be acting 'til the day I die, so I think it's just wonderful," says Delany of the surge in 50-plus stars "There are so many channels now, so many ways to watch programming. I think networks in particular have realized that one way to get people to watch is to put something familiar out there."

In addition to familiar performers, there are reboots of favorite old shows to entice mature audiences — Charlie's Angels and Wonder Woman are being remade. And perhaps taking a page from AMC's Mad Men, shows set squarely in the middle of the 20th Century are being developed. Pan Am and Playboy each promise to take us back to the swingin' '60s, when traveling by air was glamorous and Hugh Hefner was young.

So what has happened to the TV industry's customary dismissive attitude toward the no-longer-young?

The older audience is growing. David Poltrack, chief research officer of CBS, says "the 55-plus audience in 2002 was 29 percent of the adult population. In 2011, it's 33 percent. In 2015, it will be 36 percent." At the same time, the percentage of population in the 18-to-49 age group — the demographic long taken for granted as being of the highest value to advertisers — is shrinking. "Baby boomers are a vital component of the overall market. If advertisers persist in buying 18-to-49, they're going to lose sight of this very important part of the audience."

Older viewers act and spend differently. Advertisers used to believe older consumers were less likely than younger ones to try new brands or products, says Steve Sternberg, who has led the audience analysis divisions of several major advertising/media agencies. "But that mind-set is starting to change. Baby boomers have more money to spend than other groups, and they're spending it, and advertisers see that."