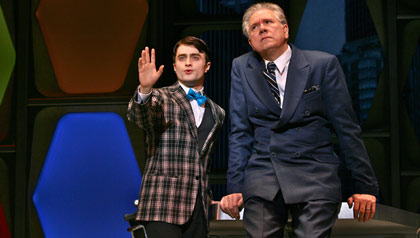 Daniel Radcliffe and John Larroquette star in How to Succeed in Business Without Really Trying.

John Larroquette has done many things in his life, including raising three children and celebrating 35 years of marriage with wife Elizabeth. But one thing the New Orleans-born actor has not done is star in a Broadway show. Until now.

At 63, Larroquette is playing boss to Daniel Radcliffe (aka Harry Potter) in the new revival of How to Succeed in Business Without Really Trying. It's in previews now and opens March 27. We caught up with him before a show at the Hirschfeld Theatre.

Q: Why has it taken you so long to get to Broadway?

A: I began my career in Los Angeles and started working fairly quickly. Series happened. Through the years, L.A. was offering enough to keep me there. It's been impossible for me to come here previously because of my series schedules.

Q: How do you like working with Daniel Radcliffe?

A: Very, very much. He sets the bar for being willing to work hard. He is, in a real sense of the word, a trouper. This is a great job for him. ... He, of course, has a very successful franchise with the character Potter, and now he has a chance to settle in and do the other kinds of roles he wants to do.

Q: Complete with an American accent?

A: Which he does perfectly, too — he's very facile with that accent. He goes in and out of it at will.

Q: Do you have a lot of Harry Potter fans hanging around?

A: Outside the theater at night there's a phalanx of them. He's very generous with them as well.

Q: Do you stay in touch with your Night Court crowd? Will they be coming in to see the show?

A: The creator, Reinhold Wigge, will be here soon. If they're in New York they'll come and I'll be very happy to see them again.

Q: You recently returned to NBC's Chuck as that debonair, womanizing master spy Roan Montgomery and received great response from critics and viewers. What lured you to do that show?

A: I don't do a lot of guest shots on television. I chose that one because of who is in it. Zachary Levy is very funny, very good. I also did several CSI: New York episodes last year. I love working with Gary Sinise.

Q: You're a longtime New Orleans Saints fan. Have you met Drew Brees?

A: I've not met Drew. At some point, if the show goes as long as possible, I'll go back to New Orleans. I like to do what I can for the city. And I'd like to thank the players for rescuing me from all those years of embarrassment when they finally won the Super Bowl.

Q: You grew up in the Ninth Ward, which was hit especially hard by Hurricane Katrina. How was it to go back?

A: It was terrible to see the home I grew up in as a child decimated. Some of the neighborhoods are coming back now. Last October, I went back and could see some parts are being resurrected.

Q: You're a collector of special first editions and rare books. What's your pride and joy?

A: I have a beautiful limited edition of Waiting for Godot signed by Samuel Beckett. I treasure it; I have a box to protect it. It's so meaningful because that play had such an impact on the theater and every play that came after it. I have 800 to 900 books of Samuel Beckett's works. I love reading. I'm fortunate enough to have signed books by Faulkner, Steinbeck, Thomas Pynchon. I have emotional favorites; A Confederacy of Dunces by John Kennedy Toole, not only because it takes place in my hometown, but because it has an opening scene where he's waiting for his mother in front of a big department store clock, and I used to wait for my mother under the very same clock, at the D.H. Holmes department store. We'd go in and buy candy there on Canal Street.

Q: How do you like playing the adulterous company president, J. B. Biggley?

A: I'm getting more comfortable with the actual acting of it, once my mind could move away from the deep concentration I put in the dancing and singing. It's very funny, too. I've always enjoyed the piece. If it's stuck in time a little bit, it's also salient today, with all the attention on corporations and the incompetence of big business.