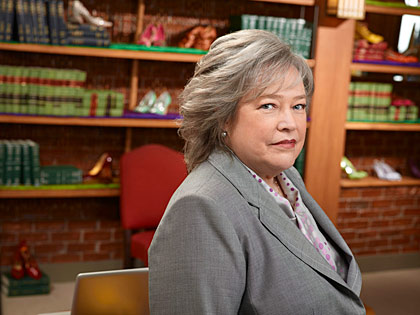 "The fact that there is this heroine of a certain age is interesting to people," says Kathy Bates, star of Harry's Law.

Kathy Bates, star of NBC's new Harry's Law, is thrilled that she's playing a character to whom older viewers can relate.

"The fact that there is this heroine of a certain age is interesting to people," says Bates, 62. "Harry, who looks like a normal woman, is grappling with issues in the middle of her life, and she's taking this road that she hadn't taken before."

Two and a Half Men's Holland Taylor. Read

Speak Out!
You know Kathy Bates from movies such as Misery and Primary Colors. And now the Academy Award winner is on NBC's new show Harry's Law. Are you a fan of the show? Do you like Bates' role? Join the TV Talk community and chat with fellow readers about Harry's Law. Do

Bates' character, Harriet "Harry" Korn, is a patent attorney who makes a sudden switch to defending the disenfranchised. She may be someone that people who are trying to reinvent themselves because they have lost or quit pressured jobs can relate to, Bates says.

If anyone understands career pressure, it's Bates. She spent her first few decades of adulthood waiting for her big break, and occasionally wondering if she had made the right career choice.

"Even when I started doing it, I questioned myself constantly about what I was pursuing," she says. "There were moments when I felt disillusioned, or that it was not for me. I really had to fight to come back to acting, but it always found its way back to me somehow."

Bates finally got that break in her 40s, as James Caan's obsessed fan in 1990's Misery. The sheer terror of her fanaticism earned her the Academy Award for Best Actress.

But even with an Oscar, Bates found herself wondering if Hollywood had faith in her.

"One of the moments when I got disillusioned with this business was when I did Dolores Claiborne," she says of the 1995 film that was, like Misery, based on a book by Stephen King.

"I still feel it's some of my best work on film, and it was dropped by Columbia in terms of marketing, so no one saw it. I was tremendously disappointed, because I knew the work was good. It was an opportunity to play a strong female lead, and it was very difficult to find those kinds of roles — especially back then, when people weren't willing to bankroll it for a woman."

But she did find satisfying and entertaining roles in Fried Green Tomatoes, The Late Shift and Primary Colors, to name a few, and she took on some brave new roles, too, such as the one in 2002's About Schmidt. Bates got a lot of media attention, playing opposite Jack Nicholson, for having the courage to do a nude scene in a hot tub when she was in her 50s.

She ultimately negotiated to do the scene her way, and found the reaction to it from older women extremely gratifying.

"It was vindicating," she says. "It was nice to hear from women across the country who felt that they were at last being seen for what they looked like."

As Harry Korn, Bates continues to be vindicated, playing a character who has lived — and continues to live — a full and satisfying life, and has no shame in exhibiting the wisdom of her years.

"Harry's been there, done that," says Bates. "She's lived her life, seen a lot of things, knows who people are, and at her age, she's just not going to take the guff any more. I enjoy playing people who know what's going on and don't put up with any bull."

But perhaps even more satisfying for Bates is helping prove to the television industry that older characters can not only be interesting, but profitable as well.

"Ours has always been an industry that's been interested in the culture of the young. At a certain age, it becomes more difficult to focus stories on the older population," she says. "So it's wonderful to have a show that can dispute that, come up with good ratings and find an audience."