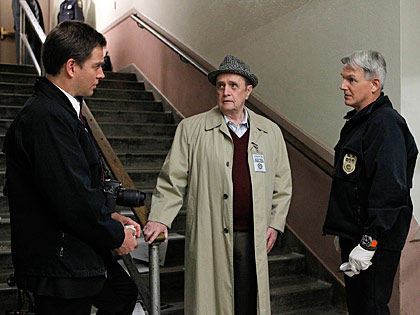 Comedy legend Bob Newhart delivered an Emmy-worthy performance this week on the CBS hit NCIS, playing Dr. Walter Magnus, a medical examiner who comes to visit his old friend Ducky (David McCallum) and finds himself embroiled in a murder. If Newhart should get an Emmy nod come summer, he will have as many nominations for dramatic roles as he received for comedic acting.

Speak Out!
Do you watch NCIS? What did you think of Bob Newhart's role? Join the TV Talk community and chat with fellow readers fans about this or any of your favorite shows. Do

The irony of this is not lost on Newhart, one of the few actors who has starred in not just one, but two of the best-loved sitcoms of all time.

"I guess they're trying to tell me something — maybe that I'm not very funny," says Newhart, 81, well aware of how untrue that is. But Newhart used good old dramatic instincts to get into character.

"I'm not a method actor, and I never had any training," says Newhart. "What I try to do is, when they send me the script, I read it and say, 'Yeah, I know this guy. I know who he is and I know what he's going through,' even though maybe there's nothing to say I went through the same thing."

Newhart broke onto the comedy scene in a big way when his first album, 1960's The Button-Down Mind of Bob Newhart, became the first comedy album ever to hit No. 1 on the Billboard charts, and also won him Album of the Year and Best New Artist at that year's Grammy's. His two hit sitcoms, The Bob Newhart Show in the '70s and Newhart in the '80s, made him a household name, with the latter earning him three Emmy nominations for Best Actor.

But to no one's greater surprise than Newhart's, his television acting of late has leaned toward the dramatic, with guest roles on ER and The Librarian earning him two more Emmy nods.

He stresses, though, that this shouldn't be seen as a shift in his attitude toward performing.

"There isn't a Hamlet inside me, screaming to get out," he says. "I love doing comedy, and I love making people laugh."

To that end, Newhart still does around 20 stand-up comedy dates every year, performing one or two classic bits, but overall, mostly new material.

Newhart finds inspiration for his routines from observing everyday life, which can be a challenge for a man as recognizable as he.

But if he never has a vacation, per se, he does know how to relax and enjoy life. His social circle includes longtime friends Don Rickles, Tim Conway and Mike Conners, all of whom he dines with frequently.

"We go out with the Rickles, I listen to how well his career is going and then we go home," jokes Newhart.

With all his experience Newhart still hasn't lost the sense of excitement that comes from the show business life.

"You never lose that awe of it," he says. "I belong to the Bel-Air Country Club, and you see that some of the young performers who join the club are kind of full of themselves. You want to say to them, ‘See that chair over there? Clark Gable used to sit there. And Jimmy Stewart used to sit right there. And Dean Martin used to sit there. Don't try to impress anybody. Nobody here is going to be impressed.' "

At this point, Newhart has his life right where he wants it, mixing work with play, comedy with drama, and the awe of show business with an approach toward everyday life that will provide him with new material for as long as he stands on a stage.

"We have a fireplace, and I want to get one of those bellows," he says. "I could have an assistant and say, ‘Can you get this for me?' but I want to do it myself. I don't want to become a hermit. I might go to the fireplace store and come up with a 12-minute routine. I don't know what today is going to bring, but I don't want to be cut off from that. Every day's a revelation."