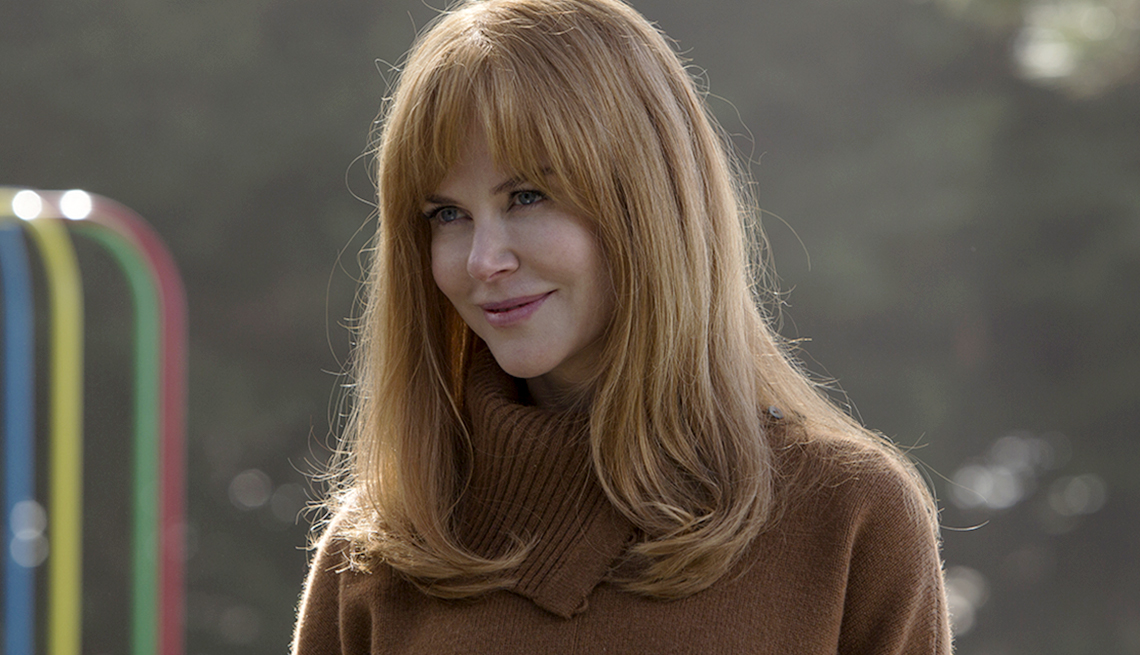 Are you as hooked on HBO's Big Little Lies as I am? If so, you may have spotted the biggest lie of all in this addictive series: the big fat hair on actresses Laura Dern, Nicole Kidman and Reese Witherspoon.

As a grownup woman — one with fine, aging, chemically processed, hormonally challenged hair — I have to say the XL manes on these three stars leave me feeling "dis-tressed." Indeed, I was inconsolable until I talked to a few on-set stylists, who hinted darkly at wigs and hair extensions.

Though the stylists declined to speak on the record (and why would they?), their mere mention of trade secrets made me feel better right away. (As does the heartening notion that star power can be ours with just a snip, a spritz and a fluff.) So see if you, too, don't get a lift from these insider tips furnished by two celebrity hair pros and yours truly.

The right cut fattens and flatters

Thicker-looking hair at 50+ is not just about length. Glamsquad creative director Giovanni Vaccaro — whose hair-and-makeup teams make both celebrity and "civilian" house calls in Miami, Los Angeles, New York and Washington — urges us to opt for a chop: "Three basic cuts totally change thin hair," Vaccaro says, "adding texture and volume where it's needed most: around the face and scalp."

1. A modern pixie is très versatile, Vaccaro says. "It can be worn chic and sleek, or — for an edgier effect — spiky and tousled. Adding highlights will increase dimension and create the illusion of more hair, while using styling pomade or paste breaks up the top layers and suggests more movement." (For inspiration, just think about the badass crops we've seen lately on the likes of Robin Roberts and Kris Jenner.)

2. A chin-length bob provides a "blunt, solidly defined shape that manages to look lush, confident and sexy," he says. (And that's the case whether it's worn sleek or wavy.) "For a modern, youthful look, be sure to stick with a side part. Long, full bangs can provide extra hairline camouflage."

To disguise a widening part, I've found it helps to shift your part slightly (or change it from one side to the other) every few days; this adds a body boost, as well. Fans of the bob include Ellen Barkin, Angela Bassett, Katie Couric, Vivica A. Fox and Mariska Hargitay.

3. A shoulder-length shag has lots of layers that can simulate fullness, Vaccaro points out. To play up its movement, he suggests, "Kick the ends and pieces out, not in. Then run your hands through your hair [to produce] a tousled style that's cool yet timeless. A few quick twirls with a curling iron can create soft, random waves around and away from the face for extra width." To see how the celebs pull off this look, check out photos of Jane Fonda (in her shorter, signature version of the shag), Diane Keaton or Lisa Rinna.

Even if you start gobbling hair vitamins today, eating hair-promoting foods and dabbing on minoxidil (the OTC drug that's said to encourage hair regrowth), you won't see any results until five or six months from now. While you wait for that to happen, try these three stopgaps to turn fine hair fat — and pronto.

1. A root-lifting spray. This will rocket that first half-inch of hair up and off your scalp — and thicken its texture, too. "Think of it as a push-up bra for fine, thin hair," says Vanderpump Rules hair pro Julius Michael. I've experimented with Marula Pure Beauty Oil 5-in-1 Volumizing Spray, as well as John Frieda Luxurious Volume Root Booster Lotion.

2. A root camouflager. If you color your hair, the inevitable gray or white regrowth translates visually as "scalp;" this in turn makes your part appear wider, hairline recessive and entire head of hair skimpier. But a root-camouflaging spray — matched to your base color, of course, and used on dry hair — can hide the emerging evidence between shampoos. (The product possibilities here include L'Oréal Paris Root Cover Up or Rita Hazan Root Concealer.) And there's an unexpected bonus: Stretching salon color as long as possible between visits can protect fine hair from chemical breakage.

3. A dry shampoo. Want to double your hair volume and revive a flattened day-two (or -three) blowout in seconds? Bend over at the waist and mist your hair with a dry shampoo from the underside. Now straighten up and use your splayed fingers to rake and groom your hair back into place. To stay ready for touch-ups, stash a purse-size mini-mist next to your lipstick or mobile phone.

For more beauty and style tips for women age 50+, check out The Woman's Wakeup: How to Shake Up Your Looks, Life, and Love after 50, as well as AARP's new Beauty & Style special edition for tablets.