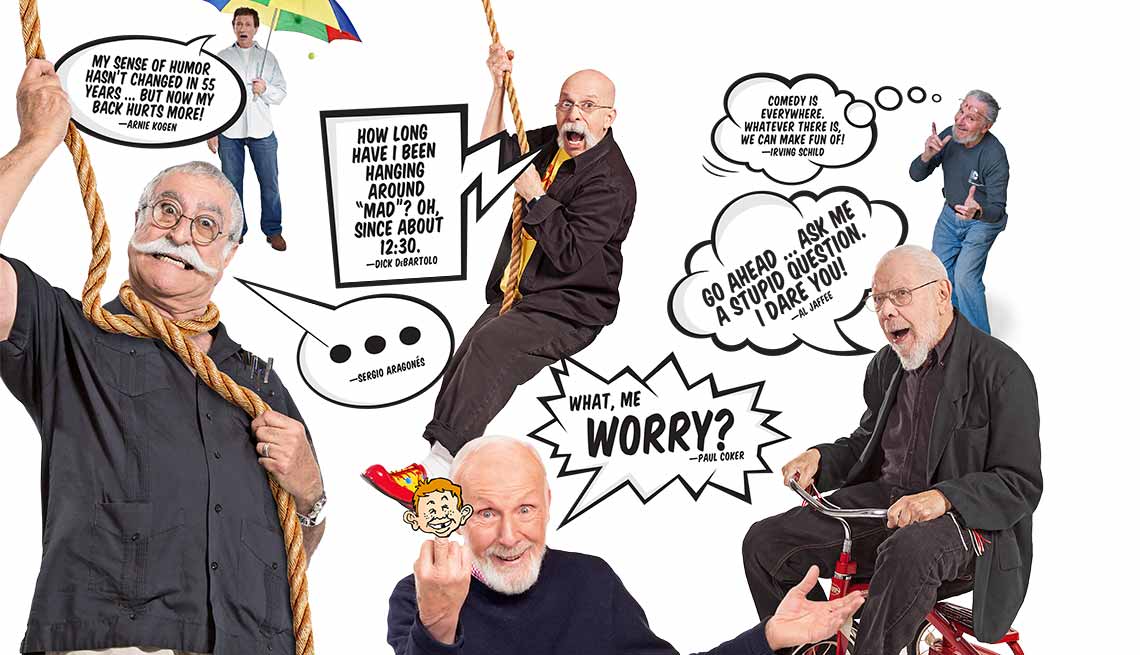 Meet the original "Mad" Men, who have been contributing to the magazine since the 1950s.

Is Al Jaffee out of zingers? After nearly an hour's worth of layup questions from a reporter, the creator of Mad magazine's long-running "Snappy Answers to Stupid Questions" feature hasn't uttered a single withering comeback.

Jaffee, 95, sits in a corner office at the satire rag's Manhattan HQ, wearing a scruff of white goatee, a black shirt and blazer, indigo Levi's and an amiable smile. The handle of his cane is carved into the shape of a dog's head — "my cane-ine," he quips.

Jaffee has been contributing illustrations and jokes to the magazine since 1955. (It launched in 1952.) Along with "Snappy Answers" — a comic that offers snide retorts to bland inquiries — he invented Mad's back-page fold-in, an illustrated riddle that collapses to reveal a new image that contains the answer. The first one, from 1964, depicted scandalous newlyweds Elizabeth Taylor and Richard Burton — and folded to show the "handsome young stranger" who'd be Liz's "next in line." The most recent shows a rowdy saloon and asks, "What Group Has the Worst Drinking Problem?" Folded in, the illustration transforms into a water tap and offers this grim answer: "The People of Flint, Michigan." 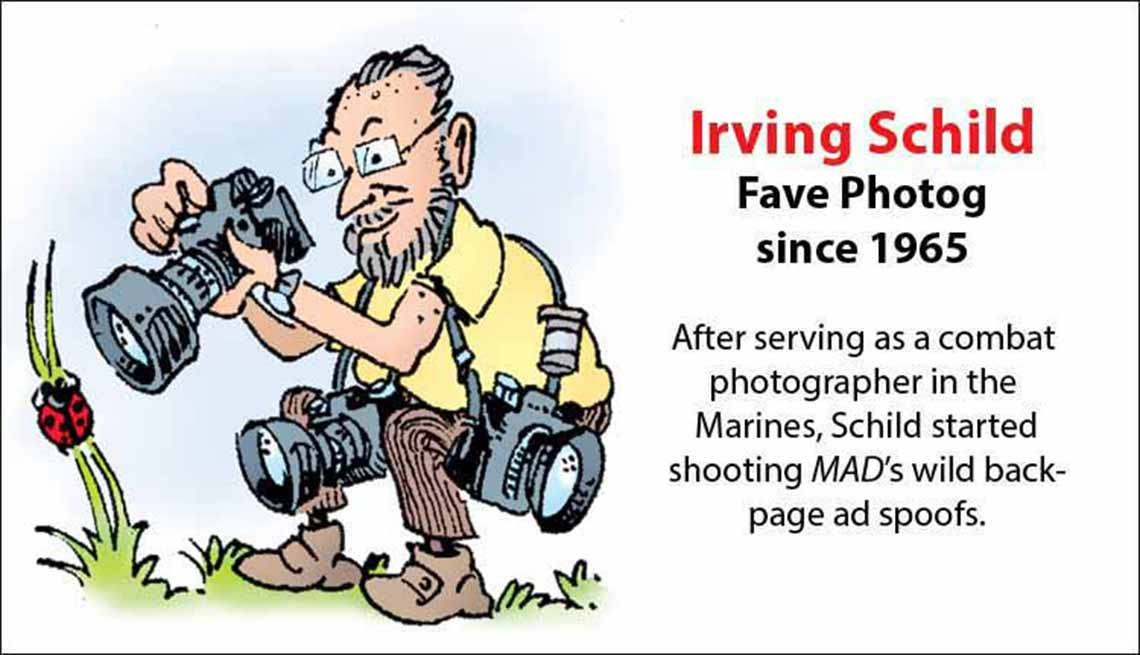 Jaffee says he doesn't follow film-star foibles the way he once did, but Mad's full-time staff members — including editor-in-chief John Ficarra, 61, who sits nearby — keep him up to date. Other recent fold-ins have tweaked the anti-vaccination movement and the disgraced comic Bill Cosby. "Because we've worked together for such a long time, we know how to anticipate each other's problems and how to help," Jaffee says.

The humorist isn't kidding about working together a long time. Though Jaffee is the magazine's longest-serving contributor, several writers and illustrators boast tenures that rival his. Contributing editor Nick Meglin, who won't give his exact age, joined in 1956. Frank Jacobs, who specializes in parody poems and song lyrics, started contributing in 1957, when he was 28; he turns 87 in May. TV and film satirist Dick DeBartolo, 70 — who today sits chatting with Jaffee and Ficarra — is a newbie by comparison: He has been writing for Mad only since 1962. In all, along with many newer writers and artists, Mad has eight active contributors who have been affiliated with the magazine for more than 50 years. 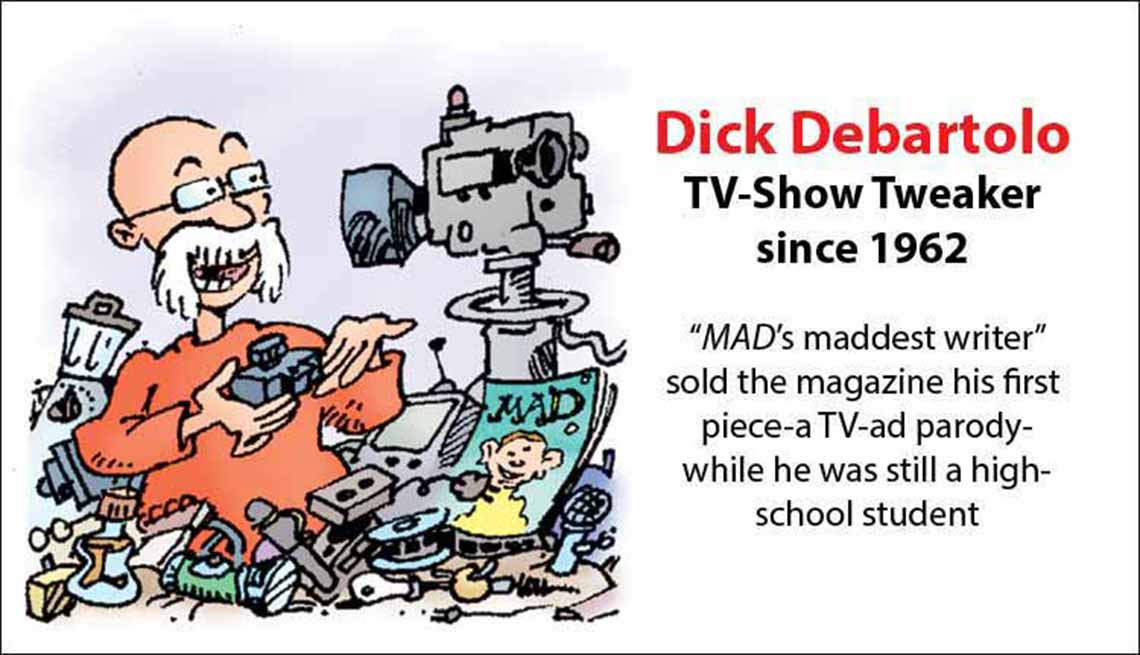 The old saw about laughter being the best medicine has proved resistant to scientific confirmation, though a 2010 Norwegian study seemed to indicate that a vigorous sense of humor correlated to a greater survival rate up to age 65. Other findings tout laughter's effectiveness as a reliever of stress, booster of immunity and promoter of social cohesion. For the grand old men of Mad, slinging gags while at the iconic humor publication of postwar America certainly seems to have conferred age-defying properties. "I'm a little bit amazed that I'm still able to function at a reasonably good level," says Jaffee. "I'm very grateful to whatever has kept me going." 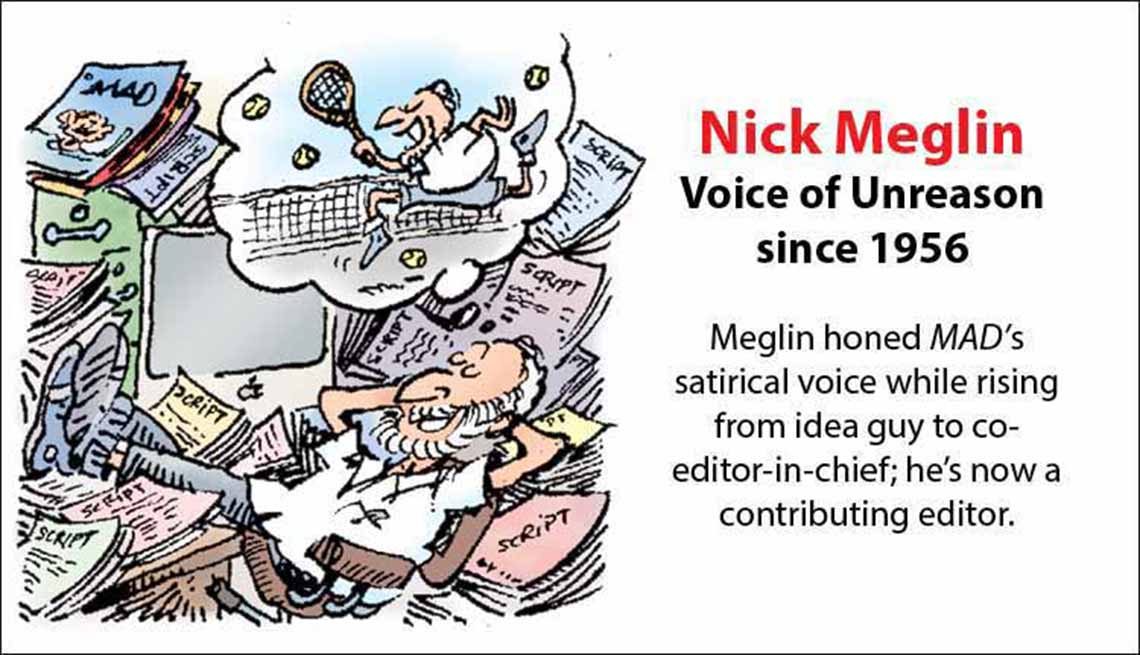 Ficarra says that Jaffee doesn't give himself enough credit for his own creativity. "We'll call him up with a fold-in idea, and we'll say, 'In the first picture, we want the Civil War, and we have to have both the Confederate and the Union soldiers in it, and there's got to be a cannon in it. And then when you fold it in, it has to be Kim Kardashian on Rodeo Drive, and she has to have a dog in her hand. Good luck.'" Though Jaffee might be stumped at first, Ficarra says, he'll quickly invent a way to make the concept work.

Member Discounts: Save 25% or more when buying tickets in groups of four from Live Nation

When he's stuck, Jaffee focuses on something else until inspiration strikes. "I'll decide to wash the dishes," he says. "And then: 'Wow, how about if I try this?' And then I dash back into my studio, and it works. It's worked for 60 years."

"That's why you never bought a dishwasher," Ficarra tells him. "It'd be the end of your career." 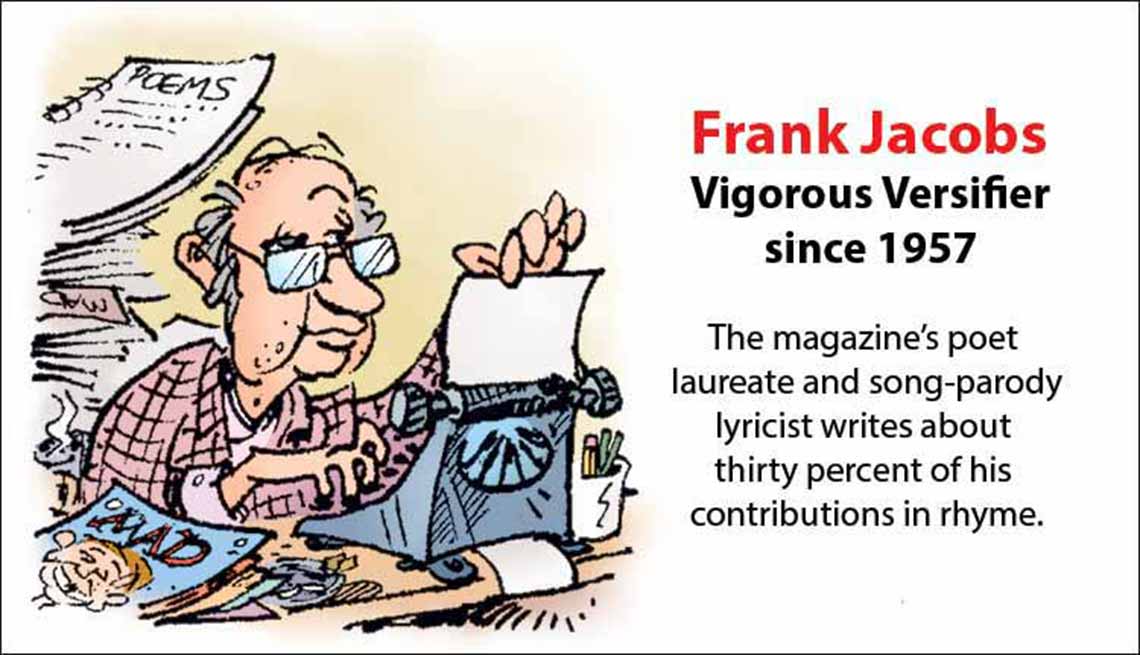 Mad's ironic humor is now so ingrained in American culture that it's easy to forget how radical it was when it first appeared. Founding publisher William Gaines launched Mad as a comic book that made fun of the conventions of the comic book industry. Within a few years, it became a magazine and started making fun of everything: politicians like Joseph McCarthy, films like On the Waterfront, authors like Ernest Hemingway, and ads for products like Winston cigarettes.

In the anxious and earnest Cold War era, this cheeky attitude was a revelation to teenagers, and the magazine terrified some parents, who wrote to the FBI to ask whether Mad was brainwashing their children. A brigadier general was reported to have called it "communist propaganda," which inspired a $1.5 million lawsuit from Gaines, as Jaffee recalls: "Bill told the general, 'I don't want your money. I just want you to apologize.'" After the general publicly denied having linked Mad to communism, the case was closed. 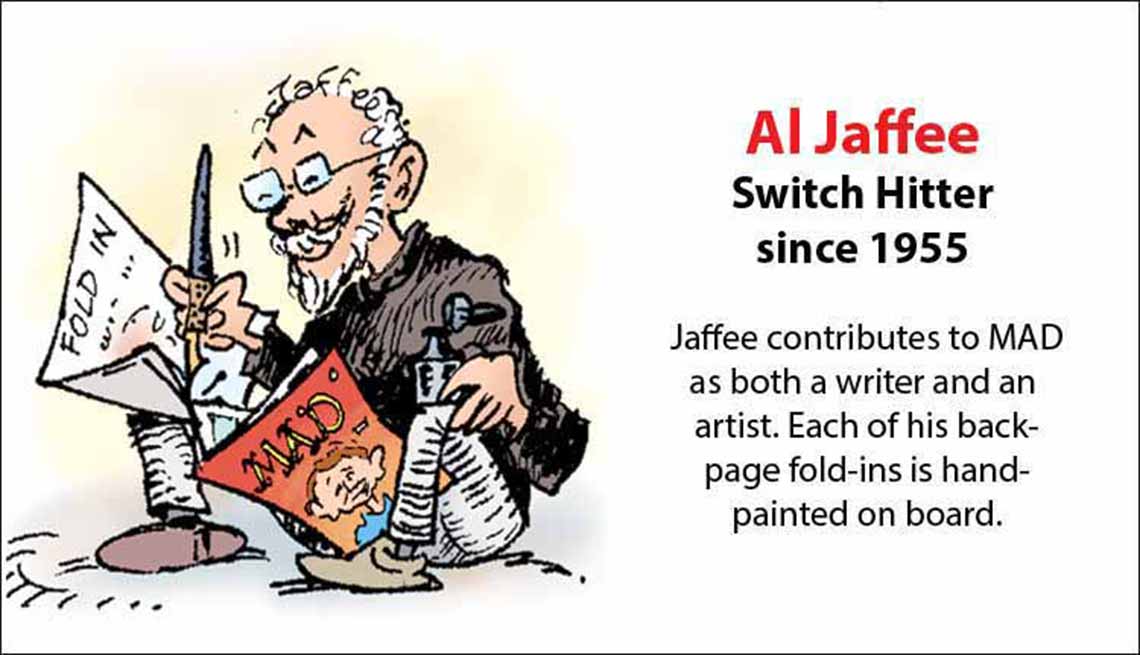 "But then Bill told us not to pursue communism that much anymore," DeBartolo jokingly adds.

The controversy MAD stirred up was good for business: Circulation climbed over 1 million; 58 percent of college students read it; and, by 1963, perennial cover boy Alfred E. Neuman — that gap-toothed, red-haired doofus — was so well known that a letter from New Zealand addressed only with his portrait arrived at the magazine's offices unopened.

But the magazine's true impact on the culture wouldn't be felt for decades, when the boomer kids who spent their allowances on it grew up. Mad begot wilder humor mags such as National Lampoon, which arrived in 1970, and, later, Spy; it's also the spiritual father of Saturday Night Live, Airplane! and a host of other modern comedy franchises, from The Simpsons and The Daily Show to The Onion and Funny or Die. Every jokester who uploads a parody movie trailer to YouTube or photoshops a funny caption onto a picture owes a debt to Alfred E. Neuman. 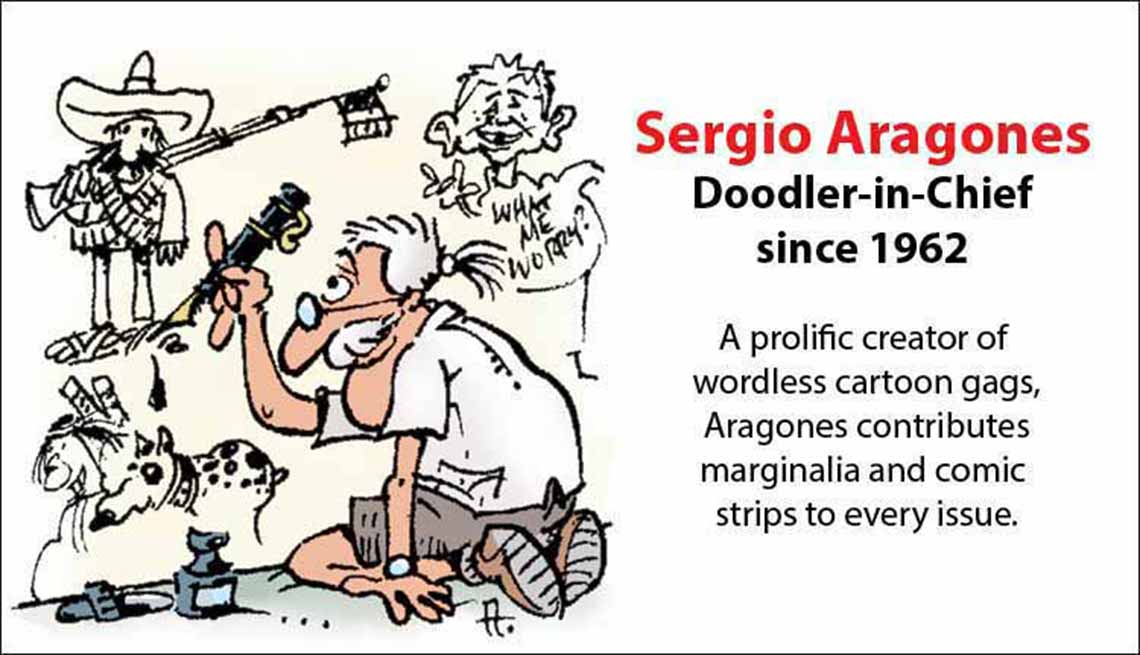 Gaines, who died in 1992, at age 70, remains a strong influence on the writers and artists who knew him. "Bill had a paternalistic streak — there's no doubt of that," says Jacobs. "He wanted to create a Mad family, and he did." Jacobs wrote a biography of Gaines published in 1972, shortly before Mad's circulation peaked at 2.8 million.

In the magazine's heyday, Gaines forged this family — referred to in the magazine as "the usual gang of idiots" — by taking them on international vacations and cultivating a singularly silly workplace culture, once filling the office water cooler with five gallons of white wine. 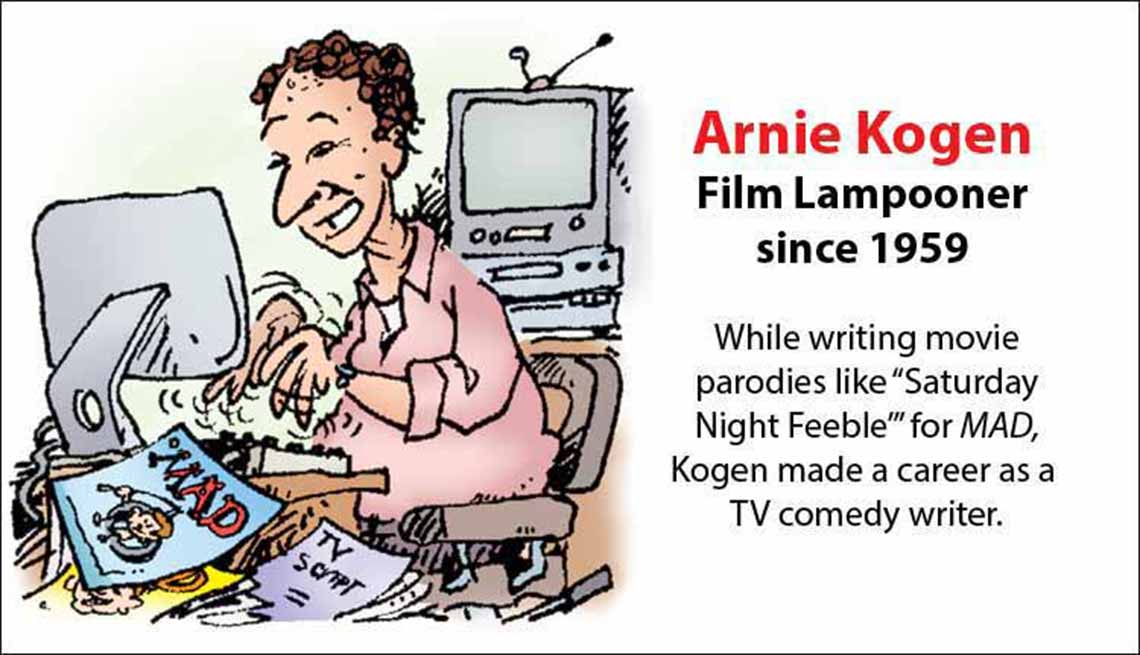 But after Gaines' death, change came to Mad. Its cheap pulp black-and-white pages were gradually replaced with glossy color. The circulation slipped. (It is currently 150,000.) In 2001, after a nearly 50-year hiatus from running ads, the magazine started accepting them. Mad's new publisher, DC Comics, sought to capitalize on its cultural cred with brand extensions such as Alfred E. Neuman gear and Fox's MADtv show, which ran from 1995 to 2009.

Over the years, the comedy universe that Gaines helped create has burgeoned: Mad competes in a crowded marketplace of online humor, one that moves far faster than the print magazine's bimonthly schedule. There's now a Mad website with daily content, and sometimes it lands a viral gag: When Apple launched a buggy version of its maps app, madmagazine.com responded with a takeoff of a famous New Yorker cover in which the city's geography dwarfs the rest of the world's. The Mad version — "now using Apple Maps" — located the Champs-Élysées near Ninth Avenue, and the Sea of Galilee on the equator. But Mad's brand of pen-and-ink irreverence has struggled to keep pace with the culture's voracious appetite for ruthless insta-satire, especially when the real world often seems like a parody run amok. "It is very hard to be funny, and it's getting harder all the time because life keeps getting weirder and weirder. It's harder for us to mock it," Ficarra has admitted. 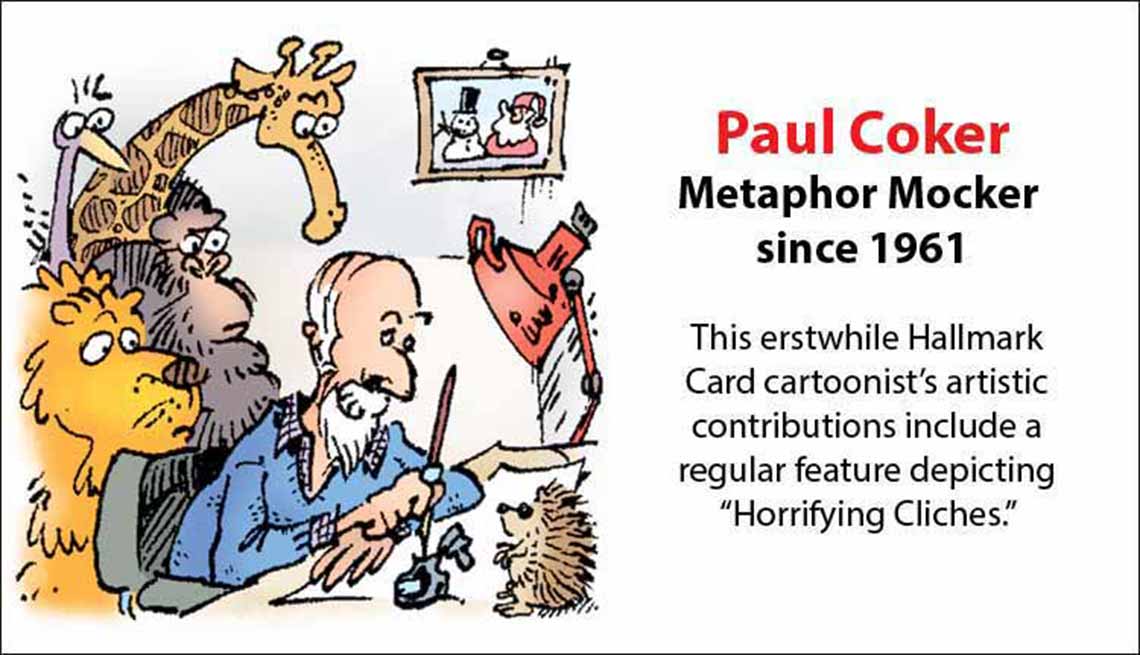 Still, the gang of idiots mocks on, diminished as often by death as by retirement. Artist Sergio Aragonés, 77, has been cartooning for Mad since 1962. "The more you do it, whatever you do, the better you become at it," he says. "And if you love it, you become even better." Aragonés is known for the wordless marginal drawings that crop up in every issue of Mad. "Humor is basic: You're making fun of something," he says. "What changes is that 'something.' The sense of humor doesn't change."

Executive editor Margaret Guroff is the author of a new history book, The Mechanical Horse: How the Bicycle Reshaped American Life.