Tom Arnold washes his hands and wants you to know about it in this hilarious tale of celebrity Twitter post gone wrong.

When three of my favorite things on the planet happen at the same time, it's almost too good to be true. So you can imagine why, as a huge fan of sports, country music and New Orleans, I was in hog heaven in February 2013 when the Crescent City hosted the Super Bowl.

New Orleans is my favorite Super Bowl host city. I think all Super Bowls should be played there. Even though it has hosted a ton of the games, New Orleans always appreciates that it is chosen and welcomes the crowds with open arms. Miami, by contrast, is like, "Oh, no! You idiots again?"

One of the coolest parts of Super Bowl week is getting to hang out with the legends as well as the active players from teams who won't be on the field. I used to host Best Damn Sports Show Period for Fox and I miss the guys associated with it, but we always catch up during the pregame week. It's also a great time to make some corporate show money if you are a stand-up comic with sports ties. That's part of the reason I was in town.

Now, I have a tradition before I go onstage where I run into the men's room and take a final look in the mirror. It's not a pleasant experience, but I do it to make sure there's nothing unpleasant hanging around (food, sweat), and I suppose it's a way to look briefly into my soul and say, "You can do this, Tom." My New Orleans show — opening for the great country trio Rascal Flatts — was no different. I ran into the bathroom, did a quick check in the mirror and felt ready to kick butt. But this time as I stood offstage awaiting my cue I pulled out my phone and checked my Twitter feed. Big mistake! Someone had just tweeted: "Tom Arnold does not wash his hands in the bathroom. Disgusting."

Yes, it would be disgusting if it were true! But it was not. 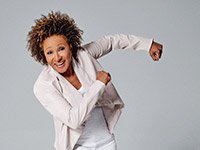 I realize that I must immediately fix the erroneous report of this heinous act I've been accused of. I tell the emcee to hold the show and I sprint back into the bathroom where there's like 17 stalls, so I have no idea who may have done this. "Listen here," I say to the whole room. "Someone just tweeted that I don't wash my hands in the bathroom and that's disgusting, especially because I didn't have to wash my hands. I was only doing a preshow mirror check. But look, I am washing my hands right now so you can retweet that I wash my darn hands."

I stood there as the stalls opened up and my heroes Peyton and Eli Manning appeared along with the incredible Aaron Rodgers, quarterback of the Green Bay Packers. Peyton, maybe the nicest guy in all of sports, looked at me like I'd lost my mind, but then either out of pure compassion or the fact that people tweet crazy stuff about him once in a while, Peyton says: "OK, guys. We all saw that Tom just washed his hands so please tweet the good news and everyone can get on with their lives." Thanks to Peyton, the culprit not only retweeted that I wash my hands in the bathroom but took down his original tweet.

My show went well that night, and life continues to be good, with plenty of work and an amazing wife and our little boy. But sometimes I get the shivers thinking of what could have been — the potential domino effect of bad stuff that one tweet about me being unsanitary might have caused — and I stop what I'm doing, and with a heart full of gratitude, I wash my hands one more time.

Tom Arnold can be seen in the upcoming Yahoo! series Sin City Saints.