Join us at 7 p.m. ET as experts answer your questions about the coronavirus delta variant, boosters and self-care. Find out more.

Brad Garrett's comedy lesson from "Ol' Blue Eyes" Frank Sinatra: Be careful whom and how you kid.

A month after Brad Garrett appeared in Las Vegas with Frank Sinatra, he opened for the singer in Atlantic City, N.J.

I hit the stage right at nine and might as well have been invisible. There was a couple so drunk in the front row that they got up and started slow-dancing during my act as the guy sang "The Lady Is a Tramp" to his date.

The guy was in a top hat and tails, holding a cane and wearing dark shades. I called him "Mr. Peanut." His lady had a scary perm that shot out in all directions. "Next time," I told her, "tease your hair. Don't piss it off." The folks around them were not laughing.

Just then from the audience, a large fella with no neck yelled, "Where's Frank?"

That caused another inquiry: "Where's the comic?"

Now the crowd was getting bigger laughs than I was. I wanted to die. And I got my wish. But before leaving, I did one ad-lib just for me.

I said, "You've been very … lifelike. Thank you. And stick around for Frank!" As I passed "Mr. S." — Frank Sinatra — he whispered to [his road manager], "Find out what that means."

It was a harmless inside joke. But some of the crew didn't agree. 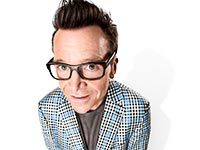 As I sat in my dressing room, there came a knock at the door. It was Sinatra's pal Jilly Rizzo and an enormous guy named Mike. "Hey, guys. Come in, please," I said.

"How'd it go out there tonight, Brad?" Jilly asked.

"Tight," I said with a chuckle. Stares.

Now it was really quiet.

"Thank you. Appreciate it."

"One question, though. What did you mean when you said, 'Stick around for Frank'?"

"Oh, that? That was a silly joke. It meant nothing."

"Well, it musta meant somethin'. It was the last thing you said, right?" Jilly questioned.

"Correct" fell from my mouth. More uncomfortable bewilderment from guys I pictured dismembering me in my sleep.

"But they're here to see Frank," Jilly said.

"Exactly. Of course. And therein lies the joke," I stammered.

"Stick around for Frank!" I tried again.

"I was making fun of myself. 'Stick around for Frank!' You know? He's comin' out!" Still nothing.

"But they're already here. Where are they going? They came to see Frank. Why do they need to stick around for him?"

"And that's why it's funny! They don't!" I pleaded as I prayed for a sudden stroke. They weren't getting it. It wouldn't go away. The room was getting smaller.

"Were you making fun that Frank is sometimes late to a show, like 'Stick around for Frank,' as in 'He'll be here soon, don't leave' kind of thing?"

Just then Jilly looked to Mike, the sleeping mountain, and asked him, "What did you hear, Mike?"

And in broken human, he replied, "I thought I heard 'Stick it to Frank.' "

Now I was envisioning being crammed into the trunk of a Lincoln. "Wha? No! Never would I say 'Stick it to Frank' ! "

Jilly held up his giant mitt. "Let's just forget it."

"Okay, good. Mr. S. invited you for Chinese after the show. Small group. Downstairs. You know where I mean?"

I did. And it was wonderful. I dined with a king and his court, and the jester ate his Kung Pao pork and didn't say a word for the rest of the night.

Turns out "Mr. Peanut" was John Gotti. Apparently I have nine lives.

Copyright © 2015 by Brad Garrett. From When the Balls Drop: How I Learned to Get Real and Embrace Life's Second Half by Brad Garrett (Gallery Books, a Division of Simon & Schuster, Inc.). Printed by permission.