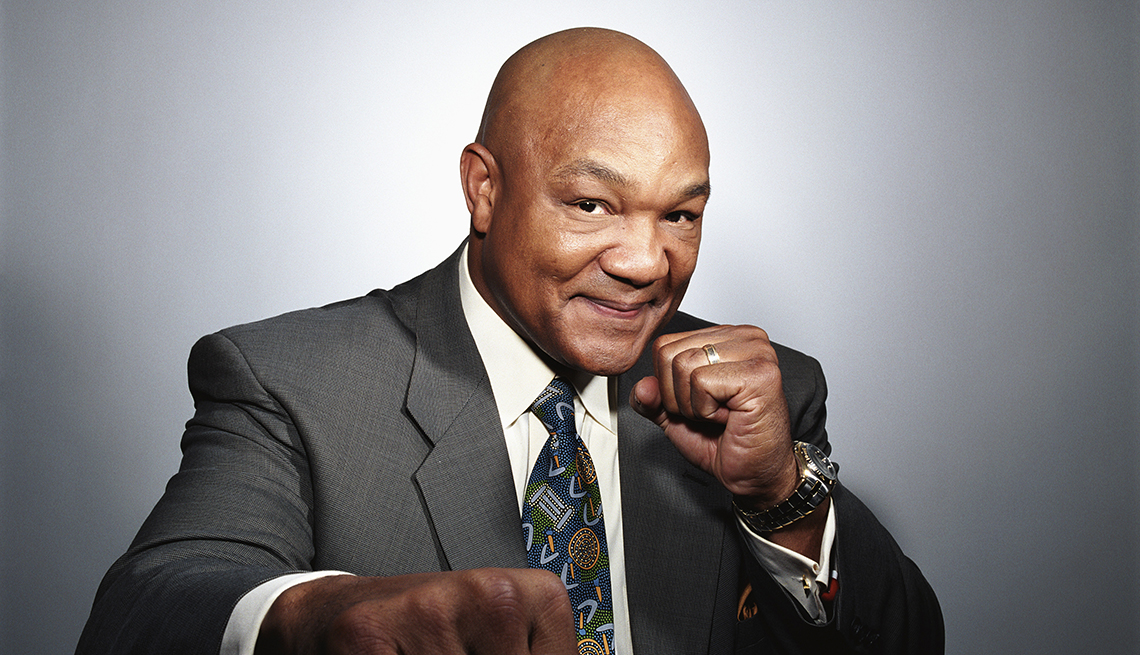 The former two-time world heavyweight champion, and one of America's most popular and successful pitchmen, talked to Jon Saraceno for the Bulletin about living well as a senior and his respect and fondness for Muhammad Ali.

What was the best thing about turning 65 earlier this year?

It's strange. I was in the hospital with a back operation. What's that thing — Medicare? Man, I didn't have to pay for anything! [But] you have to live to see it. Sixty-five? It's like gold sprinkling from the sky.

How did you celebrate?

I only had to blow out one little candle. Deep breath — boom! There it went. All of the kids came over. I have 10 grandkids, including two great-grandkids. Make that 11 — they snuck one in on me. You watch them crawl around the floor, trying to talk, behavin' and misbehavin'. Then I realized I only could have seen this had I made 65.

As we age, how important is a good attitude?

That is the only thing that pulls you through. If you can't stay positive, you will fade away. I am a hypochondriac — I am always in the doctor's office. If you don't laugh about that, you go crazy. I take a cry like everyone else now and then. But as soon as I am finished wiping away the tears, it is back to being the joker again.

A good book. Writers make me cry. I love reading.

Twenty years ago you reclaimed the heavyweight title at a record 45 years old. How did it change your life?

It didn't really make a big dent in my psyche because I was almost expecting it. So I went back to preaching and my corporate obligations. About a year ago, Michael Moorer [the man Foreman knocked out in 1994 in Las Vegas] was in church with me. His friendship was more important than talking about that victory.

Incredibly, you fought until you were 48. Any advice for us mere mortals when it comes to maintaining good health?

I love to eat. But I cannot face food without using my exercise equipment. I worked out this morning — I thought I was going to pass out. My trainer said, "Man, do you know how not to work out hard?" I never fell in love with exercise, but you have to do it for the rest of your life. I did it to become champ, and now I do it to stay alive. It is a death sentence without it.

How is your health?

Good. I've had about four knee operations. Other than my right knee, I can probably kick somebody like Bruce Lee with my left knee. If I jump up and fall on them, I probably will do more damage — to them.

You give a touching tribute to Muhammad Ali on your website. Have your feelings toward him changed over time?

As the years have gone by, I [realize] he is one of the greatest men I ever have met. He's too big to [merely] categorize as the greatest boxer. That makes him small. Each year that goes by, his life means more to me.

You are back on television endorsing a company called InventHelp. What is that all about?

People think I invented the George Foreman Grill. Not really. People would ask me, "George, can you help me [with my invention]?" Now I point them to someone who can really package their deal.

Estimates are that you earned in excess of $200 million on the grill. True?

Much more. There were months I was being paid $8 million per month.

What is your secret to being a successful corporate pitchman?

When that camera hits you, it's not about how good you look. People look for honesty. You sell yourself; the product almost is secondary. [Initially] I didn't want to do commercials. Bill Cosby told me, "You're just like anyone else — we would all like to be on television. Enjoy it. If you don't want to do it, send them to me and I'll do it!"

Jon Saraceno is a freelance journalist who covered boxing for USA Today for many years.