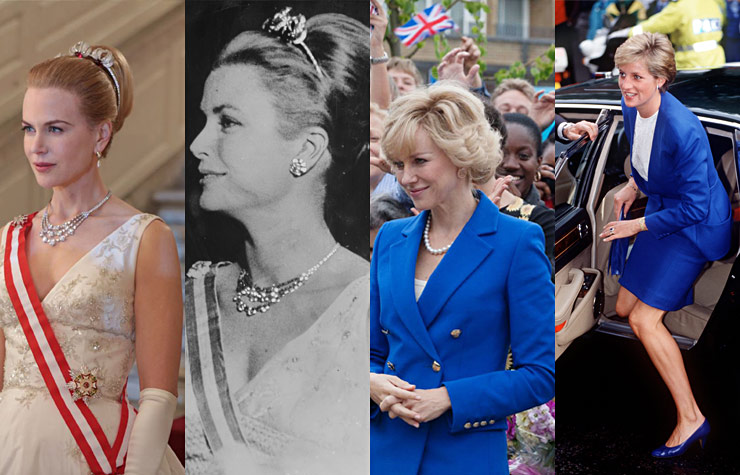 Grace Kelly was known as America's Princess, a glamorous movie star and the ultimate Hitchcock blonde who fled the Hollywood spotlight at the height of her fame to wed European royalty, Prince Rainier of Monaco. Diana Spencer was declared the People's Princess, a shy British beauty who came from aristocratic stock and fulfilled the fairy-tale fantasies of a nation by marrying Prince Charles.

Long after their tragic deaths, both women have a special place in the hearts of many — as evidenced by a pair of biopics expected in theaters within months of each other. Naomi Watts stars in Diana (opening in the U.S. on Nov. 1), while Nicole Kidman takes the lead in Grace of Monaco (moved out of the holiday lineup to open in early spring).

The fact that the two Australian actresses playing Princess Diana and Princess Grace are best friends in real life is just one of several bonds that tie these legendary women together.

Grace Kelly was born Nov. 12, 1929, to a wealthy family and hung out with the high society crowd.

Diana Spencer was born July 1, 1961, already bearing a royal lineage as a member of one of Britain's oldest families.

Grace was the daughter of Jack Kelly, an Olympic gold medalist in rowing, a business mogul and a politician, who favored her older sister and brother while disapproving of her acting ambitions.

Diana was the fourth child of John Spencer, Viscount Althorp. Her parents had hoped for a male heir — an infant brother, John, had died a year before — and her arrival was said to have put a strain on the marriage. 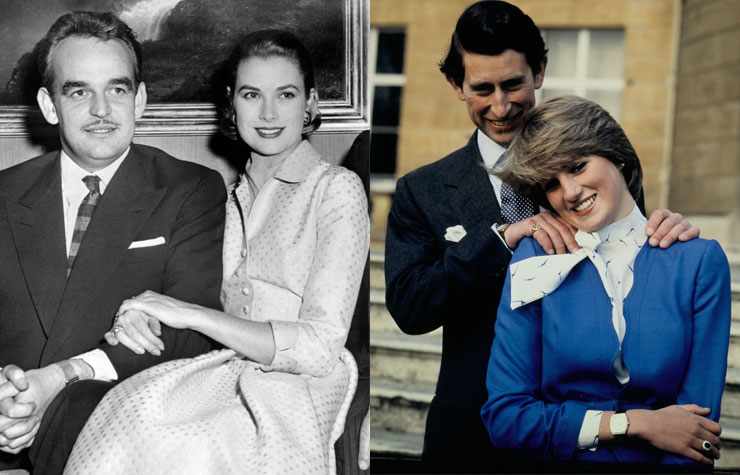 Grace found her calling onstage at age 12 and attended the American Academy of Dramatic Arts in New York. Her father caused her to split with first beau, a Navy man, and Kelly engaged in a string of romances with older suitors — including affairs with nearly all her big-screen leading men, starting with Gary Cooper in High Noon and ending with Bing Crosby in High Society.

Diana was considered a mediocre student who loved the arts, exhibited community spirit and enjoyed working with children. After attending a Swiss finishing school, she worked as a nursery assistant, a helper at a preschool, a nanny for an American family living in London and a kindergarten teacher.

After 11 films, including a 1954 Oscar-winning turn as Bing Crosby's dowdy spouse in The Country Wife, Kelly met the 31-year-old Prince Rainier III of Monaco while doing a photo shoot at his palace in 1955. They began exchanging letters and Rainier, who was under pressure to produce an heir, went to America in December of that year to meet her family. He proposed three days later.

Prince Charles had been seeing Diana's older sister, Lady Sarah, but began to focus on Diana after they both were guests at a country getaway in 1980. That led to a sailing weekend on a yacht and an invitation to Balmoral, the royal family's Scottish residence, to meet Charles' family. After a courtship in London, the prince, 34, proposed on Feb. 6, 1981 — although the engagement was kept secret for several weeks.

Grace's ring was originally a tasteful Cartier eternity band of rubies and diamonds. But after checking out the rock candy on the fingers of other Hollywood ladies, the prince upgraded to a 10.5-carat emerald-cut diamond nestled between two baguettes, also made by Cartier. Grace wore it in the final film she shot, High Society.

Diana's ring featured 14 solitaire diamonds circling a 12-carat oval blue Ceylon sapphire set in 18-karat white gold, which resembled her mother's engagement ring. The piece was made by Garrard, then the crown jewelers, and the design was later available in the company's catalog. 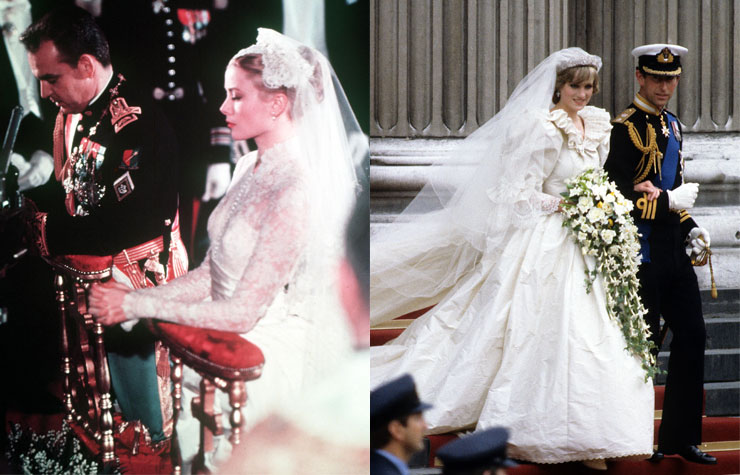 Weddings of the Century

Just 26, Grace sailed to Monaco from New York aboard the SS Constitution on April 4, 1956, with thousands of fans lining the streets for both the send-off and the arrival. A civil wedding took place on April 18 at Rainier's palace and a religious wedding was celebrated at Monaco's St. Nicholas Cathedral the next day, attended by 600 guests and watched on TV by about 30 million people.

The Prince of Wales and Lady Diana were married on July 29, 1981, at St. Paul's Cathedral in London instead of the traditional Westminster Abbey, to allow for more seating. The event was watched by a global TV audience of 750 million, while an estimated 600,000 people lined the route taken by Diana's carriage.

For the religious ceremony, Grace wore a dress designed by MGM costumer Helen Rose, with a high neck and long sleeves as well as a form-fitting torso and flowing skirt. It contained, according to reports, 25 yards of silk taffeta, 100 yards of silk net, peau de soie, tulle and 125-year-old Brussels rose point lace. The 90-yard veil, attached to a Juliet cap, was made of tulle. The cost at the time: $7,267. The gown is said to have inspired the one worn by Kate Middleton for her wedding to Prince William in 2011.

Diana's dramatic ivory silk taffeta and antique lace gown with its 25-foot train cost $14,580 ($43,744 in today's dollars). Designed by David and Elizabeth Emanuel, it featured large puffed sleeves and a billowing skirt, and was decorated with hand embroidery, sequins and 10,000 pearls. Knockoffs were available just hours after the ceremony.

1954: Grace Kelly in a publicity still from the movie "Rear Window." 1996: Princess Diana dressed to impress at a benefit ball in Australia.
Moviepix/Getty Images and Julian Parker/UK Press/Getty Images 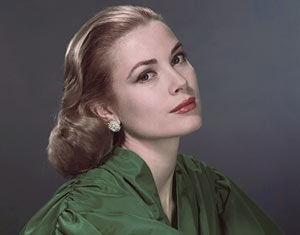 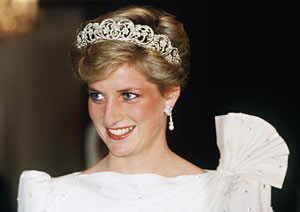 Grace exuded a cool elegance, prim, polished and poised — the sort of look that Betty Draper aspires to on TV's Mad Men. 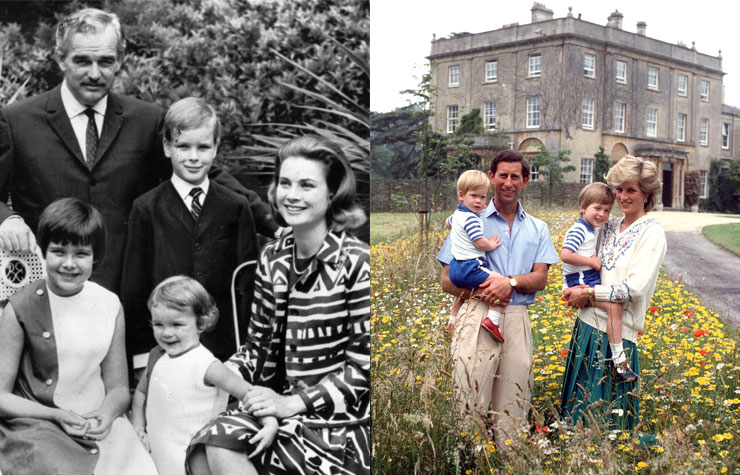 Diana's schoolgirl chic soon evolved into a sophisticated yet still youthful sense of style, even when donning a matching suit and hat for her royal duties and appearances.

In the 1980s, Diana was fond of gowns that featured the big-shouldered look favored by the cast of TV's Dynasty. But by the '90s, her leaner, more mature figure benefited from sleek, one-shoulder formal wear.

Rainier proved almost as controlling as Grace's father, banning her movies from being shown in Monaco. When asked by the director in 1962, he was willing to allow his wife to star in Alfred Hitchcock's Marnie. But Monaco's citizenry didn't want to witness their princess kissing another man on the big screen and she dropped out. He later refused to allow her to do the 1977 ballet drama The Turning Point. Biographers have suggested that both spouses sought out affairs as their union cooled.

Both Diana and Charles found comfort in the company of others as early as 1985, she with Maj. James Hewitt and he with ex-girlfriend Camilla Parker Bowles. Tapes were leaked with the royals engaging in intimate conversation with their paramours in 1992. The pair separated in January 1993 and Diana announced she would withdraw from public life. More details of the troubled union emerged in ensuing years, and a divorce was issued on Aug. 28, 1996. 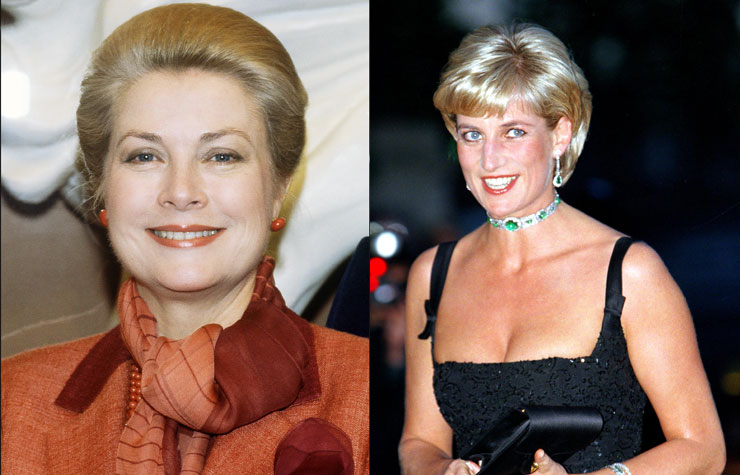 After suffering a stroke, Princess Grace drove off a winding road leading from France to Monaco and her car fell down a steep mountainside on Sept. 13, 1982. Daughter Stephanie, a passenger in the car, escaped with relatively minor injuries, but her mother never gained consciousness and died the next day at age 52.

While being pursued by paparazzi, Diana, along with companion Dodi Fayed and driver Henri Paul, suffered fatal injuries after a car crash in the Pont de l'Alma road tunnel in Paris on Aug. 31, 1997. She was 36.

Kelly and costar Bing Crosby introduced the popular Cole Porter tune "True Love" ("While I give to you and you give to me/ True love, true love") in the movie musical High Society. The song reached No. 4 on the charts and resulted in a gold record.

Elton John performed new lyrics to "Candle in the Wind," his 1973 hit about Marilyn Monroe, as a funeral tribute to Diana. The opening line was changed to "Goodbye England's rose, may you ever grow in our hearts."

It's a Boy! Diana's Grandson Makes His Entrance

A look back at the princess's lifelong love of children 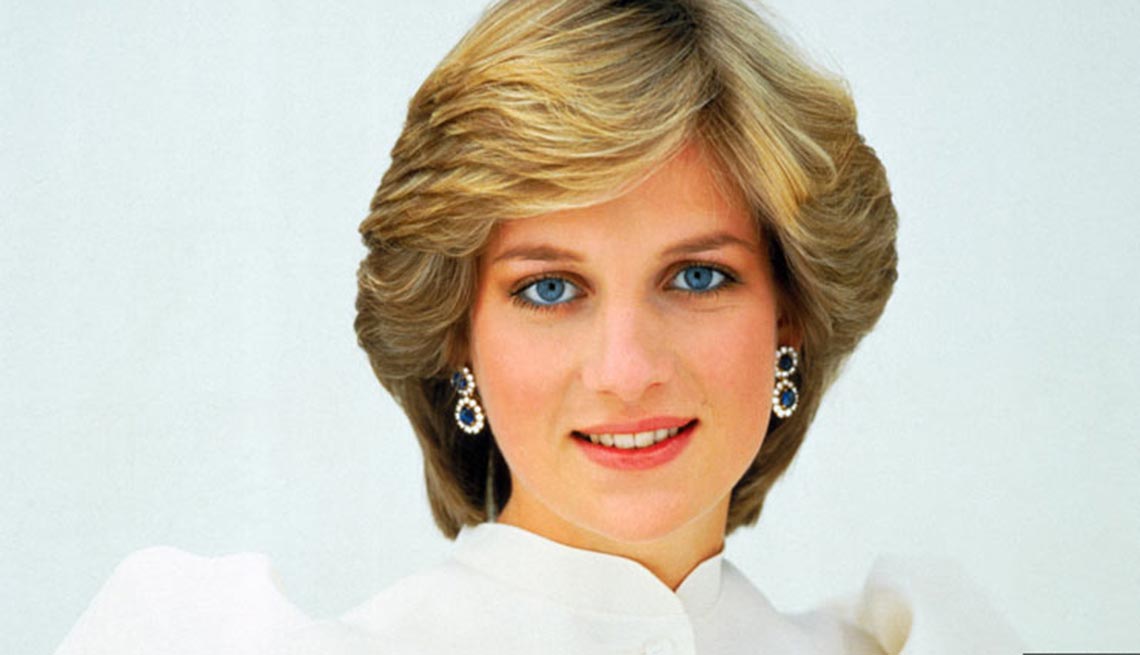 A look back at the princess we loved, and still miss.