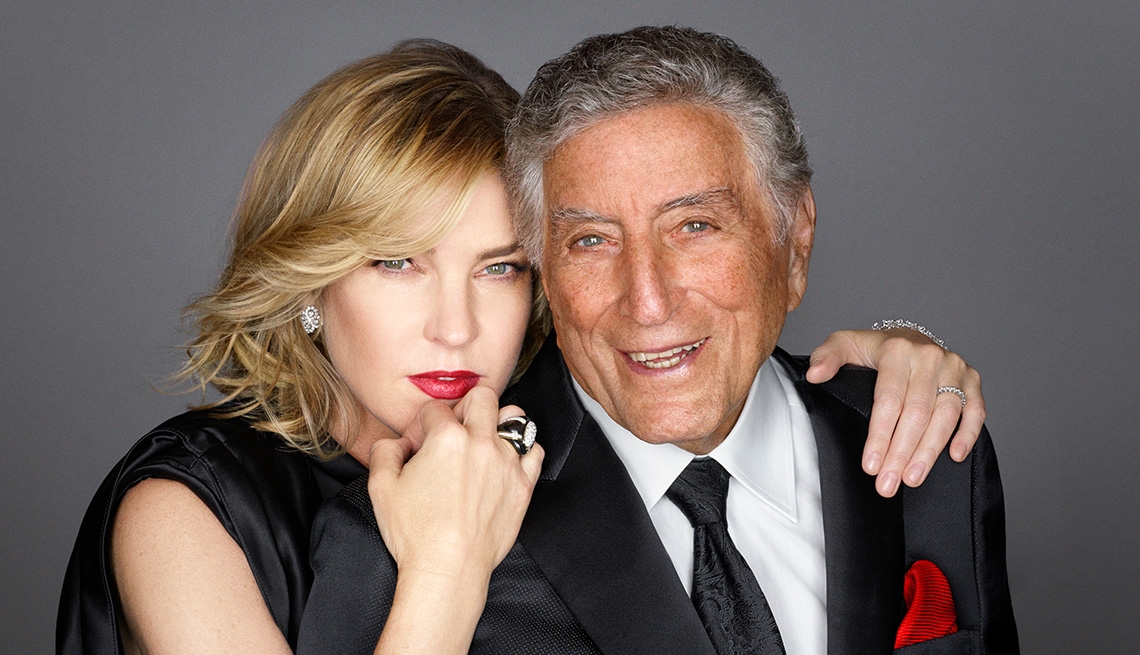 When two jazz superstars team up on a selection of Gershwin tunes, the result is bound to be “’S Wonderful.” And 11 other classy interpretations.

Veteran crooner Tony Bennett and contemporary chanteuse Diana Krall, friends for 20 years, have cherry-picked the George and Ira Gershwin catalog for Love Is Here to Stay, out Sept. 14 on Verve. The set arrives just ahead of the 120th anniversary of George Gershwin’s birth on Sept. 26.

The two toured together in 2000 and linked voices on a pair of Bennett's earlier releases, but this is their first full-length album collaboration.

“The first time I met Diana was at the Montreal Jazz Festival,” Bennett recalls in an email conversation. “She was just starting to get noticed, and I was so impressed that I asked her to play piano on a song during my set, which happened to be Gershwin’s classic, “They Can’t Take That Away From Me.” So it’s pretty remarkable that over 20 years have passed and all the while we remained good friends and she has just perfected her talents. And now on this new album we are singing that very same song together.”

Paying homage to the Gershwins, a staple in his hefty catalog, was an easy call. “The music of the Gershwins is all-American,” he says. “They captured the spirit of this country, its vitality and flair and uniqueness, and that still shows through in their lyrics and music decades later.”

The Gershwin theme was Bennett’s idea, and Krall was all in.

“I followed his lead of choosing material,” Krall says, also in an email interview. “Because it was Gershwin, it was harder to narrow choices down to just one album as there are so many great songs to choose from. I think what we have is wonderful.

“Tony and I have such musical ease together. Being with him is always fun. I listen so closely to what he is doing so it becomes natural, like a conversation. And of course he makes my life so glamorous you cannot blame me for being amorous!”

"My One and Only” and “I’ve Got a Crush on You” are the only tracks that were never recorded previously by either artist.

Bennett and Krall submit a lively, sophisticated update of “Fascinating Rhythm,” a Bennett favorite. It was his first physical record, released in 1949 on Leslie Records under his stage name Joe Bari.

Bennett recalls, “A wonderful jazz historian, George Simon, who at the time was editor of Metronome magazine, had started a record label and offered me the opportunity to make my first actual recording. The record’s A side was a song called “Vieni Qui” that didn’t go too far, but on the B side I chose “Fascinating Rhythm,” since I knew you can’t go wrong with Gershwin.

“So it was a lucky charm that has followed me through my career. It was thought that all the copies of the record were destroyed. During my 90th birthday year, a copy of it was found, so my sons framed it and gave it to me. It’s by the piano in my apartment.”

He recorded title track “Love Is Here to Stay” for three earlier albums and didn’t hesitate to revive it again.

“It’s truly a perfect pairing of melody and lyrics, and you can feel it when you communicate the song to an audience,” Bennett says. “The Gershwins crafted that song so well that it is effortless to sing. And that is the sign of true genius — when you do something very difficult and make it look easy.”

Bennett, who turned 92 on Aug. 3, became the oldest living artist to top the Billboard chart with the release of Duets II in 2011. He was 85. At age 88, he extended that record with No. 1 album Cheek to Cheek, his collaboration with Lady Gaga. He could hit a triple.

Krall is the only jazz artist to rack up eight No. 1 debuts on Billboard’s jazz album chart. She has two Grammys to Bennett’s 20, but at 53, she’s got decades to catch up. When her first album was released, Bennett had been singing professionally for nearly 50 years.

“I’m still learning from him,” says Krall, whose latest album, standards collection Turn Up the Quiet, reflects her devotion to jazz roots and pioneers.

“When you get the chance to work with people like Tony Bennett, who were and continue to be part of creating a unique style and art form, you thrill at the chance,” she says. “You carefully listen, watch, learn and experience how it feels to be so close to that person singing next to you. That voice you have known since you were born. You get all overwhelmed, excited and dizzy like your springs are all going to pop, and then you take a deep breath, step back and just sing and love every minute of it.”

“I felt the same way playing piano for Paul McCartney,” she says. “He, like Tony, makes everyone just feel so comfortable and relaxed. You find yourself having as much fun as you ever dreamed you would.”

The years have affected Bennett's voice, which has deepened from tenor to baritone in recent years.

“Singing is a physical activity so over time you need to make adjustments,” he says. “But the reason you sing a song differently has more to do with maturing as an artist — communicating better with an audience, understanding the meaning of a song more deeply. I have lived longer so I have learned more, experienced more, and that impacts everything, especially on the creative side with performing.”

Bennett hasn’t mapped out his next recording project, but he plans to stick around. How does he want to celebrate his 100th birthday?

“I would love to be on stage, singing the songs that I love from the Great American Songbook and making people feel good,” he says. “That’s really what it’s all about for me — entertaining an audience so when they walk out of the theater that night, they say, ‘I really enjoyed myself.’ That makes me feel good.”