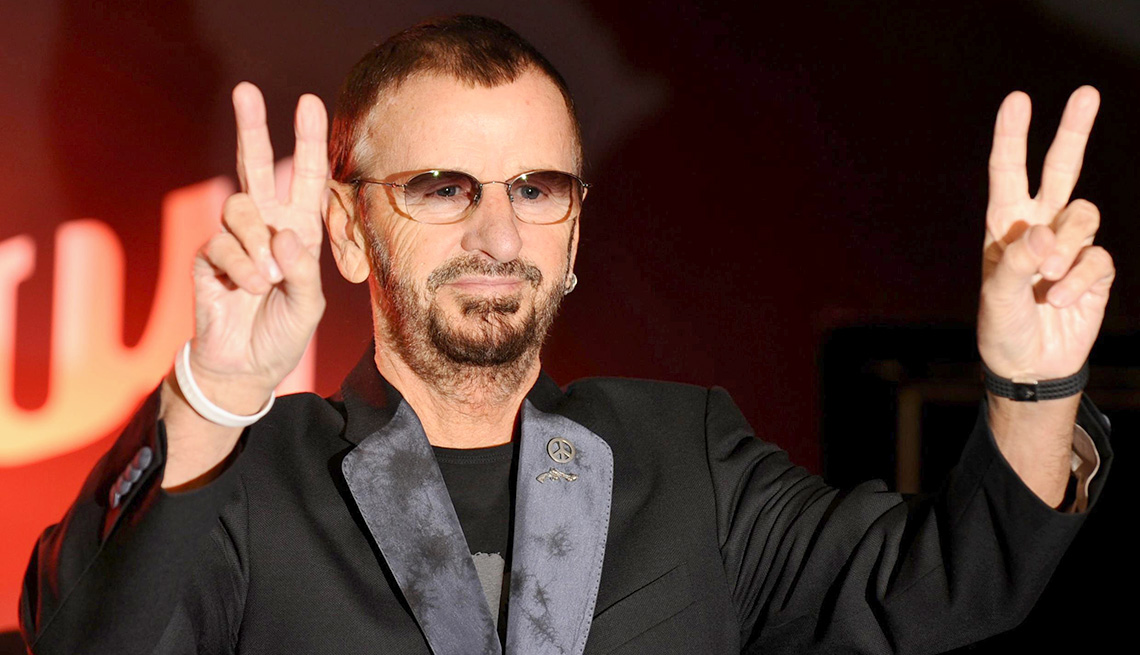 Ringo Starr, 77, recorded his new album, "Give More Love," in his living room.

The spotlight on Ringo Starr burned brightest during the Beatles’ eight-year run, but that wasn’t the whole show. The storied drummer is in the 47th year of an upbeat encore.

He’s set to release Give More Love, his 19th solo album, on Sept. 15. And he’ll hit the road in October, starting with an eight-night stand in Las Vegas, backed by the All-Starr Band lineup he’s toured with since 2012. Starr has led a dozen variations of the group since it debuted in 1989.

At 77, why is he still thumping snares instead of sunbathing in Fiji?

Starr crafted Give More Love with a little help from his friends, including Paul McCartney, Dave Stewart, Peter Frampton, Richard Marx and brother-in-law Joe Walsh. Initially, he planned to make a country album, akin to 1970’s Beaucoups of Blues, with Stewart as producer. His tour schedule wouldn’t permit a long detour to Nashville, so Starr wound up recording a rock-centric collection in his Los Angeles living room.

After last year’s tour, he pledged to stay off the road in 2017 to concentrate on recording.

“That lasted until the 12th of January, when I decided that I’d like to go on tour in October,” says Starr, parked on a couch in his Beverly Hills hotel suite. He’s slim and natty in a black jacket, jeans and sneakers, sporting earrings and a trim beard. “January, February, March ... I worked solid on the record with some of my best pals. I love to collaborate. I love hanging out with writers and musicians.”

Topping that list was Beatles bandmate McCartney, whom Starr summoned to play bass on "Show Me the Way," a plaintive love song. McCartney also contributed to a raucous rocker, "We’re on the Road Again," the song most likely to be added to the All-Starr set list. 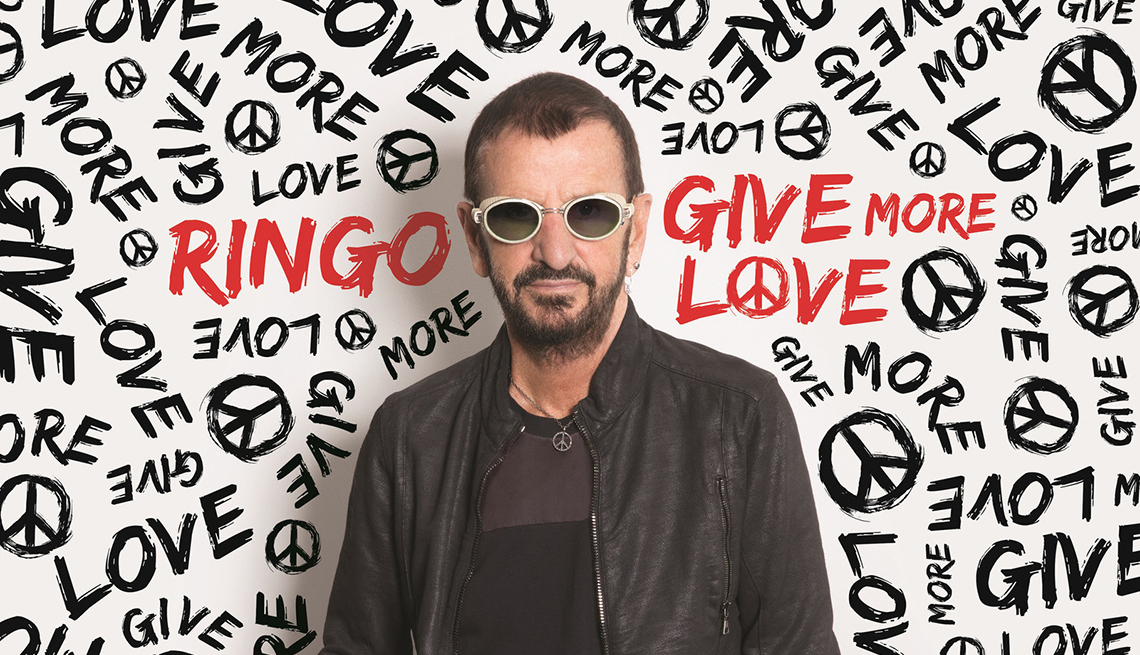 Give More Love’s 10 originals hold a mirror to Starr’s history, love life and philosophy, yet he insists the album was not intended as a personal statement. “I don’t do that,” he says. “I just start and see where it goes. If I’m writing with someone, I’m directing it. And I always direct it to peace and love. I had a discussion with one of the writers [Frampton] about politics, but I didn’t want to go in that direction, to get into specifics.”

"Electricity" pays homage to the late Johnny Guitar, Starr’s bandmate in the pre-Beatles Liverpool group Rory Storm and the Hurricanes. The Hurricanes enjoyed modest fame playing skiffle and rock 'n’ roll until McCartney and John Lennon persuaded Starr to replace Pete Best in the Beatles in 1962.

“I just wanted to give Johnny Guitar a shout-out,” Starr says about "Electricity," which he cowrote with Glen Ballard. “I loved him, and he was great to be with and to play with. When we were lads in Liverpool, we went to play at the Cabin Club, and he brought a radio because it had a speaker you could plug into. He plugged in, and we were thrown off the stage. It was a folk club, and we were trying to rock it up.”

Starr is still rocking it up on "Speed of Sound" and "Shake It Up," two tracks that showcase his undiminished drumming skills. “I wanted 'Shake It Up' to be like ’50s rock, like 'At the Hop,'" Starr says, referring to Danny and the Juniors' 1957 rocking doo-wop hit inspired by high school sock hops. “I was never at the hop, obviously. I’ve seen it in movies. They’re all in white coats. The hop is very nice, and then Elvis comes along and changes things.”

Starr penned the romantic tunes "Show Me the Way" and "King of the Kingdom" for actress Barbara Bach, his wife since 1981. “I surprised her with these songs,” he says. “We have held hands for 37 years. You can’t say every day is filled with joy because we’re human beings, and sometimes we have a row. But to me, she is the king of the kingdom.”

Finally, there are the songs, such as "Get More Love" and "Standing Still," that reflect Starr’s mantra of "peace and love." On July 7, his 77th birthday, he hosted his 10th annual “Peace & Love” celebration, the third at Hollywood’s Capitol Records, where he led a group of fans in flashing the peace sign and chanting “peace and love.”

The tradition started in 2008 after Starr said he wanted “more peace and love” for his birthday. He summoned fans around the globe to pronounce the phrase at noon on his birthday. He’s confident the small gesture can snowball into measurable change.

“I truly believe it,” he says. “It’s in me, the dream that for one minute everyone on the planet will say 'peace and love,' on the bus, in the factory, in the office. You never know, maybe it will happen. I’m going to keep doing it. I just push that forward all the time. It’s getting picked up more and more.

Starr says he attempts to live by his doctrine, but slips from time to time. “There are days in my life when Barbara and I are at loggerheads. We’re not saints. But overall, I live a good life in a great space.”

While his solo career takes up a good chunk of that space, the Beatles heavy reissue schedule keeps him busy, too.

“It blows me away that it’s all still coming out,” he says. “Back then, we all put a five-year limit on it. We were punks, just lads. We couldn’t think, Wow, in 50 years they’ll still be playing us. This year’s 50th anniversary edition of Sgt. Pepper’s Lonely Hearts Club Band is still relevant. It still sounds great. And the drums are incredible!”

Starr has been playing for 64 years. “I love the rhythm patterns. I’m a steady drummer, but sometimes I get fed up with my fills,” he says. “I tell myself, I’ve heard that fill. Didn’t I do that in 1982? I’m out of fills! [Laughs.] Then I get over myself. I cannot do any fill exactly the same way twice.”

Though he’d rather forge ahead than reflect on his past, he says Eight Days a Week, Ron Howard’s 2016 documentary on the Beatles’ touring years, moved him.

“I loved it,” Starr says. “It was so emotional to see it on screen. The screaming became a part of our lives. We might as well have not bothered with speakers. There were such crazy moments in our Beatles life. There were two cops in Dallas who had this attitude that kids in their city weren’t like the rest. But those kids were on the wings of the plane as we were coming to a stop.”

Is there any nugget of Beatles lore that hasn’t been unearthed by researchers?

“No,” Starr says flatly. Then he adds with a grin, “I’m down to spreading rumors now.”