I was in the third grade when I bought my first 45 — "Strawberry Fields Forever," with "Penny Lane" on the flip side. It cost 50 cents at a J.M. Fields department store in North Carolina. I dropped the needle and was transported to another world. I decided to stop eating lunch, saving my money so I could buy records. Music was more important than food. All these years later, I am still skinny, and I'm still collecting records.

When I was 17, I got my first job in a record store called Schoolkids, and I worked in record stores throughout my years at Appalachian State. I was an aspiring guitar player, and record stores were a place for people like me, who needed to earn some cash while trying to make it as artists. My band, called Three Hits, toured the Southeast, and it was wildly fun. Back then, everything was about getting on MTV, so we shot a video on the beach and took it to New York. For a moment, we made it on MTV. But I got tired of being broke, so I went back to working in record stores.

The 1990s were an exciting time. CDs, vinyl, cassettes — people couldn't get enough music. In 1995 I helped form a coalition of independent shops, called the Department of Record Stores. That was my job — promoting record stores — and I loved it.

In 2007 a perfect storm threatened to shutter the record business. The digitization of music, the economic downturn, the inexplicable notion among millennials that their music should be free — it was ugly. When Tower Records closed its U.S. stores in 2006, it felt like our industry was gasping its last breath.

I had to do something. Record stores offered that magical experience we had all grown up with: cracking open a new LP, pulling out a poster, reading lyrics and sharing music. I had an epiphany, shared among some friends. We came up with Record Store Day. The idea was to get stores and artists to participate in a one-day event by creating unique pieces of music on vinyl — and throwing in-store parties.

When I met with label executives, most of them laughed. The idea that we were going to relaunch vinyl records in 2008 seemed ridiculous. Then I met with the president of Warner Bros. I gave him my pitch, and he said, "That's a cool idea. Let's do it. In fact, let's do it with Metallica." And for that first Record Store Day (April 19, 2008), the band re-released two albums on vinyl. People stood in line for days to see Metallica make an appearance at Rasputin Music in Mountain View, Calif. We had about 80 stores involved the first year, and we sold all 25,000 records we pressed. 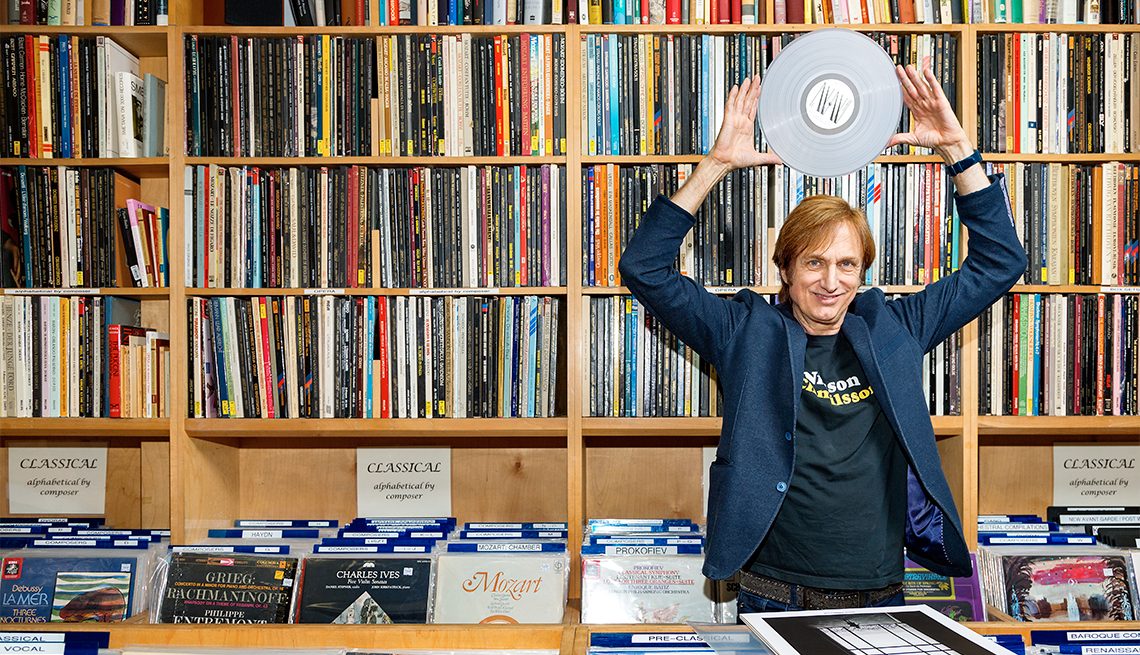 We were on to something.

Since 2008, we have pressed records for Record Store Day with Paul McCartney, Bruce Springsteen, U2, Chuck D and others. When I lived in L.A., I was lucky enough to meet John Densmore, the drummer for the Doors — my childhood heroes. We became friends, and he released a best-selling book, The Doors: Unhinged, for Record Store Day in 2013.

On April 22, Record Store Day will be celebrated in some 3,000 independent stores around the world (go to recordstoreday.com for information). The event has helped fuel a new vinyl craze; U.S. vinyl sales hit a 27-year high in 2015. Go to an electronics store and you'll see shiny turntables for sale. That would have been unheard of in 2007.

For me, something extra special will happen on April 22. Among about 300 different records that will go on sale will be "Strawberry Fields Forever," rereleased for the single's 50th anniversary — the same single I bought when I was 9. I still have my original.

I like to spend Record Store Day with friends, buying records like other fans. If you don't live near a record store, I'll bet you have a box of old records sitting in your attic or garage. Pull them out on April 22. Drop the needle and dive into those memories.