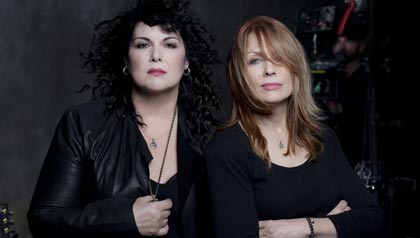 Led by the Wilson sisters, Ann and Nancy, Heart was a sort of American Led Zeppelin, equally adept at gorgeous ballads like "Dog and Butterfly" or "These Dreams" and gut-crunching rock like "Barracuda" and "Magic Man." Unlike so many other bands that formed during the 1970s, though, Heart nimbly adapted to the MTV video revolution in the '80s. Now the band is back with a new album, Fanatic, and selling out shows to fans both long-time and brand new. We asked Nancy Wilson to talk about the sisters' new album — and about their new book, Kicking and Dreaming: A Story of Heart, Soul, and Rock and Roll (It Books). But first ... click "play" below to listen to an exclusive track from their new album.

Is that a mandolin we hear in the song "Million Miles"?

There's a little mandolin, and there's a little fiddle hidden in there, but mostly it's the guitar magic of Ben Mink, our producer, who knows how to tape things. I think it's the most looped, constructed-sounding thing on the whole album — basically a lot of cool trickery.

They come out in the summertime and ride the tour buses with us. While Ann and I go out on stage to do a sound check, or get our hair and makeup ready backstage, the boys will go see a movie or hit a museum, then come watch the show.

Do you introduce your kids to certain music?

I play a lot of classical music around the house. When the Beatles Rock Band video game came along, they learned all the songs. They'd wake up the next morning singing "Nowhere Man," and I was like, "Thank you, modern technology!" Now they're discovering their own music.

I decided not to push music on them. They're both naturals at music, but I want it to be an organic outgrowth. In fact when people ask me what advice I'd give aspiring musicians, I usually say, "Turn back before it's too late!"

Has your approach to melody and harmony changed over the years?

What I learned scoring films [Jerry Maguire, Almost Famous and Vanilla Sky, all written and directed by Wilson's ex-husband, Cameron Crowe] was invaluable. As a songwriter, simplicity — what not to do, what not to play — can be the hardest thing to achieve.

I think you have to take all the colors in the palette of your life and make one great painting while you still can. Try not to keep finishing it — just let it be finished.

Do you discipline yourself to write every day? Or just wait for the muse to strike?

Our lives are so chaotic that it's situational for both Ann and me. We're working moms — our business trips just happen to be rock tours — so there's no way to approach songwriting methodically. It's really just a matter of keeping your ears (and your soul, your heart, your mind and your eyes) open for the muse. If the muse floats into your space, you stop whatever you're doing and write it down.

You and Ann have an upcoming book, "Kicking and Dreaming."

It's very exciting. Our coauthor [Charles R. Cross] interviewed us individually and together for more than a year. We also sat down with our sister Lynn and talked a lot as three sisters together. We even went into the studio and recorded the story as an audiobook. Both looking back and projecting into the future, it's been a big year for us!

Artists that broke in during the 1970s have watched their audiences gray over the years, but Heart seems to attract a younger crowd, too. Have you noticed that?

Yeah — and it's cool that it's happening to us. Ever since Carrie Underwood sang "Alone" on American Idol and [the video game] Guitar Hero featured "Barracuda," younger and younger kids have been coming to our shows. When a song takes on a life of its own like that, it's the ultimate compliment for a songwriter: It lets you connect the dots between our generation and the next — and maybe even the next!