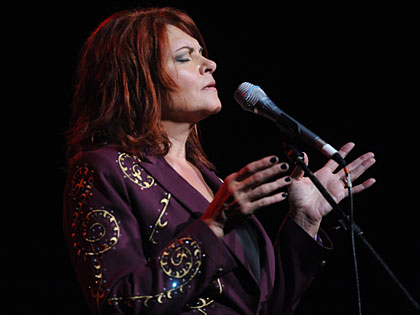 Rosanne Cash’s many admirers will not be surprised that her best-selling memoir, Composed, is written with the same grace and thoughtful insight as her songs. For more than 30 years, in such groundbreaking albums as Interiors and Black Cadillac, the 55-year-old artist has charted her personal journey and observed the world around her in acute three- or four-minute installments; it was a nice change of pace, she remarks, to stretch out in a full-length narrative.

“Songwriting is a very prescribed medium. Once you’ve set up the rules of your song, its internal structure, you’ve got to follow it. Because I’m a very structured person, that’s appealing to me and feels safe. With prose, there’s more freedom, and I enjoy the wider format.

“I feel lucky to do both,” she continues. “After I temporarily lost my voice to polyps [when she was pregnant in 1998], I started this songwriting blog for The New York Times. About 10 years ago, my editor looked at one of the essays and said, ‘Now that is the beginning of a memoir.’ I thought I was too young to write a memoir, but it took me a decade to finish, and now I’m not too young to have written a memoir!”

She believes she needed the time to be able to write about her parents so frankly — acknowledging Johnny Cash’s drug addiction and infidelities and Vivian Liberto Cash’s bitterness when their marriage broke up — and yet with loving, mature understanding.

“It took getting to maturity to develop a mature attitude,” she comments, laughing. “Also, I don’t think you can achieve any objectivity about your parents until they’re gone. You can start to see them for who they were, and you become free to relate to the best parts in them.”

Maturity also helped when she gave birth for the fourth time, she remarks. “It’s a lot easier in your 40s! In your 20s [when she had three daughters], you barely know who you are, you haven’t really separated from your own parents, you’re anxious about what you’re going to do in the world and resentful of the time babies take up. At 43, every moment was so precious. I knew how quickly it passed. I knew who I was — it was all just a gift.”

Secure in her own identity, Cash felt ready to embrace the musical heritage that had always felt a bit overpowering. Her most recent album, The List, selected 12 songs from a list of 100 essential country songs her father made for her when she was 18. It was named Album of the Year by the Americana Music Association, and Cash picked up her award on Sept. 9 at legendary Ryman Auditorium in Nashville, Tenn.

“I used to bristle at the moniker ‘country singer,’ because I never thought of myself that way,” she recalls. “I wanted to push away my father’s musical legacy as far as I could when I was young, and that was important; you have to find out who you are before you step into a legacy. I probably pushed it away a little longer than was graceful, because my father cast such an enormous shadow, but he understood that better than anyone.”

Both The List and Composed were completed in the wake of Cash’s surgery for a rare brain condition in 2007. “I’m in the green room now,” she says, referring to the place where performers wait before going onstage. “There’s no wall between me and my own mortality. Coming up against that kind of fear lent a fresh urgency to projects like making The List and finishing this book. I started thinking about separating from my kids, in a healthy way: not having those old enmeshments, not taking care of them too much when they’re adults, so they can eventually let me go with more equanimity. And I thought about what I was leaving them, not just materially but spiritually and musically.”

Yet her children will need to make their own rules, as Cash did herself. “My imprint from my mother was that being a musician was a really dangerous thing to be: Your marriage was going to break up, you were going to get addicted to drugs, you would never have a real home life. I had to shake off that teaching and realize that I could do it differently; I could do the thing she most feared and still have my home, my marriage, my children. That means everything to me.”