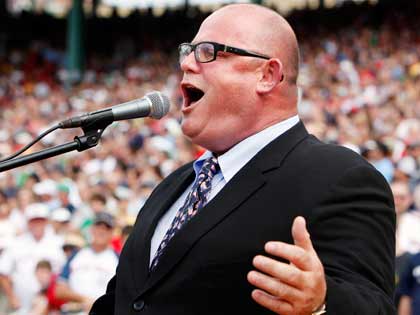 Irish Tenor Ronan Tynan sings "God Bless America" in the seventh inning of a baseball game between the Baltimore Orioles and the Boston Red Sox.

Ronan Tynan's appearance as a keynote speaker at AARP's Orlando@50+ National Event this fall is well timed, since the noted Irish tenor, physician and athlete recently turned 50 himself. Getting older can be particularly difficult for someone with a disability, he acknowledges, but it's no surprise to learn that Tynan, who had both legs amputated below the knee at age 20 and went on to win 18 gold medals at the Paralympic Games, has no intention of slowing down now.

• My Generation: Hitting the High Note

• Ronan Tynan Talks About His Career and Passions

"I have a motto: Use it, don't lose it. As your joints age, you have decreasing mobility, but you can't let this go, because if you do, your range of movement becomes less and less. I try to go to the gym at least two or three times a week, I walk a lot, and when I get the chance I swim; I keep as mobile as I possibly can. The most important thing for all of us is to stay moving."

Stay moving is a directive Tynan has followed throughout his eventful life. After his triumphs as an athlete, he went on to become the first disabled person ever admitted to Ireland's National College of Physical Education and to get a medical degree from Trinity College in Dublin. He still keeps up with medical research and will be speaking at the Mayo Clinic in Minnesota later this year about his extensive work on prosthetics.

But his medical career was sidelined when, at the age of 32, Tynan started taking voice lessons; within a year he had won the John McCormack Cup for Tenor Voice, and in 1994 he made a sensation on the televised talent show Go For It. Numerous best-selling CDs and sold-out concerts followed, both as a solo artist and as one of the popular Irish Tenors.

Tynan's new CD, All Kinds of Everything, celebrates the many facets of his musical career. There's some new material, and it includes the live recording of his 2004 performance of "Ave Maria" and "Amazing Grace" at President Ronald Reagan's funeral at the Washington National Cathedral, as well as his showstopping rendition of "Come Back to Sorrento" from 1994. "Since I came onto the music scene through Go For It, I thought it would be nice for people — and also nostalgic for me — to hear what I sounded like 16 years ago," Tynan explains. He'll be connecting with another aspect of his musical past in December, when he reunites with Anthony Kearns and Finbar Wright for an Irish Tenors Christmas tour.

A solo concert in Baltimore will be televised on PBS later this year. "What I do now in my concerts is, I try to cover every style: not just Irish songs, but contemporary material and some rock, so people can hear that I do a lot of different things." However, he adds with a laugh, he will not be covering any Metallica songs, even though he once confessed to The New York Times that the heavy-metal band was his "guilty pleasure."

Tynan recently moved to Boston after several years of living in New York, where his performances of "God Bless America" during the seventh-inning stretch at Yankee Stadium had become a cherished local tradition. Given the fierce rivalry between the Boston Red Sox and the New York Yankees, we wondered how he was received by Sox fans when he sang at Fenway Park on the Fourth of July.

"I was very welcomed," he replies. "And you know, the song I sing is 'God Bless America.' It's not about the Red Sox or the Yankees or the Cardinals; it's about this great country and praising the Man Above for giving us this great country. I love America with a passion." In fact, the Irish-born Tynan is in the process of becoming a U.S. citizen.

As if he didn't have enough on his plate, Tynan is also at work on a new book, though he won't say whether it will be a sequel to his critically praised 2001 memoir, Halfway Home. "Oh, I can't tell you what it's about!" he says, laughing.

If we had to guess, we'd venture that it won't be a memoir, simply because Tynan is not one for dwelling on the past. "You must never look behind; you must always look forward," he says. "Live life the way you want it to be. Learn from your past experiences and deal with the new events that come into your life. That's the great thing; every day greets you with something different."