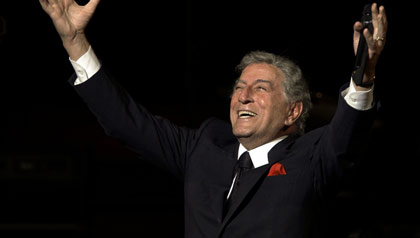 En español  |  Legendary singer Tony Bennett will team with AARP this fall in a concert to benefit AARP's Drive to End Hunger and celebrate his 85th birthday.

Bennett's concert in Los Angeles' Staples Center on Sept. 24 will come just four days after the release of his new CD Tony Bennett: Duets II and will include guest artists.  All of the concert's net proceeds will be donated to the hunger programs of AARP Foundation.

"It is terrific to be working with AARP once again, especially for a cause like ending hunger among our older Americans, which often does not get much attention," Bennett said. "I know this event will make a big difference and I am thrilled to be a part of it and have some of my favorite musical performers join me for the concert."

A vital musical artist as well as an accomplished painter, Bennett is living proof that age need not be a barrier to continuing career and other passions.

"Tony has successfully captured a whole new generation of listeners, and at age 85 he's still a consummate performer at the top of his game,” said A. Barry Rand, CEO of AARP. "Not only is he a living legend in the world  music, his dedication to giving back to the community is inspiring and we're thrilled to have him join AARP in our goal to end hunger for older people in America."

Drive to End Hunger is a multiyear commitment by AARP and AARP Foundation to ending hunger for older Americans, 6 million of whom do not have enough to eat every day. It aims to build awareness of hunger issues among older Americans, raise money for the cause and work with national partners who share the goal of feeding seniors.