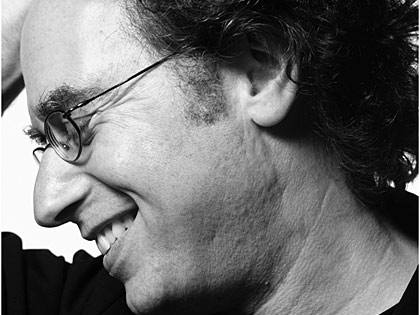 Tod Machover says he has been "obsessed" with combining the spontaneous and expressive flavor of live music with the complex richness of studio technology.

Although well known in the music world, where he's been a leading advocate of musical technology in a career spanning more than three decades, Tod Machover may go down in history as the grandfather of Guitar Hero.

Inspired by his ideas, Machover's students at MIT invented the game, which has sold more than 25 million units and brought in more than $2 billion.

According to Machover, the idea that led to the Guitar Hero goes back to his teenage love of the Beatles' Sgt. Pepper's Lonely Hearts Club Band album.

"When it came out," the composer says, it was "complex, rich and it was also the first album the Beatles made that couldn't be played live. It was made with all the wonders of technology in the studio."

That was both the album's strength, and its failing, says Machover.

"Something was missing from music that was only done in the studio. So I've been obsessed ever since with how you get the best of both worlds. How you can have music that's spontaneous and expressive, an exchange between musicians, or musicians and audience, but also has the richness and complexity that you could only do in the studio with technology."

That thought led him to invent what he calls "hyperinstruments" that allow musicians, such as frequent collaborators Yo-Yo Ma, Prince and Peter Gabriel, to translate gestures into electronic sounds. And that's what led his MIT students to take the idea to the next step, with Guitar Hero.

Machover, a professor of music and media, is head of the Hyperinstruments/Opera of the Future group at the MIT Media Lab. He also is at work on several projects that focus on using music to both diagnose and alleviate specific medical problems, such as Alzheimer's disease.

Tod Machover's Death and the Powers is a futuristic work that features one man's quest for digital immortality — and singing robots. Read