For the record, Corky Ballas does not agree with the judges' critique that his waltz with partner Florence Henderson on week three's Dancing With the Stars was too slow and simple. "The music is sweet and gentle, and that's how my waltz was," insists Ballas, who, at nearly 50 (his birthday is Christmas Day) is the senior dancer on the hit ABC series. Ever the pro, Ballas shook off the criticism and forged ahead into the following week's rumba. "We took a lot more risks, doing more intricate things and harder choreography," he says. "I wanted to show the sexy, sultry side of Florence." 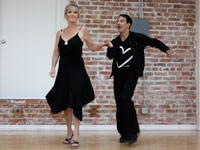 The result was a dance number so hot that judge Carrie Ann Inaba said it made her uncomfortable. But it's all in a week's work for Ballas, who admits the pace on DWTS leaves "no rest for the weary."  He and Henderson were declared "safe" that Tuesday night and the following morning began a grueling five-day schedule of choreography and rehearsing, with time out for shooting the video that precedes each couple's weekly performance.

Working with older contestants has become Ballas's niche on DWTS. In Season 7, he was invited onto the show to partner with actress Cloris Leachman, then 82. In working with Henderson, 76, he's used a combination of rigor and restraint to turn the musical-theater star — television's beloved "Carol Brady" (from the 1970s sitcom The Brady Bunch) — into a competitive dancer. His strategy was to start slow and build Henderson’s stamina and endurance by doing 30 minutes of treadmill at a 5 percent incline each day in addition to dancing.

But winning doesn't inspire Ballas as much as the sheer love of dance, which is his (almost) lifelong passion. He started dancing at six, taught by his mother, an accomplished flamenco dancer. It didn’t hurt that his father owned a 64,000-square-foot dance hall in Houston, the largest in the country at the time. Inspired by John Travolta and the Saturday Night Fever craze, "Corky" — as his father nicknamed Mark Alexander Ballas when he was born — discoed his way through his teens, dancing in competitions all across the country and coming in second-place on the TV show Dance Fever. When disco died, Ballas turned his talent to International Latin style dancing, and he became the undefeated eight-time U.S. International Latin Champion, dancing with his partner and former wife, Shirley. The team was also 1995-1996 Open to the World International Champions, three-time British National Champions and three-time International World Latin Champions.

Having retired from competition in 1996, Ballas devotes most of his time to judging professional competitions and teaching. But dancing is also a family affair, and Ballas is something of the paterfamilias on DWTS. He trained his son Mark (who is partnered with Bristol Palin) as well as Derek and Julianne Hough, a brother and sister whom he helped raise. (Derek has been leading the pack this season, dancing with Jennifer Grey.) Ballas was also teacher to Anna Trebunskaya (dancing with NFL Star Kurt Warner), Tony Dovolani (dancing with The Hills reality star Audrina Patridge), Chelsie Hightower (who was voted off with Michael Bolton), and Karina Smirnoff (who was voted off with Mike "The Situation" Sorrentino).

Although Henderson got the boot on week 5, Ballas took it in stride. After a lifetime of dancing he is accustomed to the highs and lows of competition. He and Mama Brady gave it their best. And Ballas is still just overjoyed that DWTS has ignited an appreciation for ballroom dancing. "I'm doing this for the love of the show and love of dance. This has awakened my industry," says the man for whom fancy footwork is a way of life. "People ask me if I'm nervous on Tuesday nights. No, for me it’s just another day at the office."