En español | You thought Mark Ruffalo got angry as the Incredible Hulk? Wait until you see him in Dark Waters (Nov. 22), a movie he stars in and produced. He plays Robert Bilott, a real-life lawyer who attributed health catastrophes in low-income Midwestern communities to chemical dumping. Ruffalo tells AARP about a story that he finds “stranger than fiction.”

What kind of movie ‘Dark Waters’ is

I had no idea about this story, this huge cover-up that spans decades. We come to find over and over again that government is actually beholden to a corporate system, and we're being harmed. I saw this as a great environmental film, a horror flick and a whistleblower story. It had all the elements I love.

You can't help it. I was in an MRI like that so many times. I did have my wife lying next to me as I slept, wondering what the future was going to be. Of all these really difficult things you go through in life, if you can put it into art in some way, then they have meaning. They're elevated from the banal and mundane — you take the bad luck of life and make it into something meaningful. 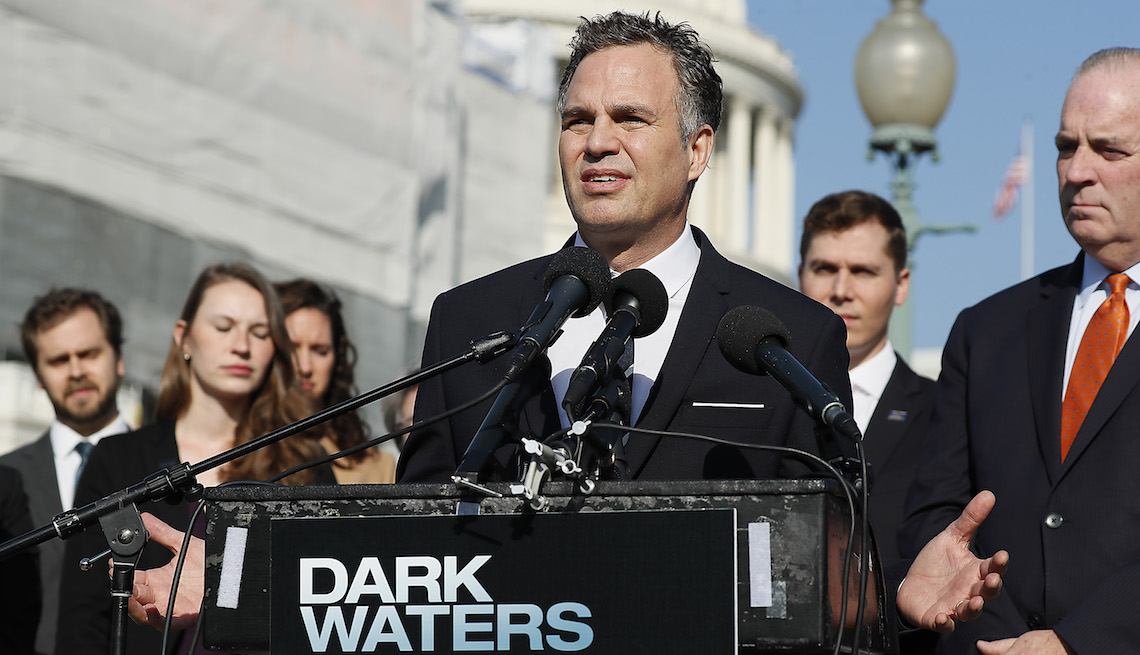 Top critical hits: Spotlight, You Can Count on Me, Eternal Sunshine of the Spotless Mind

Oscar nominations: Spotlight, Foxcatcher, The Kids Are All Right

Top TV shows: The Normal Heart (Emmy nomination), I Know This Much Is True (coming in 2020)

“The extra burden of a partner having to take care of the house and kids when you’re crusading, that is something I’ve had to struggle with over the years.”

I come from the tradition of the Group Theatre. Stella Adler was my teacher. Part of the Group's ethos was that theater could inform the public.

We both came up in the L.A. theater scene. He was an inspiration. He's always been outspoken, and even though he's been maligned viciously, he's never been wrong.

I was having a crisis of confidence until the moment we started shooting. Anne asked what was the matter. I said, “I don't think I can do this.” She was like, “What are you talking about? You've been doing this for years, you developed this movie. Nobody knows this better than you. And don't you think Robert felt this way at times, too?” She gave me this pep talk, and I realized lying in bed in my hotel that night that she was right. And in that moment, in that vulnerability, we became a couple [onscreen].

How his blue-collar roots affected the film

What a star can do after a success like ‘The Avengers’

I don't know yet. I saw Marvel Studios President Kevin Feige at the Hollywood Film Awards, and he said, “So, do you think there's more?” And I said, “Yeah, I think so.” He's like, “Why don't we talk about it?” So who knows? It may not be the end.

Does he think about retiring?

I do. I feel like I'll always be active in some way, but I think about the idea of taking the time to stop and reflect. My friends and family call me “the shark” because I'm always moving forward. I have chairs and couches in my house I've never even sat on. But when I hit 50, I suddenly got reflective. At first that was scary to me, like, “Why am I thinking about the past so much?” But now, I find some comfort and joy in it. I like the reflective quality retirement might offer. I want to see more of my family and friends. But it'll be interesting to see how I fill my time.