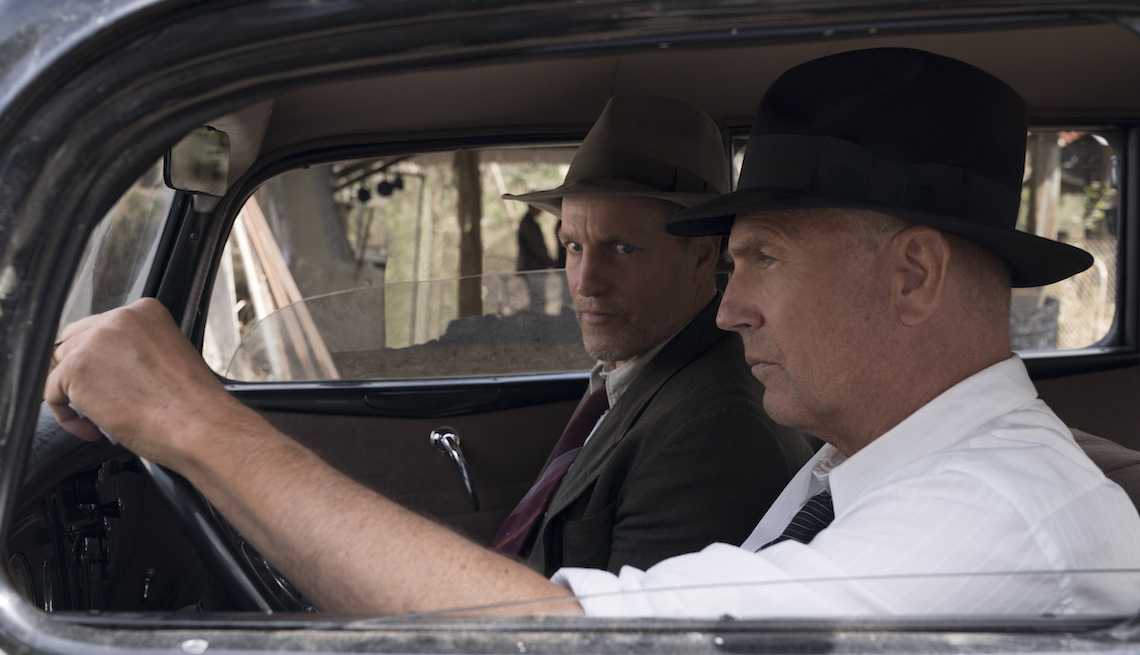 The Highwaymen is as dry and flat as the Texas plains where it's set — and that's a compliment. This is high-quality, straight-shooting filmmaking from John Lee Hancock (The Blind Side). His loping retelling of the Bonnie and Clyde legend focuses on the Texas Rangers who turned the young bank robbers into Swiss cheese in 1934 after an intense interstate man-and-woman hunt.

With Kevin Costner, 64, as retired Ranger Frank Hamer tapping his old partner Maney Gault (Woody Harrelson, 57) to boldly, if creakily, go where the FBI has failed to catch the larcenous lovers, the star wattage is high even when the tension is turned to very slow burn.

Age hasn't dimmed Costner's leading-man charisma. As a lawman of few words with an itch for justice, he carries the movie as if it were as light as the handkerchief he keeps using to dab the sweat from his lips. Sure, the skin is a little looser under his chin, and when he chases a young ginger boy carrying messages for the outlaws, he can't jump the fence between them because his belly is in the way — but that only means he has to rely on his wits a bit more.

While Costner has, over his career's course, largely played the good guy (and Hamer is certainly a variant of his Eliot Ness in The Untouchables), Harrelson is the switch hitter. From TV's Cheers to Natural Born Killers to Three Billboards Outside Ebbing, Missouri, Harrelson has the range to be heroic and dangerous — sometimes in the same scene. Harrelson's lesser-known gift as an actor is his generosity. In The Highwaymen, his shambling, perfectly calibrated counterbalance to Costner's stoicism adds layers and richness to their interactions.

Texas is as much of a character as Hamer and Gault. The vintage autos and two-toned spectator shoes are as exquisitely rendered as any in Downton Abbey. And the car chases on unpaved roads — particularly one in which Clyde Barrow (Edward Bossert) leaves the Rangers in a cloud of dust — are sharply rendered and exciting.

Making strong but small support are Kim Dickens, 53, as Hamer's wealthy wife and Kathy Bates, 70, as Gov. Miriam "Ma" Ferguson. As the outlaws, diminutive Emily Brobst and Bossert only have a glimpsed presence, cameos in their own crime saga. Ironically, in flipping the script on Arthur Penn's classic 1967 beauty-and-blood fest Bonnie and Clyde, which paired Warren Beatty and Faye Dunaway as the legendary Romeo and Juliet of outlaws, Hancock's movie all but erases the feminine presence that made that deadly duo both infamous and celebrated.

The love story here is purely man-o a man-o, between undemonstrative lawmen Hamer and Gault as etched by the symbiotic and uniquely satisfying performances of Costner and Harrelson.