(Video) Eddie the Eagle Movie Trailer: The story of Michael Edwards, the notoriously tenacious British underdog ski jumper who charmed the world at the 1988 Winter Olympics.

En español | The idea of making a film based on the unlikely story of beloved British Olympic ski jumper Michael "Eddie" Edwards has intrigued filmmakers for decades. Now someone has finally done it, and Eddie the Eagle was worth the wait; this delightfully satisfying underdog story is sweetened by an endearing cross-generational tale of friendship and redemption.

The delay was fortuitous, too: Not only has enough time passed to make Eddie's tale seem new, but we can also forgive the factual liberties taken in recalling the short, glorious career of a man who came from nowhere and, in the course of registering one of the worst Olympic performances on record, became a worldwide hero.

For those who don't know what I'm talking about — and judging from the blank looks on friends' faces when I raise the topic, you are legion — Michael "Eddie" Edwards was a 20-something British plasterer and recreational skier who, realizing that Dear Old England lacked a national ski-jumping program, set out to qualify for the country's 1988 Olympic team.

Eddie himself was not about to let his modest talents stand in the way. He was so nearsighted he could not remove his glasses on the slopes — a problem, since they fogged up whenever he donned ski goggles. His protruding chin evoked Popeye; he outweighed his fellow jumpers by 20 pounds; and his working-class accent and mannerisms were foreign to the toffs who dominated Britain's Olympic-athlete culture.

All of which, naturally, made him one of the most popular figures of the 1988 Calgary Winter Olympics. Even though Eddie finished dead last in his two events, the president of the Olympic committee made a point of honoring him personally at the closing ceremonies.

In Eddie the Eagle, our hero is played by Taron Egerton (the appealing young actor from 2014's Kingsman: The Secret Service). Though movie-star handsome in real life, Egerton manages to convey Eddie's social awkwardness largely by adopting the odd, upside-down smile that gave the ski jumper a perpetually perplexed mien.

Eddie had more than one coach, conflated here into an almost certainly more interesting character: Bronson Peary, a washed-up former ski prodigy played by Hugh Jackman. Try as he might, the ever-dapper Jackman can't quite persuade us he's an aimless, booze-soaked has-been. But Jackman is one of cinema's most reliably engaging actors, and his easy charms fall on the film like a welcome overnight cover of light powder. 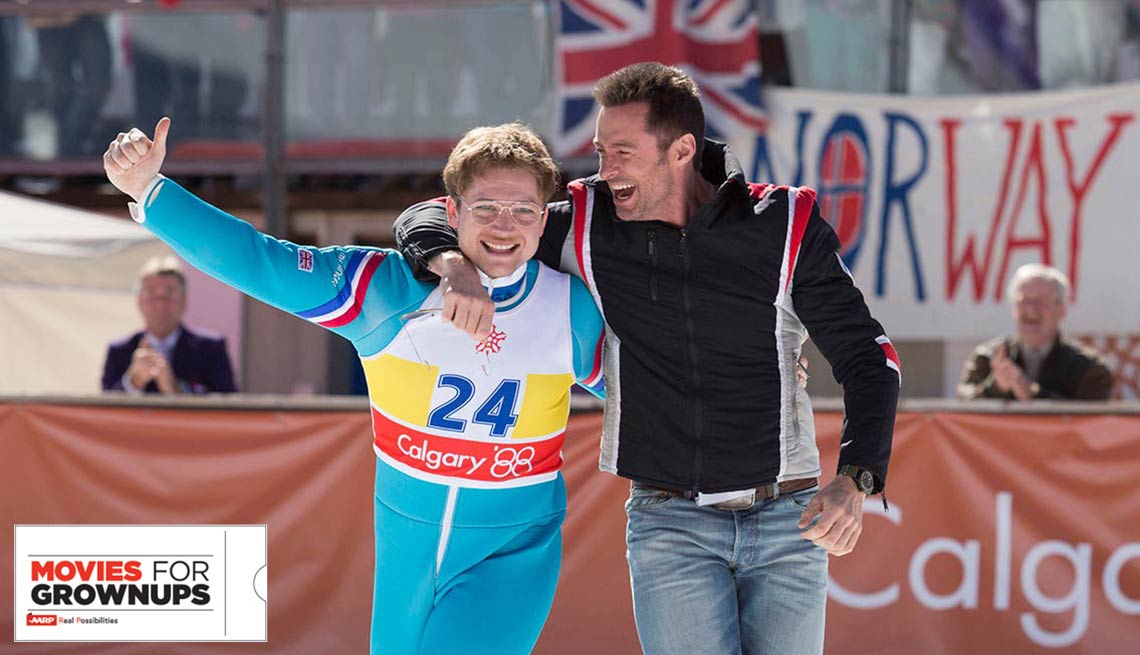 Though two of them are uncredited (don't ask me why), familiar faces pop up throughout Eddie the Eagle. Ubiquitous Jim Broadbent plays an enthusiastic sportscaster, while Christopher Walken channels a former Olympic coach who once threw the high-living Peary off his team. And then there's Iris Berben, the veteran German actress who plays the sexy owner of a ski-lodge pub who takes in the penniless Eddie. It turns out the sultry, smoky Berben has been a TV star in Europe since the 1960s, making me ask the screen, "Wo warst du mein ganzes Leben lang?"

Director Dexter Fletcher hits all the requisite notes in telling Eddie's story, pausing occasionally for set pieces that form the heart of the movie: Eddie's relentless assault on a 40-meter ski jump that seems determined to kill him; his triumphantly silly celebration at the end of his first Olympic jump; and, most fun of all, Peary's impulsive, boozy slide down a 90-meter hill, casually flicking a lit cigarette from his hand as he approaches takeoff.

Does Eddie the Eagle play it too safe? Maybe. But even if it shuns the black-diamond slopes, this easygoing run succeeds in delivering us smoothly to the bottom, ready for a crackling fire and some hot cocoa.