(Video) Billy Lynn's Long Halftime Walk Movie Trailer: 19-year-old Billy Lynn is brought home for a victory tour after a harrowing Iraq battle. Through flashbacks the film shows what really happened to his squad — contrasting the realities of war with America's perceptions.

The easy route for two-time Oscar winner Ang Lee would have been to take a handheld camera and shoot Billy Lynn's Long Halftime Walk as an intimate, narrowly focused psychological drama.

Veterans Day Membership Discount: Save up to 30% on AARP membership in November

But Lee, who tackled cowboy love in Brokeback Mountain and the story of a boy and his tiger in Life of Pi, has not a single easy path programmed into his creative GPS. This time, to tell the story of a young Iraq War hero trying to square the growing legend of his battlefield exploits with what really happened out there, Lee essentially reinvents moviemaking technology: Casting aside virtually every convention of film acting and cinematography, he has created an entirely new method of cinematic storytelling.

It's a daring concept. And even though Billy Lynn doesn't quite march to a rousing victory, the film provides a tantalizing glimpse of what may be in store for big-screen moviegoers in decades to come.

The story is simple enough: Soldier Billy Lynn, lauded for trying to save his sergeant (Vin Diesel) during a raging desert battle, is now being paraded around the United States with his unit. The propaganda victory tour will culminate in a lavish NFL halftime show in Texas. But between flashbacks of the events surrounding his heroic moment, Billy reflects on the futility of war, the sense that he's being used — and the repeated pleas from his sister (Kristen Stewart) that he cite PTSD and refuse to return to the front. 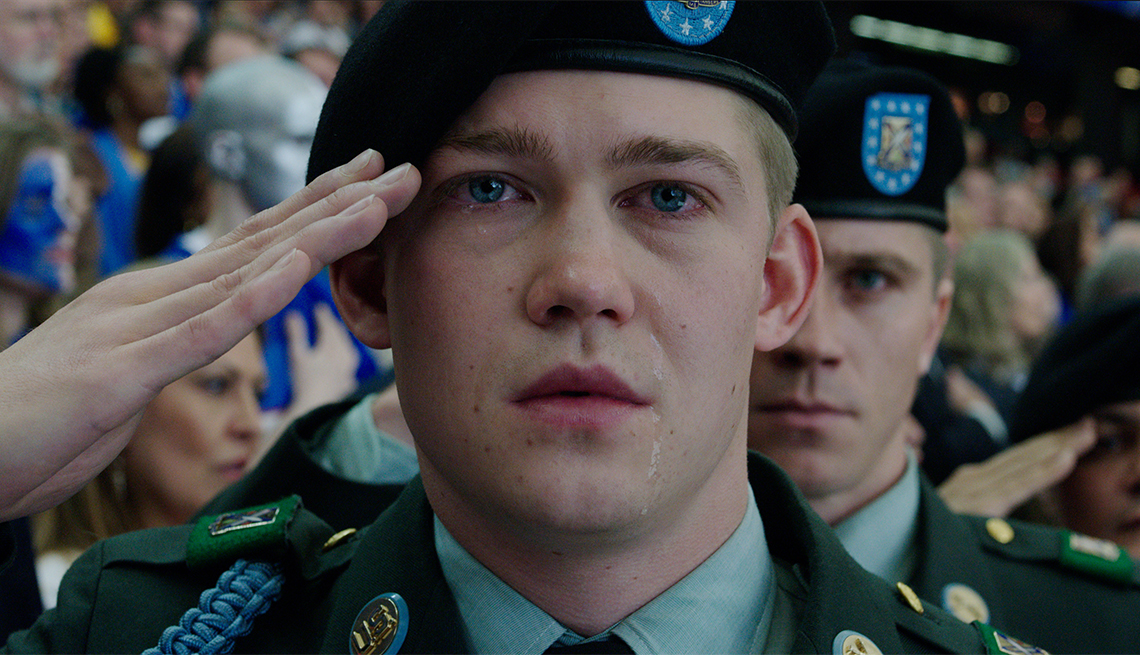 Joe Alwyn portrays Billy Lynn, a soldier returning home from the war in Iraq while also grappling with PTSD.

The technological advances that Lee uses to tell this story may sound like hopeless geekery, but even the most casual moviegoer will be bowled over by their combined effects. Lee shot the movie at 120 frames per second (most films use just 24), so the action scenes blur not at all; there is no "jitter" as the camera pans. Additionally, the movie is in 4K resolution — four times as sharp as a conventional film. Add 3-D glasses, as many theaters will, and the audience is flooded by visual information with every frame.

In fact, the final result does not resemble a conventional movie at all. One's first impression is of a very high-def TV image, this one 40 feet high. As the film progresses, though, the viewer has the creeping sensation that both screen and theater have dropped away. It is, in a very convincing sense, an exercise in virtual reality.

That's the good news. The not-so-good news is that just about everything we expect from screen acting, screen makeup and screen editing was developed a century ago in the world of nitrate film projected at 24 frames per second; even many digital movies use electronic filters to re-create the shimmering look of film emulsion. While shooting Billy Lynn with his new technology, however, Lee discovered that makeup didn't look right. He therefore required his players to go au naturel (cosmetically speaking).

Not only that, but because Lee discerned that quick edits at this resolution level — to say nothing of being in 3-D — could be disorienting, many of his shots last much longer than audiences are accustomed to. Finally, the conventional "over-the-shoulder" angle — in which the camera shows someone speaking from a vantage point behind the listener's shoulder — struck Lee as unacceptably artificial in this new technique. So here each character directly addresses the lens — effectively positioning the audience behind the listener's eyeballs.

If nothing else, Lee might want to rethink that last point. With the higher resolution and frame rate already placing viewers uncomfortably close to the action, the sight of Steve Martin (to cite just one startling example) looming like Zardoz just a nose-length away tends to turn us aside rather than draw us in.

Martin does a good job channeling a Jerry Jones-type NFL owner, yet he and the other veteran actors — including Stewart — appear discomfited by Lee's unblinking eye. Newcomer Joe Alwyn (Billy Lynn), by contrast, seems uncannily natural, as do the young actors who play his comrades in arms. (If Lee's brave new world comes to pass, might we see a culling of the herd similar to what happened when sound arrived in Hollywood and only the sonorous survived?)

In a media landscape that prizes immersive experiences, Lee's experimental film delivers some tangible rewards. Especially in the climactic scene, as stadium fireworks spark graphic battlefield memories in our hero's mind, Billy Lynn's Long Halftime Walk is positively transportive. Movies always induce something like a dream state, but as the bombs explode, the shrapnel flies and the sounds of battle meld with those of a throbbing marching band, the effect here is more like a hallucination.

Once Ang Lee works the bugs out, his new brand of moviemaking might change everything.