In Tammy, Melissa McCarthy finds a sweet, vulnerable side to counter the loudmouth-lout persona that made her a star. If the transitions between the two aren't always smooth, at least she has discovered a way to inhabit the center of a movie without exhausting the audience.

Here she plays Tammy, a graceless loser who, having been fired from her fast-food job, comes home at midday to find her husband (Nat Faxon) romancing a pretty neighbor (Toni Collette, oddly given barely a dialogue line). Tammy storms off to the home of her parents (Allison Janney and Dan Aykroyd), grabs the keys to her grandmother's car and takes off on an impromptu road trip. Did I mention that the car's owner, Pearl — a foul-mouthed alcoholic played by Susan Sarandon — goes along for the ride? 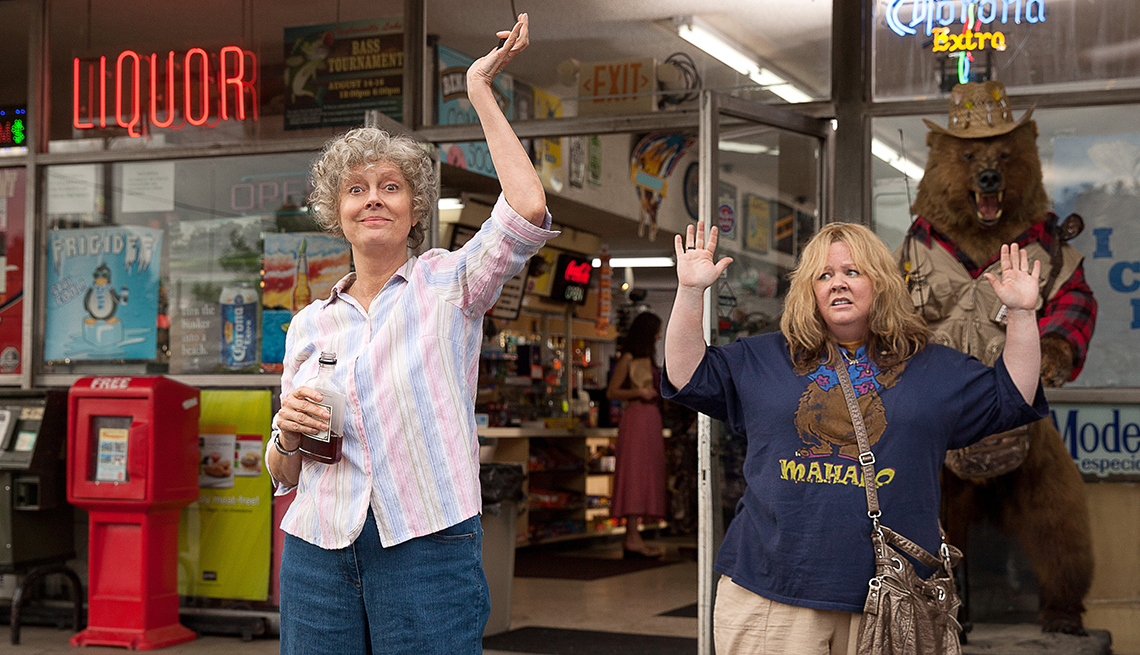 It's all a setup, of course, to get McCarthy and Sarandon behind the same windshield. They make a great team. McCarthy, modulating her performance in unexpected ways, is clearly feeding off Sarandon's cool professionalism. And Sarandon, who seemed doomed to forever play a rotating series of angry D.A.s and repressed wives, revels in this chance to fly her freak flag.

For a road-trip movie, Tammy spends surprisingly little time on the road. Almost immediately the two stop at a roadhouse, where Pearl becomes smitten with a lady-killer farmer named Earl (Gary Cole). They head off to canoodle, leaving Tammy to flirt outrageously with Earl's charming son, Bobby (Mark Duplass of TV's The Mindy Project). Proving that love is both blind and deaf, Bobby finds himself curiously drawn to this wailing train wreck of a woman.

McCarthy cowrote Tammy with her husband, Ben Falcone (who also directs), and it's clear the couple are charting a future course for the star. Short-tempered Tammy does take off on some vintage improvised McCarthy rants, but she also gets lots of opportunities to show her humanity. McCarthy tugs gently on our heart strings when Tammy hits a deer in the funny opening sequence; when Pearl embarrasses her in a drunken rage; and when she realizes her philandering hubby has cooked dinner for his girlfriend ("You never cooked for me," she tearfully laments, "and it smells good!").

Tammy starts out as a chaotic mess but has to muster responsibility when it falls to her to bail Pearl out of jail (don't ask). She takes command of the situation — albeit by robbing a fast-food joint.

Pulling one paper bag over her head and pretending to conceal a gun inside another, she ineffectively browbeats the two hapless employees on duty, in the end expressing the hope that they can all be friends some day. It's the funniest scene in the movie — not because of McCarthy, but thanks to little-known Sarah Baker as the deadpan clerk who keeps unhelpfully pointing out all the ways in which Tammy is inept at robbing people. Thus does McCarthy, who in small roles walked off with both Bridesmaids and This Is 40, fall victim to the same type of theft in her own star vehicle.

The celebrity wattage on display in Tammy is nearly blinding: The cast members (who also include Kathy Bates and Sandra Oh as a lesbian couple who shelter Tammy and Pearl) boast 12 Oscar nominations among them. None of them will be adding a statuette to their collection via Tammy, but McCarthy still walks away a winner.