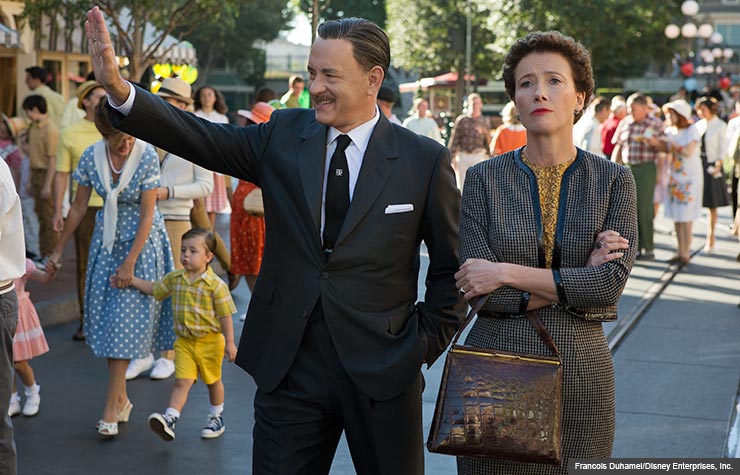 The first film Emma Thompson ever saw in a theater was Disney's Fantasia, that surreal animated celebration of classical music. "It was pretty scary, all that," says Thompson, 54, of the bewitched brooms and the bat-winged demon who summons dead spirits. "I saw it again recently, and it is remarkably frightening."

As Mary Poppins author P.L. Travers in Disney's Saving Mr. Banks, Thompson gets to be pretty scary herself. The movie chronicles the prickly writer's stormy relationship with studio founder Walt Disney (played by Tom Hanks) over the movie adaptation of her children's-book series, as well as the writer's troubled childhood in Australia. Thompson has declared the writer "the most difficult person I've ever played."

Travers is depicted as being especially hard on the Sherman brothers, Robert and Richard (played by B.J. Novak and Jason Schwartzman), the legendary songwriting team behind such Mary Poppins movie tunes as "Chim Chim Cher-ee" and "A Spoonful of Sugar."

"Whilst I have sympathy for her, she was very nasty to them," Thompson says. "She found it impossible to let go and allow her creation to be transformed in some way."

The psychological story behind the Disney-Travers relationship is interesting, Thompson says. Although working with Hanks — her on-screen adversary — was "heaven," she adds, they get to show "an unusual relationship between a man and a woman. It is quite peculiar — two bonkers artists at loggerheads."

Saving Mr. Banks proved hair-raising for both Hanks and Thompson. He had to sprout a mustache; she had to submit to a perm, because she prefers not to wear wigs. "It was the worst thing ever," says the actress. "My hair designer swore to me it was not a perm and more like a little kink. But it was a vicious perm, and it was desperate."

Thompson, who won a 1995 Academy Award for adapting Jane Austen's Sense and Sensibility for the screen, is now writing the script for a third Bridget Jones movie and getting her voice in shape to perform a concert version of Sweeney Todd opposite Welsh opera singer Bryn Terfel at Lincoln Center in New York next year.

Does she think that Travers would have enjoyed Saving Mr. Banks more than Disney's Mary Poppins?

"She would have liked it," Thompson says, "but she would have taken issue and said about the Shermans, 'I was much nicer to them than that — and they deserved it anyway.' "

What we love and hate as the year unfolds.